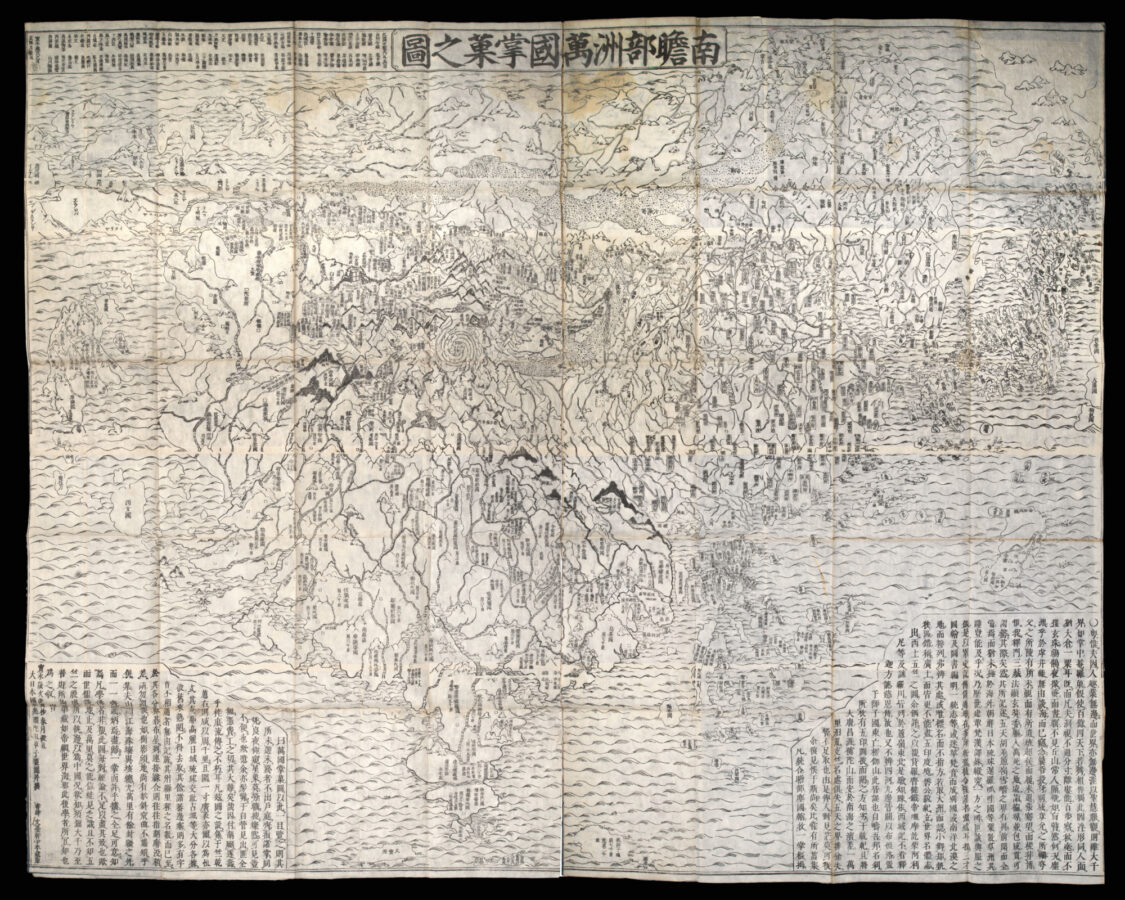 The first Japanese printed map to depict the world, including Europe and America, from a Buddhist cosmographical perspective. The author, Soshun Hōtan (1654–1728) was a scholar- priest and founder of the Kegonji Temple in Kyoto.

The earliest known world map in Japan is the Gotenjiku Zu (Map of the Five Indies) by the priest Jukai dating from 1364 and now preserved in Hōryū-ji Temple in Nara. However, Hōtan’s map was revolutionary in being the first printed Oriental map to introduce detailed Western cartographic information into this traditional Buddhist cosmological view, and to attempt to merge the two together into a comprehensible form. It became the prototype for all subsequent Buddhist world maps printed in Japan until the late nineteenth century.

Europe is depicted as a series of islands in the upper left of the image, whilst South America is likewise another island in the lower right of the image. Africa is omitted completely. China and Japan are clearly defined in the upper right of the map. The popularity of the map is evidenced by the fact that although the map is dated 1710, it was reissued unchanged in numerous editions through to about 1815 and spawned innumerable copies and derivatives over the next 150 years.

The text is Chinese, except for a few Japanese characters on the illustrations of European countries. Europe is shown at upper left as a group of islands, which can be identified from Iceland to England, Scandinavia, Poland, Hungary and Turkey, but deliberately deleting the Iberian Peninsula. At lower right South America is featured as an island south of Japan with a small peninsula as part of Central America, only a few place-names appear but include four Chinese characters whose phonetical Japanese reading is ​“A‑ME-RI-KA”. North of Japan, a land bridge joins Asia with an unnamed landmass, presumably North America. Africa is not shown at all.

This map is much more than a world map and the main concept by the author was to celebrate a historically very important event. The map echoes the pilgrimage route of the famous Chinese Buddhist priest Hsuan-Tsang (or Xuan Zhuang, Genjo in Japanese, 602–664 A.D.), who travelled to India to visit sacred places of Buddhism and also to collect holy sanskrit writings. So the largest part of the map is depicted to ​“Jambu-Dvipa” with the sacred Lake of Anavatapta (Lake Manasarovar in the Himalayas) at center, from which the 4 rivers Ganges, Oxus, Indus and Tarim flow. This all was based on the Japanese version of Hsuan-Tsang’s Chinese narrative, the Si-yu-ki, printed as late as 1653. Here numerous details are given, including the interesting feature of the so-called ​“iron-gate”, shown as a strongly over-sized square, and the path taken by the monk whilst crossing the forbidden mountain systems after leaving Samarkand. In the upper left corner 102 references from Buddhist holy writings and Chinese annals are mentioned to increase the credibility of the map.

This copy is the rare second state. According to Toshikazu Kaida, only five copies have been recorded, including one copy at the East Asia Library, University of Washington, and two copies that have come on the market in the past five years. 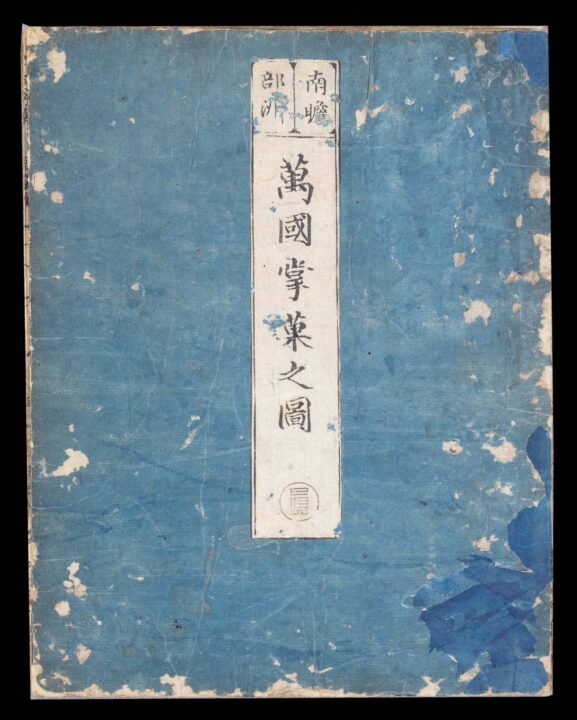