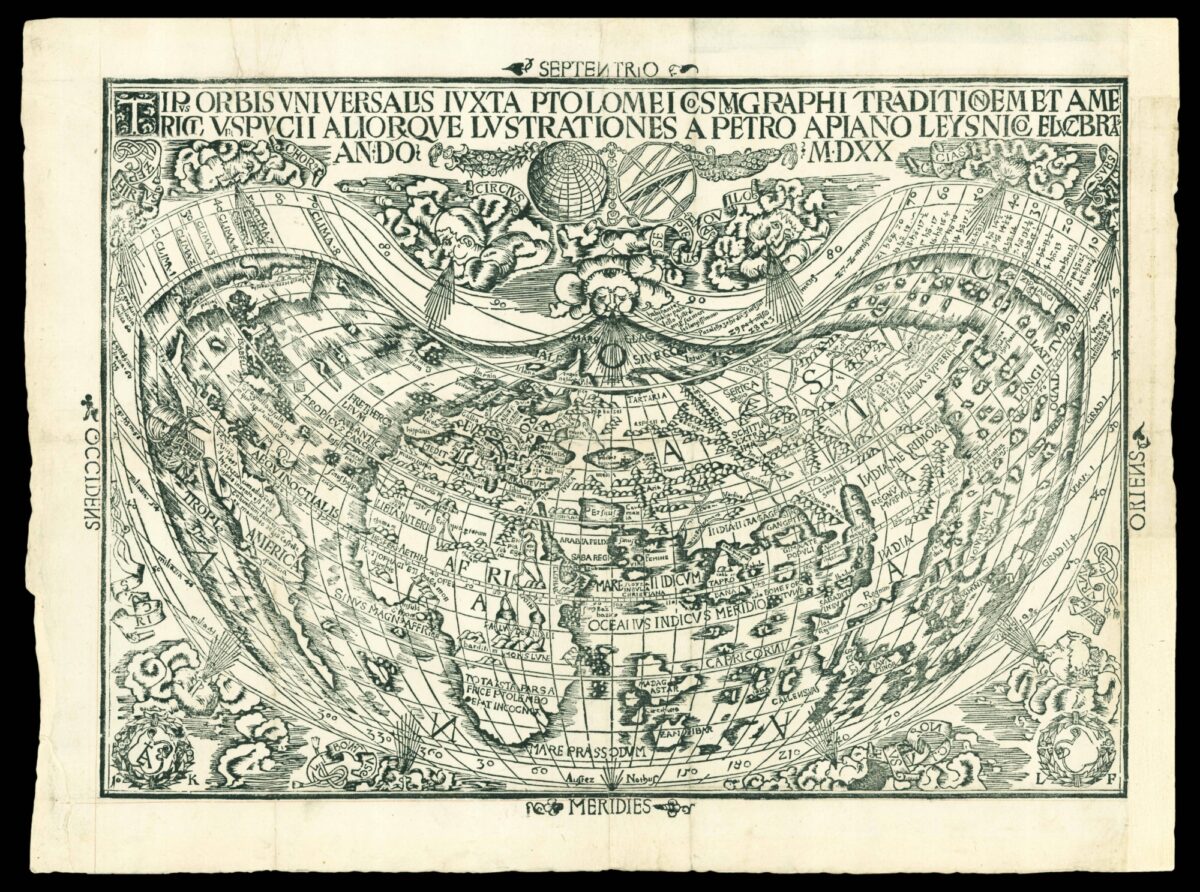 The first available printed map to bear the name America

Petrus Apianus’s 1520 world map is one of the most important early maps of the world, and the earliest map available on the market to name America. The only printed map to use the name ​“America” before Apianus’s work is Martin Waldseemüller’s 12-sheet map of the world, the sole surviving example of which was discovered in 1901 and purchased by the Library of Congress in 2001 for ten million dollars.

Apianus drew heavily on Waldseemüller’s map to create this work, with ​“a close geographic correspondence, a similarity of woodcutting style, and the same truncated cordiform” (Shirley). He also possibly used the globes of Johannes Schöner. It is one of the earliest maps to show the Americas as separate from Asia. However, Apianus made one significant addition of his own: a passage between the Atlantic and Pacific Oceans at the tip of South America, which is not present in Waldseemuller’s map. Ferdinand Magellan began his voyage to find such a passage in 1519, the year before Apianus’s map was published but the expedition would not return until September 1522. This map has been used in support of the theory that Magellan was aware of prior voyages that had reached the Pacific, of which we have no record.

Martin Waldseemüller’s map was produced to accompany the ​‘Cosmographia introductio’, published in collaboration with Matthias Ringmann and Jean Basin de Sendacour in 1507. It contains the first printed instance of the name ​“America” being applied to the discoveries over the Atlantic: ​“The fourth part of the earth, we have decided to call Amerige, the land of Amerigo we might even say, or America because it was discovered by Amerigo”. Waldseemüller himself was reluctant to identify America as a continent, and would never use the name America again. When he published his edition of Ptolemy in Strasbourg in 1513, he labelled South America ​“Terra Incognita”. However, nearly every significant mapmaker for the next quarter of a century relied on his work, popularising his geography and terminology. Apianus’s map, made thirteen years later, shows the effects of Waldseemüller’s map. Vespucci is referenced in the title and there is an inscription in South America reading ​“Anno d[omini] 1497 hec terra cum adiacetibo insulis inuenta est per Columbum Ianuensem ex mandato Regis Castello america princia”.

However, although the name America is retained, it is Columbus’s discovery of the ​“adiaceti[bus] insulis” or adjacent islands to America which is brought to the fore. This is possibly due to contemporary controversy over Waldseemüller’s championing of Vespucci, seemingly at the expense of Columbus: a historical debate which continues to this day. Apianus’s use of the name ​“America” here and in ​‘Cosmographicus Liber’ would continue to popularize it, and before the rediscovery of Waldseemüller’s work in 1901 it was thought to be the source (Stevens).

​“The map appeared in a 1520 edition of Julius Caius Solinus’ ​‘Polyhistor’, a third century compilation of history and geography, based largely on the works of Pliny and Pomponius Mela. It may also have been issued separately. It was published by Johannus Camertius, whose initials appear in the lower left corner, on either side of a garland containing the monogram of Luca Alantses, who paid for its production” (Shirley). The engraver of the map was almost certainly Laurent Fries, whose initials appear on either side of the garland at the lower right corner. In 1522, Fries would complete an updated edition of Ptolemy’s ​‘Geographiae’, including two world maps derived from Waldseemüller. 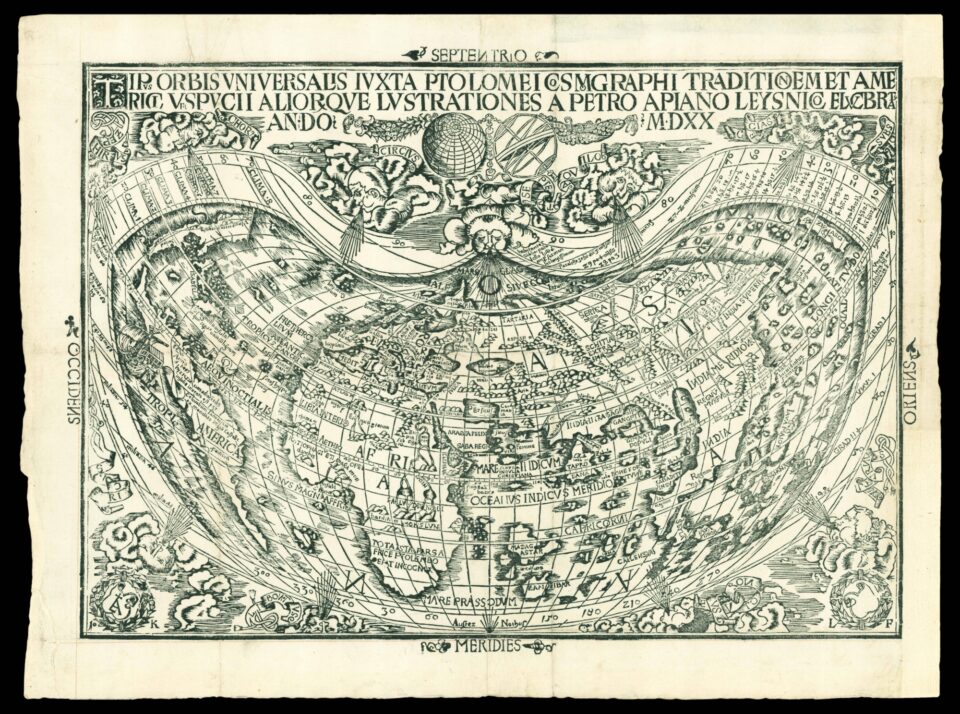