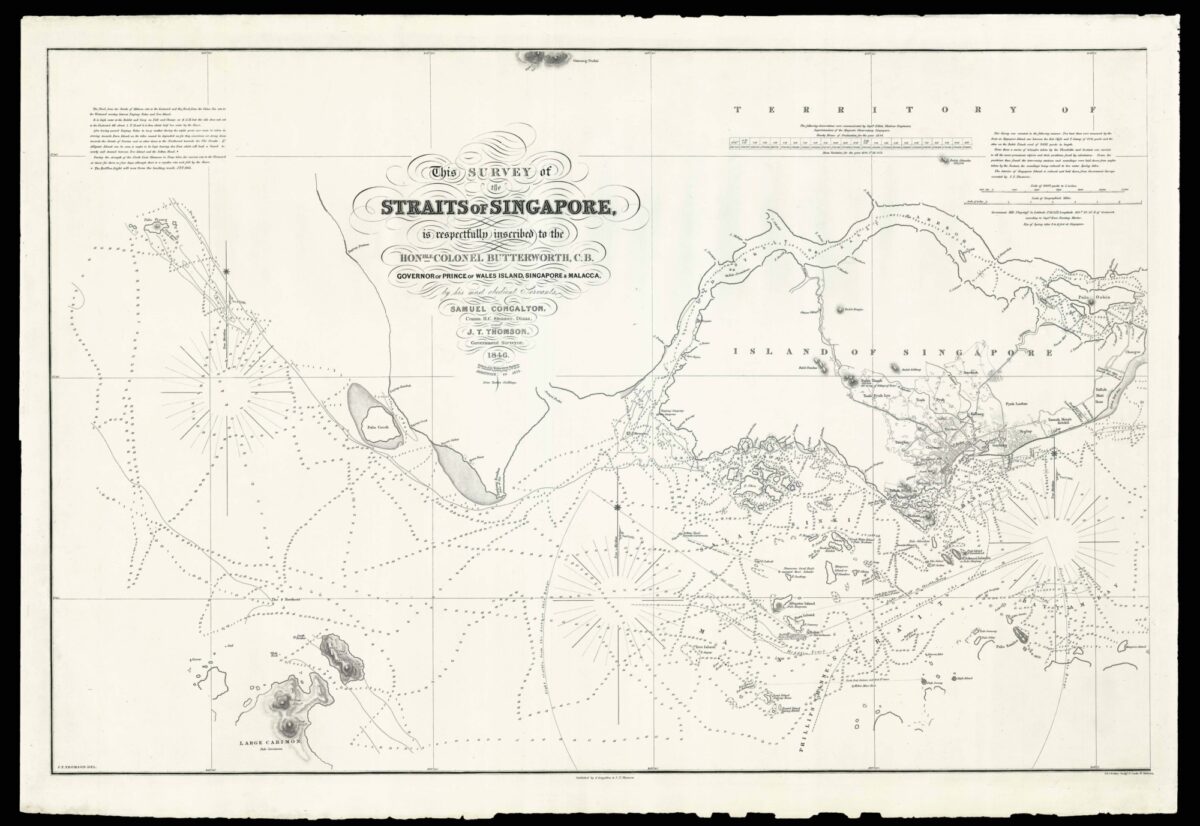 The first and most important chart of the Singapore Strait

[Western half only] This Survey of the Straits of Singapore is respectfully inscribed to the Honble Colonel Butterworth C.B. Governor of Prince of Wales Island, Singapore & Malacca, by his Most obedient Servants, Samuel Congalton, Comm: H.C. Steamer, Diana, and J.T. Thomson, Government Surveyor, 1846. London: S. Congalton & J.T. Thomson. Richardson Brothers, 1846. Additions to 1855.

This chart of Singapore was the result of the first detailed hydrographic survey conducted in the region. At the remarkably young age of 20, John Turnbull Thomson was appointed Government Surveyor in the Straits Settlement, and spent his first three years in the role mapping Penang and Province Wellesley. As British trade with China, India and Singapore grew during the 1840s, the amount of traffic passing through the Strait increased significantly, making it essential to have access to an accurate and reliable chart of the waterway. For this reason, Thomson directed the first systematic survey of the Singapore Strait, alongside Captain Samuel Congalton. Congalton was the commander of two East India Company steamships, and during his 29 years with the company became well-regarded for clearing the region of pirates, as well as for providing precise soundings for a range of hydrographic surveys. Together Thomson and Congalton produced a comprehensive chart of the Singapore Strait in 1846.

It shows Singapore Town in some detail, but it is for the navigation of the waters that this chart was so important. Although Thomson would go on to produce topographical surveys of the island itself, as well as surveys of the Malay Peninsula, this chart is his most important work. There had been rudimentary charts of the Strait for hundreds of years, but this map offered a radical improvement, with accurate information about the waters, coastline, approaches and obstacles that sailors needed to know in order to safely navigate the region. The expansion of the British Empire during the nineteenth century gave rise to great advances in hydrographic and surveying techniques, as demand increased for reliable and uniform representations of new routes, both by sea and on land.

After falling ill with Malaria in the late 1840s, Thomson returned to England, but this did nothing to halt his enthusiasm and dedication. During his years at home, he continued to study architecture, engineering and surveying, providing plans for the Horsburgh Lighthouse that was later constructed on Pedra Branca to the east of Singapore. Upon his return to the island in 1854, Thomson added several features to his surveying, including the lighthouse, and a newly-updated chart was published the following year. The present chart is the western half, showing the island and bearing the title and imprints. In the upper left corner, a note discusses flooding patterns and seasonal changes, while on the opposite side there is an explanation of how the survey was carried out. Below this the scale is found, and to the left a small table presents data on the hourly means.

Rare. We were able to locate only one complete institutional example held by the National Library of Singapore. We were unable to find another example appearing at auction in the last 50 years.