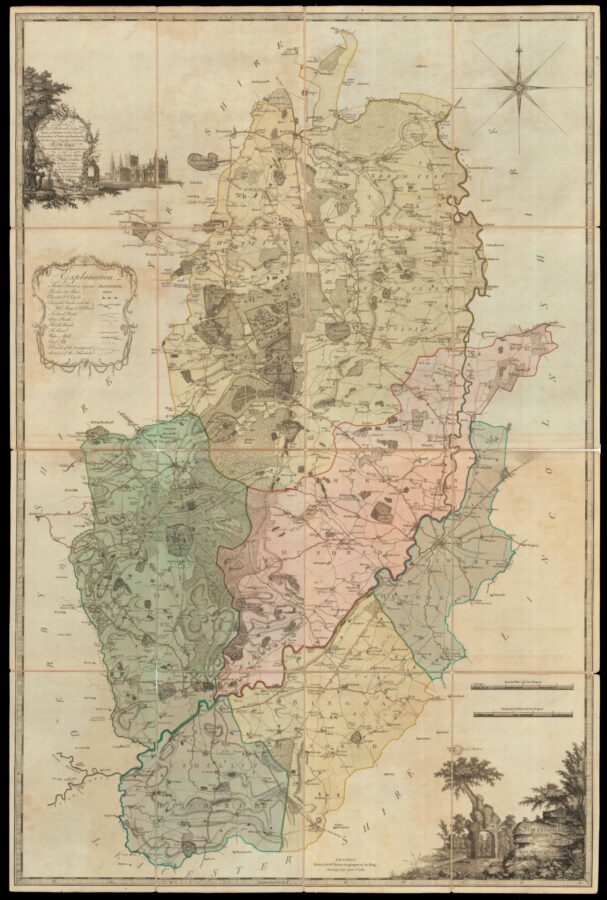 The county was first surveyed by Thomas Jefferys in 1767 but considered too inaccurate to publish and it was left to John Chapman to produce an acceptable survey which was completed in 1774, three years before his celebrated 25-sheet map of Essex with Peter André. He also engraved William Yates’ 1 inch survey of Warwickshire. The Nottinghamshire map is less detailed than the Essex survey even allowing for its smaller scale, but it is a competent piece of work, beautifully engraved, with two attractive title cartouches, nicely balanced in two diaginally opposite corners. The detail includes market towns and parishes, castles, churches and chapels, hills and woods, parks and commons, rivers, canals and water-mills, coal-pits, the boundaries of the county, and of the hundreds, and turnpikes, open, enclosed and bridle roads, the former with milestones and distances both locally and from London. The dedication to the ​“Rector of Kirkby, John Kaye, Chaplain of the King and a Fellow of the royal and Antiquarian Society”, a neat move that would help lend credibility to the publication. The first edition was published in 1776, the second and the two subsequent editions being published by Faden, who had purchased the plates at auction for 45 guineas in 1784, but the dark impression and strong plate line of the present second edition is a clear indicator of the very small number published.