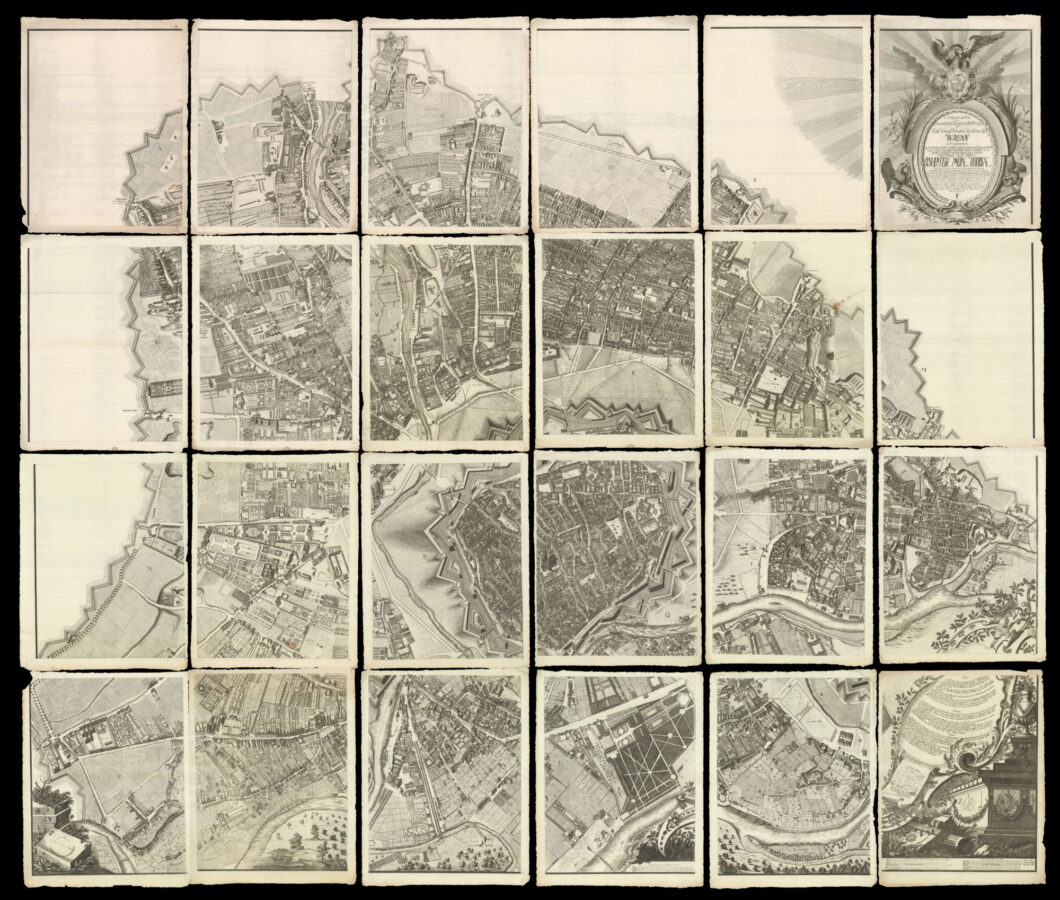 The finest and largest plan of Baroque Vienna

Joseph Daniel von Huber (c1730-1788)
After completing his education at the academic grammar school in his native Vienna, Joseph Daniel Huber joined the Military Engineering Academy in 1751, at the age of 21. The Academy, which was the oldest educational institution of its kind in Austria, trained its students in the fields of mathematics, geometry, mechanics, geodesy, hydraulics and Festungsbaukunst, or fortress studies. During his studies, Huber produced a map of Klagenfurt, which probably represents his first official foray into surveying and cartography.

He then joined the Austrian army under Generalquartiermeiseter Count Johann Franz Anton Quasco, whose job it was to locate prime positions for the army to make its camps and facilitate travel between them. Knowledge of the landscape, roads and rivers was therefore essential, and so the Generalquartiermeister had a team of officers at his disposal to survey and sketch the terrain. More often and not, these officers lacked the necessary skills to provide their superior with an accurate and intelligible overview of the land, and each Generalquartiermeister thus also had a personal draughtsman. Huber served in this role under Count Quasco, and during the Seven Years’ War he executed several maps before being taken captive by the Prussians in 1760. After two years of imprisonment he was released, and spent the following years continuing to produce pieces of strategic cartography for the Austrian army.

After the conclusion of the Seven Year’s War, the Generalquartiermaiesterstab was established as a peacetime institution, founded in order to survey and describe the imperial territory of Empress Maria Theresa. Huber continued in its employ, producing a manuscript bird’s-eye plan of Prague which, despite the incredibly level of detail and the favour it eventually found with the Empress herself, was never brought to print. Having demonstrated his skill as a cartographer with his description of Prague, Huber was soon charged by Maria Theresa with the task of surveying her capital and primary residence, Vienna.

For the next eight years, Huber worked with a team of surveyors and draughtsmen on what would become the finest plan of Baroque Vienna. The first edition of the ​‘Scenographie oder Geometrisch Perspect. Abbildung der Kayl. Königl. Haupt und Residenz Stadt Wien in Oesterreich’ was eventually printed in 1778 and, despite its unwieldy 24-sheet format and prohibitive cost, went on to become one of the most widespread depictions of Vienna during the late eighteenth century and beyond.

Baroque Vienna
During the sixteenth and seventeenth centuries, the city of Vienna faced a number of attacks from Ottoman forces, including the First and Second Turkish Siege of the city, which occurred in 1529 and 1683, respectively. Following the 1699 Treaty of Karlowitz, which brought an end to the Great Turkish War, extensive building activity and reconstruction took place, transforming Vienna into a truly Baroque city. Architects such as Johann Bernhard Fischer von Erlach and Johann Lukas von Hildebrandt constructed a large number of new estates and palaces for the nobility, including the Palais Liechtenstein, Schonbrunn Palace and te Belvedere. In 1704, an outer fortification was added and two years later the city was surveyed and mapped by Leander Anguissola and Jakob Marinoni.

After an outbreak of the plague in 1713, the population of Vienna began to grow steadily, increasing by a quarter in 50 years. New factories attracted workers from the countryside, and the government was forced to take measures to combat the inevitable issues that arose from this rapid urbanisation. The sewer system was swiftly developed and street cleaning programmes were implemented. In addition, the postal system began to expand and the state issued the first official house numbers. The Konskriptionsnummern system was used to ensure the efficient collection of taxes, facilitate administrative tasks such as the census and the collection of building statistics, and for the conscription of soldiers.

The Plan
Two years before Huber’s commission, the court mathematician Joseph Anton Nagel had been charged with measuring and depicting the urban centre within the city walls. Work did not begin on the project until 1770, but four years later a plan of the inner city of Vienna was executed, although due to financial pressures, it did not go to print until 1780–81. Huber is likely to have had access to Nagel’s work, and indeed to have borrowed several details from the slightly earlier plan. Like Nagel, Huber oriented his map to the southwest, positioned a similar decorative vignette in the same place, the lower right-hand corner, and presented the inner city in great detail, including the Konskriptionsnummern. The addition of these important housing numbers makes both Nagel and Huber’s views important precursors of the cadastral survey that would grow in popularity throughout Europe during the eighteenth and nineteenth centuries, as growing prosperity encouraged homeowners and landowners to have plans and surveys made of their estates.

Huber’s plan, however, goes beyond the schematic representation of Nagel’s, since it also describes the elevation of the land and the height of individual buildings. While the former is represented by hachures, the latter is achieved by the use of isometric perspective, by which the buildings are shown as three-dimensional. This is also known as military perspective or cavalier perspective, so-called because the features appear to be viewed from the elevation of a ​‘cavalier’, a type of raised platform inside a fortification from which soldiers would shoot at an oncoming enemy. This perspective allows Huber not only to represent all of Vienna’s buildings, but also each of its buildings’ facades, levels, doors and windows. Trees, bridges, street-lighting, walls, gardens and boats are also depicted as three-dimensional objects. The isometric perspective employed across the plan makes Huber’s work an important art historical source, as well as a geographical, cartographical and demographic one.

At the centre of the plan is Vienna’s densely packed urban centre, surrounded by the Ringmauer, the star-shaped wall built in 1200 and fortified with regular towers. Just outside of this structure is the Wiener Glacis, the open space that separated Vienna proper from its surburbs. Although it original served the city’s defenders as a field of fire against their attackers, it later became used for civilian purposes, with Emperor Joseph II ordering tree thousand trees to be planted there in 1770. Encompassing the entire city is the Linienwall, erected in 1704 on the orders of Leopold I to protect Vienna against further attacks. During its construction, all residents of the city between the ages of 18 and 60 were forced to take part. Shown on the plan are the eighteen chapels built along the Linienwall between 1740 and 1760, which were intended as places for travellers to stop and pray while entering or leaving the city.

Also featured across the plan are a number of the new Baroque buildings constructed in Vienna during the preceding decades, such as the Karlskirche consecrated in 1737, as well as older structures including St Stephansdom, which towers above the other buildings at the heart of the inner city. The elaborate walled gardens of the nobility’s estates are juxtaposed against neighbouring fields, and it is even possible to spot several pedestrians wandering the city streets. In the upper right-hand corner, the title cartouche is surmounted by the Empress’ coat of arms and the Hapsburg eagle.

The incredible intricacy with which Huber depicts the city and its structures makes his ​‘Scenographie’ one of the most attractive and important visual sources about Baroque Vienna.