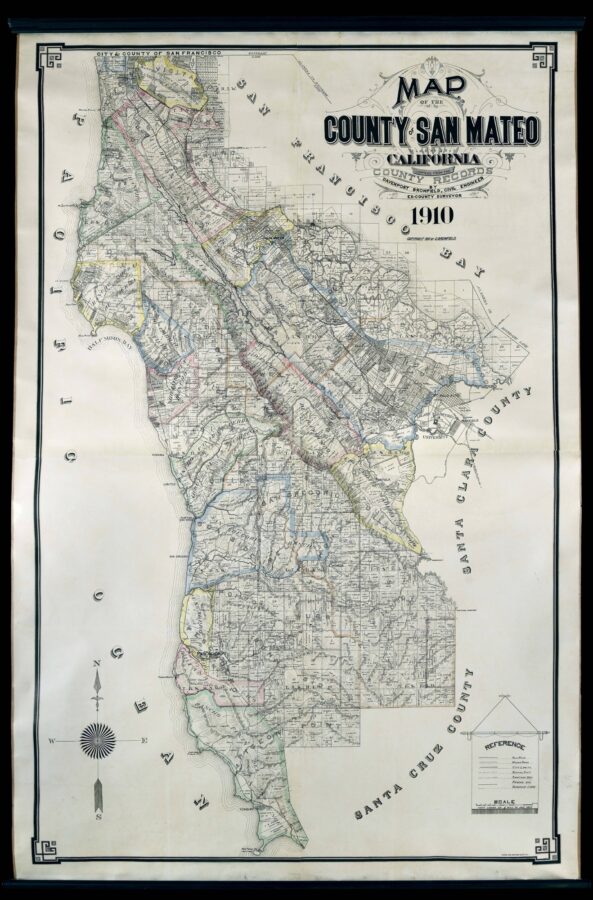 Map of the County of San Mateo California Compiled from the County Record by Davenport Bromfield, Civil Engineer, Ex-County Surveyor, 1910.

Bromfield published his first large-scale map of San Mateo county in 1894, the same year in which the city of San Mateo was incorporated: ​“It was in the year of 1888 that William H. Howard who owned several acres lying between the village of San Mateo and what is now Burlingame Avenue, began an active campaign of subdivision, and employed Davenport Bromfield the civil engineer to lay out what is known as the Western Addition to the City of San Mateo. Mr. Bromfield subsequently laid out practically all of the most important tracts and subdivisions throughout the peninsula, from the southern boundary line of San Francisco to the Menlo Park vicinity” (Alexander and Hamm, ​‘History of San Mateo County’, page 53).

The finished map includes a wealth of geographical information, but also the names of landholders, encompassing the area around Palo Alto, Menlo Park, and Leland Stanford, Junior, University, formerly the site of the Stanford’s horse farm. Begun in 1885 and opened in 1891, the university was ​“arguably the single greatest American philanthropic gift to date. The school, coeducational from the start, offered broad training in the arts and sciences and has since grown in prestige to the first rank of world universities” (William Deverell for ANB), and the current center of the technology-focused institutions that fuel the industry of Silicon Valley.

The ​‘Reference’ table, lower right, includes a key for finding the ​‘RailRoad’, which arrived in 1902, and the ​‘Wagon Road’, but not for the highway. Construction of the first California State Highway, which ran from South San Francisco to Burlinghame, only began in 1912, transforming the county into one of the most popular and fastest growing suburban commuter belts of America. Ranchos, the original Spanish and Mexican land grants, are also named.
Davenport Bromfield (1862–1954) was born in Australia and emigrated to California in or around 1883, and for two years worked as Deputy County Surveyor of San Francisco, then as an engineer for the Southern Pacific Railroad and ultimately as County Surveyor for San Mateo.