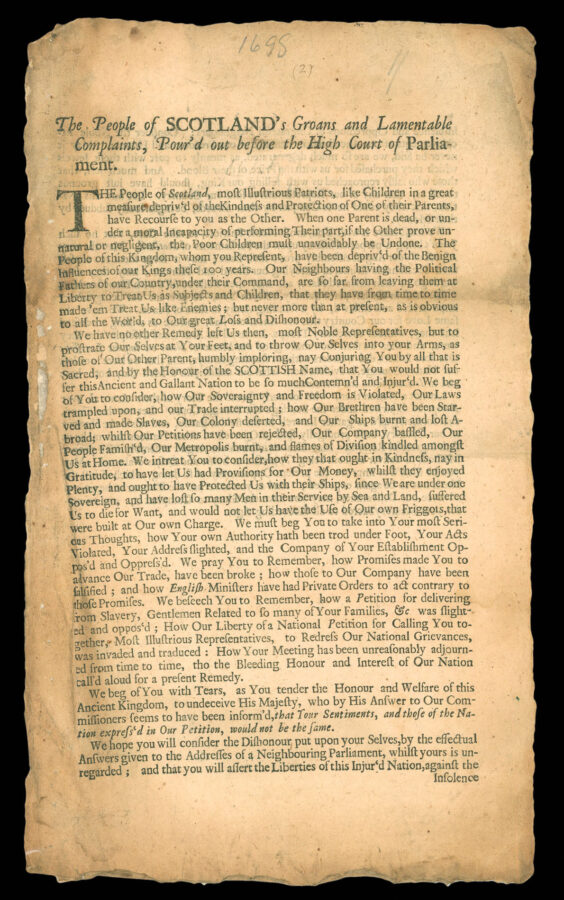 The failure of the Darien Scheme

[Darien Scheme] To the people of Scotland’s groans and lamentable complaints, pour’d out before the High Court of Parliament.

This broadsheet was one of many pessimistic economic tracts written in response to the failure of the Darien Colony, the Scottish attempt to establish a colony on the Isthmus of Panama. The aim of the Scheme had been to provide Scotland with its own colony, and thus boost its economic standing. It had precisely the opposite effect. The scheme was poorly informed, and the initial colonists clashed with Spanish settlers. Keen to avoid confrontation with Spain, the English Parliament and William III refused to intervene. It eventually failed completely, and as it was backed by up to half of the money then in circulation in Scotland, it took the economy of the Lowlands with it.

This pamphlet is aimed at the perceived injustice of the actions of William III. Many Scots felt that the King had injured the venture by refusing to back it publicly: a petition signed by 20,000 people was sent to William in March 1700 asking him to do so, and a further petition from five shires and three burghs was presented to Parliament in May, demanding recognition of the colony (Carruthers and McIlvanney). The writer, George Ridpath, compares Scotland’s relationship with the monarchy and government in London to a family. The actions of the king, he writes, have left Scotland like a child ​“depriv’d of the kindness and protection of one of their parents”, and he appeals to parliament to redress this wrong. The text is strongly nationalist, appealing to Scottish pride: ​“Let not this nation, that they could never conquer by their swords, be ingloriously subdued by their money”. Ridpath argues against English political interference and against the continuation of the union, dismissing Scottish ministers as being under English control, not caring ​“how our sovereignty and freedom is violated, our laws trampled upon, and our trade interrupted”.

These sentiments were politically sensitive: describing the Scots as ​“dispirited under the bondage of a foreign court” had dangerous overtones of resentment against William, a Dutch prince. The publisher, James Watson, was the King’s publisher in Edinburgh, appointed by James VII. He was summoned before the the Privy Council for publishing the pamphlet in 1700, arguing successfully that he should not be prosecuted because he had done it to feed his large family. He would be before the council again five years later for a similarly provocative publication.

There are copies held in the Leighton Library, the National Library of Scotland, the Sutro Library, the John Carter Library, and the University of Indiana. 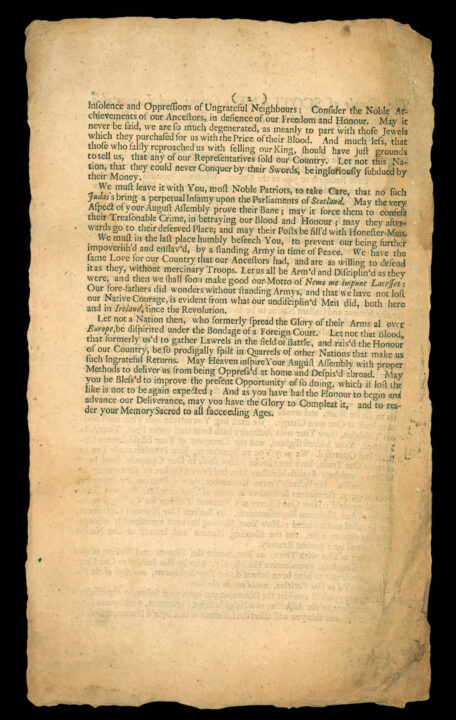