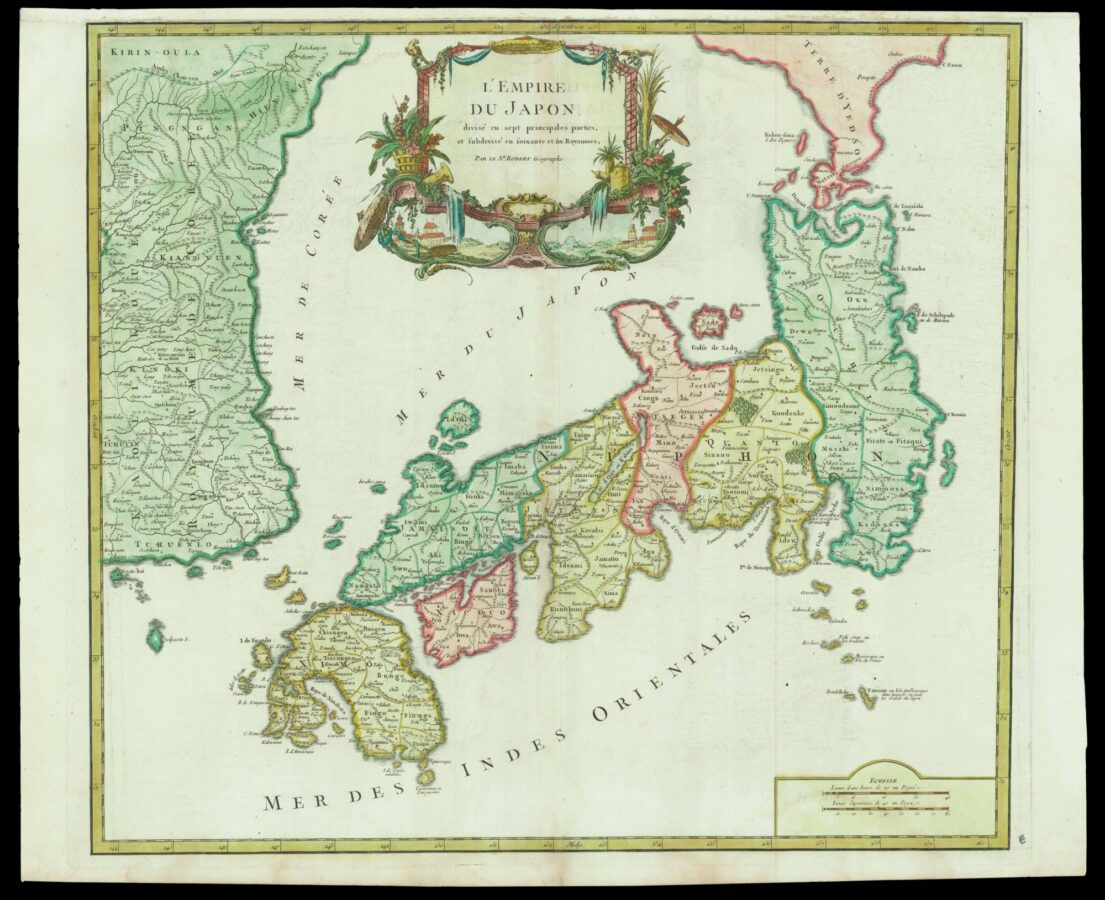 The Empire of Japan

Third issue of the map, included in the ​‘Atlas Universel’, as published by Charles Francois Delamarche, who had bought the copperplates from Antoine Boudet in 1787. In this example, the date ​‘1750’ has been erased from the imprint in the cartouche, and Gilee Robert de Vaugondy’s status reduced to ​‘Geographe’ from Geographe du Roi.

The ​‘Atlas ​‘Universel’ was originally a collection of 108 maps by Gilles (the father) and Didier (his son) Robert de Vaugondy, but published by Antoine Boudet in large and small paper editions. Delamarche increased the total number of maps in the atlas, which he published throughout the 1790s.

Boudet had first collaborated with the Robert de Vaugondys when in 1751 he had published Didier’s ​‘Usages des Globes celestes et terrestes faits par ordre du roi’, for which he was created ​‘geographe du roi’. Pedley describes Boudet as ​“enterprising and somewhat unscrupulous”, and the publication of the ​‘Atlas Universel’ was prolonged and controversial, explaining the disparity between the date engraved on the map of Japan, and its date of publication in the atlas. Boudet came under criticism for being involved in the publication of maps, since he was a bookseller not a geographer; for the quality of the first 17 maps, which were full of errors, and deemed unoriginal; and for not paying his engravers, Jean-Henri Delahaye, his wife, his sister-in-law, and their extended workshop for their work. The maps were eventually approved by Cassini. The map of Japan was not one of those considered to be inaccurate, and was taken from Bellin’s map of 1735, with the exception of the northernmost part of Honshu, where the Robert de Vaugondys have borrowed from D’Anville’s 1732 depiction of the strait of Tsugaru and the general shape of southern Hokkaido in his ​‘Carte Generale de la Tartarie Chinoise’ The depiction of Korea also follows the D’Anville map.

As Pedley reports, the ​‘Atlas Universel’ was the first atlas ever sold in France by subscription. It also included an introduction by Didier, ​‘Essai sur l’Historie de Geographie’, a history of geographic thought and cartographic activity from antiquity to the eighteenth century, which had already appeared in book form in 1755. For this atlas, the essay also included an analytical description of their map sources, and a list of subscribers.