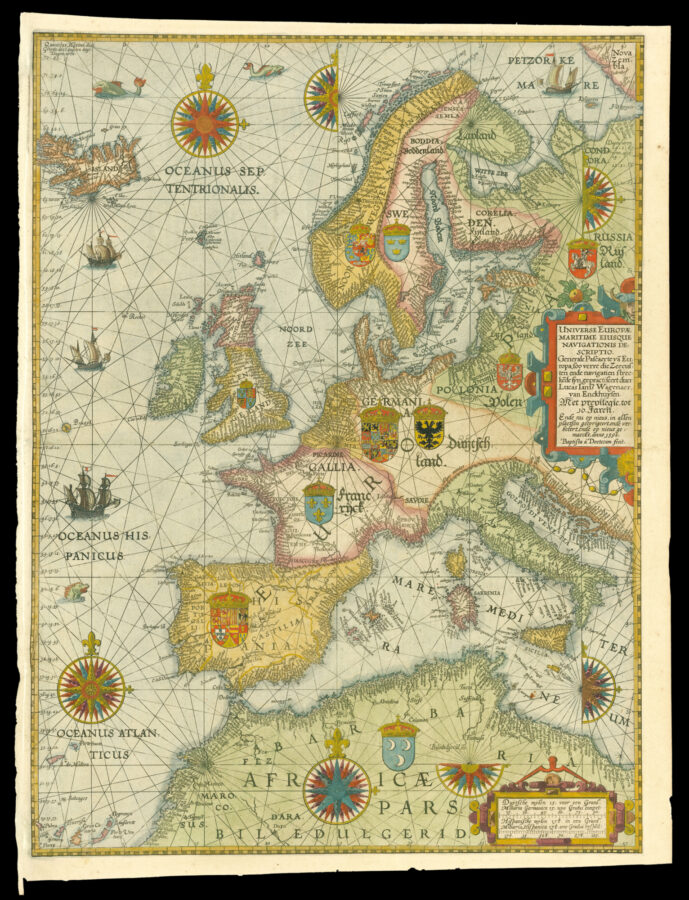 Striking example of the second state of Waghenaer’s general Sea Chart of Europe, first published by Waghenaer in 1583.

Waghenaer’s chart is generally considered to be the earliest obtainable printed sea chart of Europe. The chart covers most Europe, the British Isles, Iceland, the western Mediterranean, and much of North Africa and the Western Atlantic, including the mythical Island of Brazil.

The chart is richly embellished with compass roeses, sea monsters, sailing ships, coats of arms and rhumb lines. The map appeared in Waghenaer’s Speigel der Zeevaerdt. The first edition can be distinguished from the second edition by the inclusion of the curious circular representation of Iceland, which was revised in the second edition to a more recognizable shape.

Waghenaer’s Spiegel was the first engraved sea atlas, making this seach chart of Europe and the Western Atlantic the earliest printed sea chart of the region. The engraving work of Joannes Doetecum is very much in evidence. Because this map was significantly larger than the other maps in the atlas, it rarely appears on the market in good condition. The present example is an unusually nice example, with narrow upper and lower margins (but no loss of neatline, as is often the case), and good side margins. Latin text on the verso. A fine example of this highly important map.