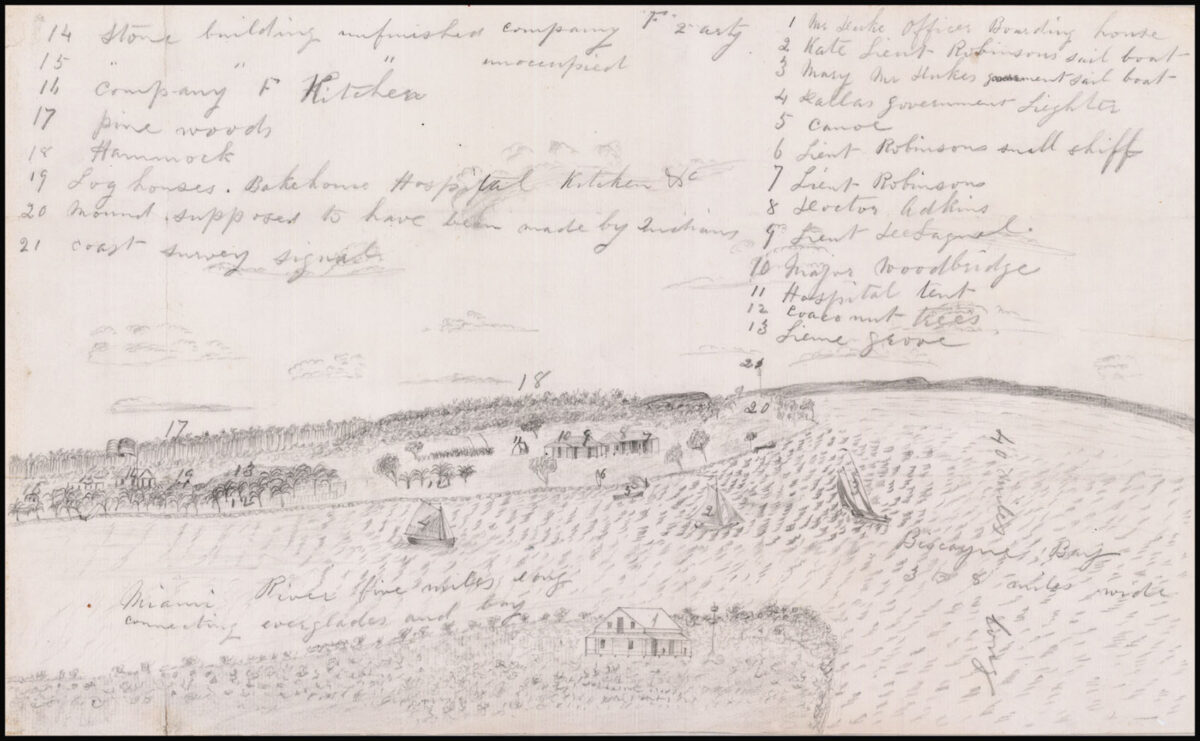 The earliest known view of any portion of Miami Florida

Untitled view of Fort Dallas, at the outlet of the Miami River into Biscayne Bay

The earliest known view of Fort Dallas at the mouth of the Miami River, and as such, the earliest view of any portion of Miami, Florida, also of the earliest known surviving structure in Miami: initially slave quarters, then the Julia Tuttle Mansion, now relocated to Lummus Park.

The map shows both the north and south banks of the Miami River, which is noted as being ​‘five miles long’, at the point where the river empties into Biscayne Bay, which is ​‘3 to 8 miles wide, 40 miles long’. Fort Dallas appears on the north bank, as a cluster of small unfortified buildings. Each is identified by number in the legend on the upper half of the sheet. The living quarters of the officers stationed at the fort from 1849 to 1850 are shown: Major Woodbridge, Dr Adkins, Lieut Robinson, and Lieut. De Sagnol. They were in charge of a garrison of 51 soldiers, so naturally the view also names the Hospital Tent, the Company F Kitchen, Log House, Bake House, a ​‘stone building unfinished company F 2 art[illery]’, and ​‘Stone building unfinished unoccupied’. These last two are clearly the stone structures begun by William English and completed by the army in the 1840s and 1850s.

On the south bank of the Miami river is ​‘Mr. Duke’s Officer Boarding House’. Reason Duke was keeper of the lighthouse at Key Biscayne. The artist shows boats in the river, identified as ​‘Kate — Lieut. Robinson’s sail boat’, ​‘Mary — Mr Duke’s government sail boat’, ​‘Lieut. Robinson’s small skiff’, ​‘Dallas government Lighter’ and a ​‘Canoe’. Elements of earlier native occupation are noted as ​‘Mound supposed to have been made by Indians’, as are elements of natural topography and vegetation.

Fort Dallas was named after Commodore Alexander James Dallas of the U.S. Navy. Dallas had had a distinguished carrier in the navy. His most famous exploits came during his time as head of the West India Squadron, in the 1820s, when he fought piracy and slavers in the Caribbean.

Built on private land purchased in the early 1830s by Richard Fitzpatrick. During the Second Seminole War of 1836, the fort consisted of tents and other temporary structures, and was occupied periodically by the Army between 1836 and 1838, and then consistently from October 1839 to January 1842.

By 1843, with the war over, and Fitzpatrick’s plantation in ruins, he sold the land to his nephew William English, who erected more permanent buildings on the site, including stone foundations for a mansion house and slave quarters. Importantly, in 1844, he laid out the village of Miami along the river, and was able to sell a small number of lots, before hightailing it to California and the Gold Rush of 1849. Rather tragically, he died there of a self-inflicted gunshot wound.

During the hiatus between the Second and Third Seminole Wars, in October of 1849, Fort Dallas was again occupied, this time by Company F of the 2nd Artillery Regiment, for a period of about 15 months. In 1855 the fort was occupied long enough for the stone structures to be completed, and the fort expanded. However, by the Civil War, the fort was abandoned and nothing much left of it by the 1870s. In 1891, Julia Tuttle, the founder of the City of Miami, purchased the site, and converted the slave quarters into a mansion. In the 1920s the building was transported, stone by stone, to Lummus Park, where it is today, acclaimed as the oldest extant structure in Miami.

Though Florida’s southeast coast had been explored in the eighteenth century, Miami appears late in the cartographic record. A 1743 manuscript of South Florida by Father Joseph Xavier Alana, indicates a short-lived Spanish Mission (‘Santa Maria de Loreto’) on the north bank of the Miami River, but the first ap to use the name ​‘Miami’ in the immediate area was Disturnell’s 1847 ​‘Mapa de los Estados Unidos de Mejico’. Efforts to locate plates related to William English’s subdivision of the village of Miami in the mid-1840s, have been unsuccessful. The earliest known large-scale maps of the Miami area seem to be the two maps drafted by a member of the Coast Survey in early 1840, being a small plan of ​‘The mouth of the Miama [sic] River, entering into Kay Biscaine Bay’, and a small ​‘Topographical Sketch of the Miami River’.

The anonymous cartographer is probably Second Lieutenant James M. Robinson of New Hampshire, who served in Company F of the 2nd U.S. Artillery Regiment. Robinson is credited with the construction of the two barracks built between 1849 and 1850, and as a source for the Coast Survey maps of 1850 and 1852, by Frederick H. Gerdes (1809–1884), who surveyed the Biscayne Bay area and the Miami River.

Archive of the Pearson family of New Hampshire.