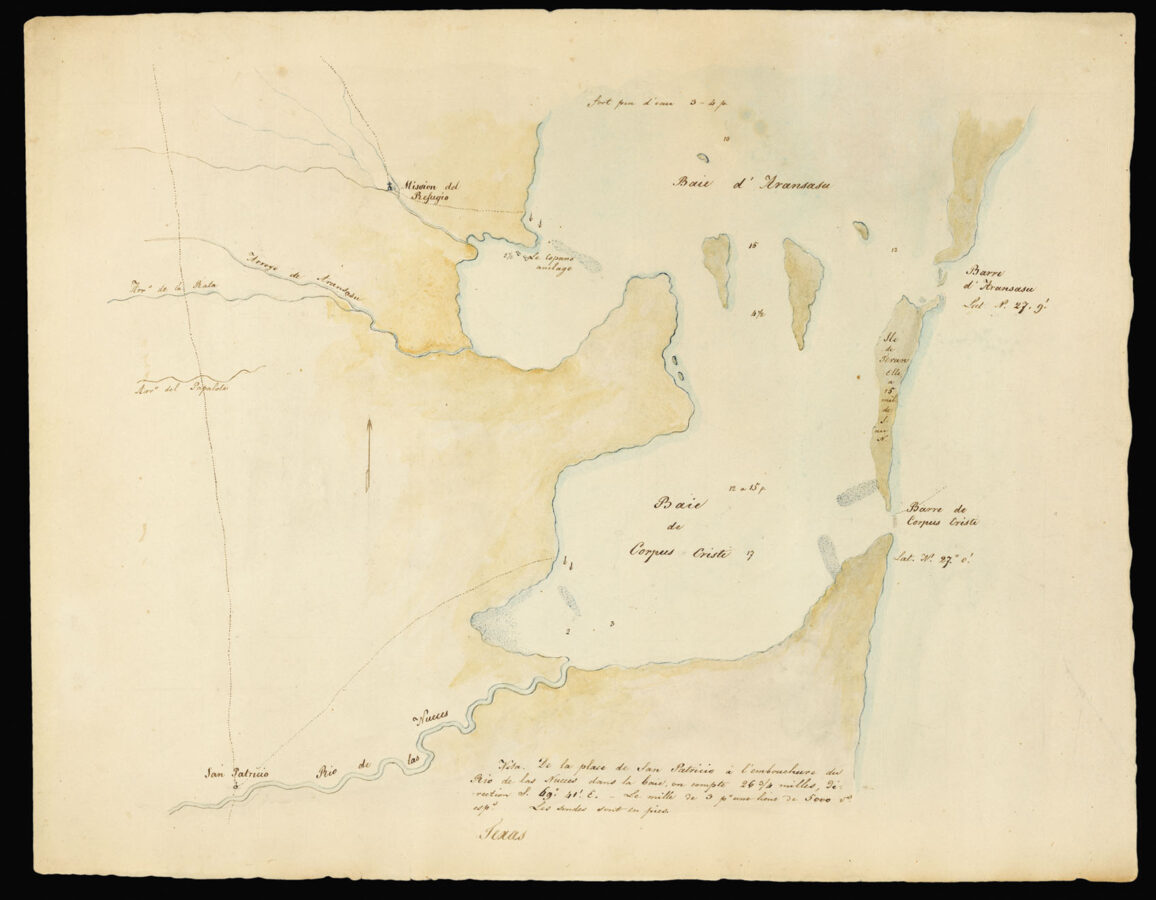 The earliest identified view of any Texan town, and a detailed map of the site of Houston prior to its foundation.

These important manuscript maps are the work of Jean Louis Berlandier (circa 1805–1851), anthropologist, geographer, historian, meteorologist and naturalist, one of the first scientists to explore northeastern Mexico and southeastern Texas. Between 1828 and 1834 Berlandier compiled the first extensive collection of material on the flora and fauna of Texas, its meteorology, ethnography and topography. He ​“was observant, careful, and intelligent, and left us a record that is unmatched for his era in Texas” (J. H. Jenkins, Basic Texas Books, 14).

A native of France, Berlandier studied under the Swiss botanist Augustin Pyramus de Candolle at the Academy of Geneva. In November 1826, Berlandier was assigned by de Candolle to collect natural history specimens in the northeastern part of Mexico, including Texas. After arriving in Mexico, he was appointed botanist for the Comisión de Límites. led by the former Minister of War, General Manuel de Mier y Terán, and financed by the Mexican government. The Comisión was set up to make a scientific survey of the borderlands with the United States west of the Sabine River. It reached San Antonio in March 1828. For the next year and a half Berlandier travelled throughout south and east Texas studying the region’s natural history, collecting specimens and making astronomical observations.

Berlandier also compiled maps of various parts of Texas, but most of these were small sketch or route maps included in octavo field books. Very few were of the size and quality of the four maps offered here. The presence of the words ​“Comisión de Límites” in the lower margin of three of our maps indicates that they were official documents, to be used by the commission.

On the disbandment of the Comisión in November 1829, Berlandier settled permanently on the south bank of the Rio Grande, at Matamoros, where he found employment as a physician and pharmacist. He continued to keep diaries, collect specimens and artifacts, and make botanical, ethnographic and topographical drawings until 1834. In 1851 Berlandier drowned while crossing a river south of Matamoros.

Berlandier’s Diario de viage de la Comisión de Límites… was published in Mexico City in 1850. Jenkins calls this work ​“the best scientific study of Texas during the colonial period.” An English translation by Shiela M. Ohlendorf was published as Journey to Mexico during the Years 1826–1834. (Austin: Texas State Historical Association,1980).

In 1853 Berlandier’s collection was purchased from his widow by Lt. Darious N. Couch, who sold the bulk of it to the London firm of Bernard Quaritch. The collector, Sir Thomas Phillipps acquired the Berlandier papers from Quaritch and they were later sold and dispersed at the Phillipps Sales in 1913 and 1919.

In the winter of 1829, Terån ordered Berlandier to take the botanical specimens he had collected to New Orleans, from where he could safely ship them to Mexico. Berlandier arrived at Copano in March 1829 [see Map 4], where he boarded the American vessel the Paumone, commanded by Captain Prieto, for the voyage to New Orleans. It must have been during this voyage that Berlandier made this copy of Prieto’s map.

The Berlandier Papers at the Beinecke Library, Yale University, includes a pencil and ink sketch map of Galveston and Matagorda Bays that appears to be the model for this finished manuscript. The Beinecke sketch-map may be Prieto’s original. The subsidiary title, ​“Comisión de Límits,” in the lower margin of the finished manuscript indicates that it was prepared as an official document for the commission.

This is a very early separate map for Galveston Bay and its tributaries, which include the San Jacinto River and Buffalo Bayou. It therefore contains a closeup look at the site of Houston approximately seven years before the city was founded in March 1836. In all the courses of a total of fifteen named rivers are shown flowing into Galveston and Matagorda Bays. Numerous depth soundings are given for Galveston Bay, and a large bar is shown separating the upper and lower parts. Bolivar Point is named and Galveston Island still has its ancient name, ​“Isle San Luis.” Like Houston, Galvestion (founded 1836) is still missing. Pelican Island is identified, and there seems to be a large island in the channel running from the gulf into Galveston Bay that no longer exists (“Isla Grande”).

A highly important manuscript map, with the earliest-known view of a Texas town in an inset.

The port of Brazos Santiago lay at the northern tip of Brazos Island and is clearly marked on the chart. Of the greatest interest is the fine inset view of the town at lower center. It is the earliest-known view of any Texas town. Its origins seem to be lost in the mists of time. But, as the port for Matamoros and the Rio Grande Valley, it was the most important town on the Texas coast prior to the founding of Galveston in 1836. The vestiges of the town were swept away by a hurricane in 1867.

The margins are filled with a lengthy text that gives a great deal of information on Brazos Santiago. In the left margin is a brief description of the port and its trade, described as dominated by the English and ​“Norte Americanos”. This text also includes the words ​“este año (1829),” which allows us to assign a date to the chart. The text in the right margin includes astronomical coordinates for the position of Brazos Santiago.

The use of the Spanish language, and the words ​“Comisión de Límits,” in the lower margin, indicate that this finished manuscript chart was prepared as an official document for the commission.

This is probably the most important and detailed map of the lower Rio Grande Valley made prior to the Mexican War of 1846–48. It incorporates the area shown on map 2, and is designed to show the overland routes by which trade moved from the port of Brazos Santiago to Matamoros. Numerous place names appear on the river below Matamoros, and in the oversized left margin is an extensive text that describes the country.

The latitude for the mouth of the Rio Grande and Brazos Santiago are given, and both latitude and longitude for the position of Matamoros. Two small unnamed settlements lost to history are shown on either side of ​“Boca Chica,” the channel that separates the south end of Brazos Island and the opposite mainland shore. Lacking anchorages, they probably came into being as transfer points for goods travelling between the island and Matamoros.

The place names are in at least two different inks, and appear to be in two or three different hands. The map was evidently worked on over a period of time.

A chart of Corpus Christi and lower Copano and Aransas Bays, with some depth soundings, and including the future site of the city of Corpus Christi. The lower courses of a number of creeks and rivers are laid down, and three important early Texas settlements are identified: Copano, the Refugio Mission, and San Patricio.

The port of Copano, here called ​“Le Copano anelage [or anchorage],” was founded in 1785. Juan Almonte identified it in 1834 as the deepest and safest port on the Texas coast, but it never amounted to much more than a custom house and was abandoned in 1880. A road leads from Copano to the old Refugio Mission, a short distance inland. Founded in 1793, the mission was abandoned in 1830.

The new settlement of San Patricio, founded in 1830 by Irish immigrants from New York, is located at the point where the Camino Real (Royal Road) crosses the Nueces River. An anchorage for San Patricio is identified by two anchors on Corpus Christi Bay, with a road leading to the settlement. A note in French at the lower centre gives the coordinates for the anchorage.

Berlandier spent time at Copano in the spring of 1829, making astronomical observations and investigating the country [see Map 1]. The presence of San Patricio, and the absence of the words ​“Comisión de Límites.” indicate that this manuscript was prepared after commission was disbanded in November 1829

Berlandier’s papers can be found in the following American institutions:

1. Yale University. The Beinecke Library, WA MSS S‑300–325, 328–331; (uncatalogued WA MS 56, 178). Provenance: Darius Nash Couch, sold to the English firm of Bernard Quaritch and then to the collector Sir Thomas Phillipps. Sold to Karl Hiersemann of Leipizig at the Philipps auctions in 1913 and 1919. Purchased by Henry R. Wagner who sold the collection to Yale in 1919.

Yale has the only extensive collection of Berlandier’s cartographic work. The bulk of them (approximately 85%) are of Mexico. The other 15% mostly relate to Texas, with the vast majority being small pencil sketches or route maps found in octavo field books or journals. Of the remainder, no more than two or three compare in quality and finish to the present four Berlandier manuscripts. Of particular interest is what appears to be a preliminary field sketch of the finished manuscript map of Galveston and Matagorda Bays. Also present is a plan that Ron Tyler, former Director of the Amon Carter Museum and Head of the Texas state Historical Association, identifies as the earliest-known of the Alamo.

3. Harvard University. Library of the Gray Herbarium. Darius Nash Couch sold to C. W. Short, 1853. The collection is botanical in nature, consisting of botanical specimens and drawings, and several journals (all after 1830.) There is no mention of any maps. http://www.huh.harvard.edu/libraries/archives/BERLANDIER.html 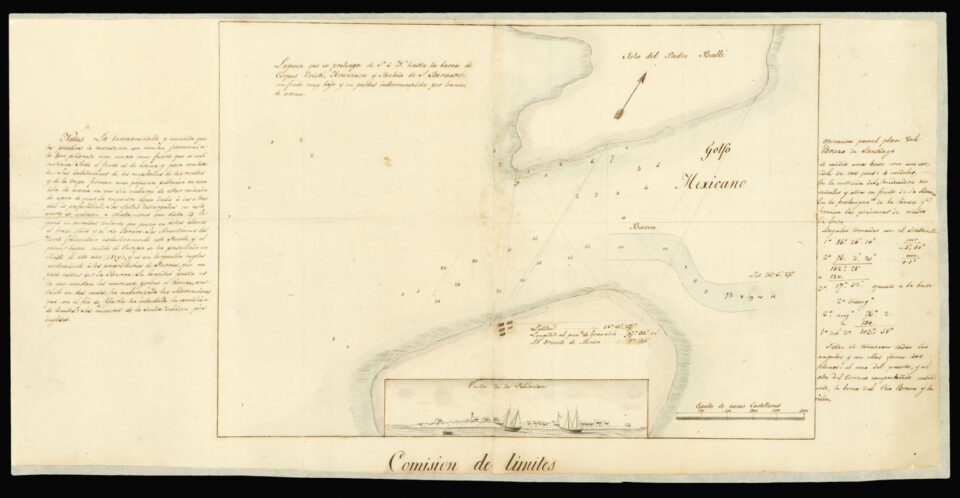 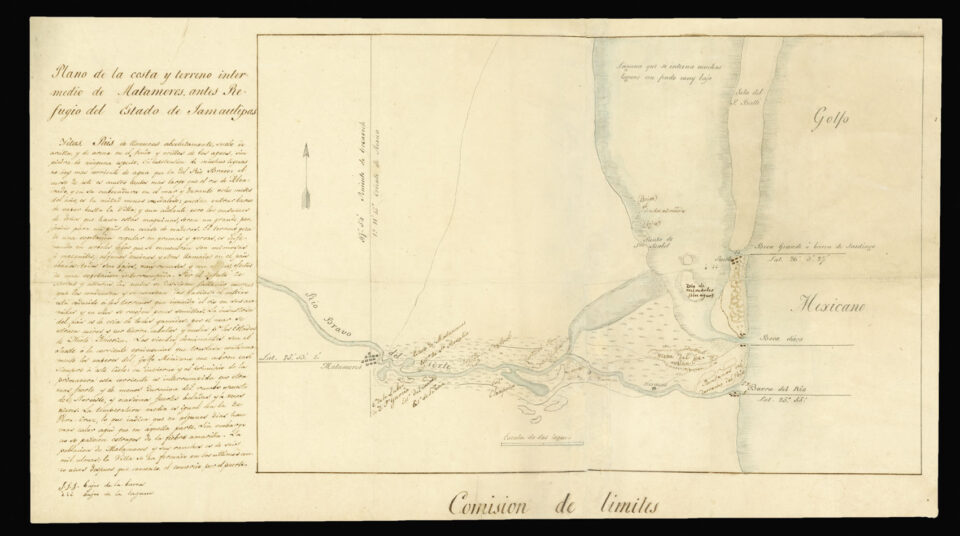 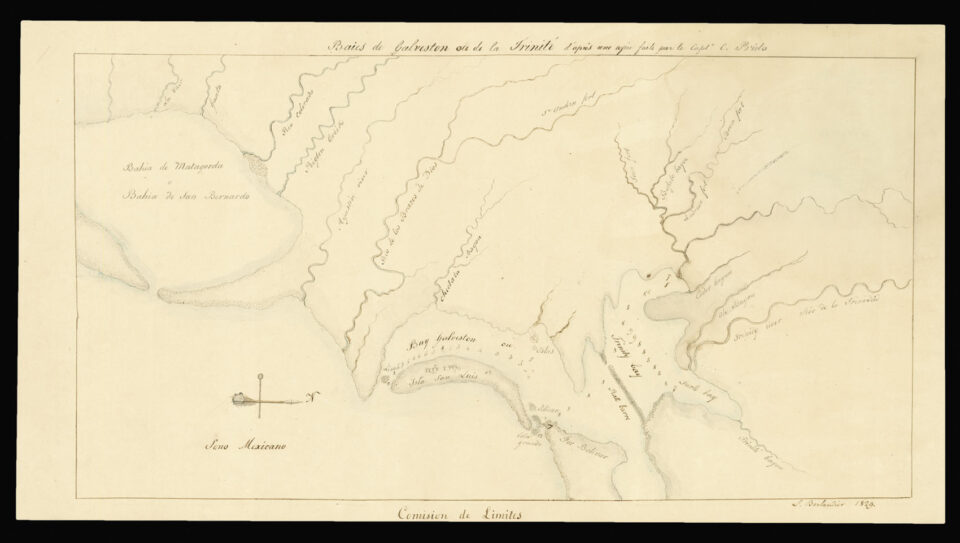