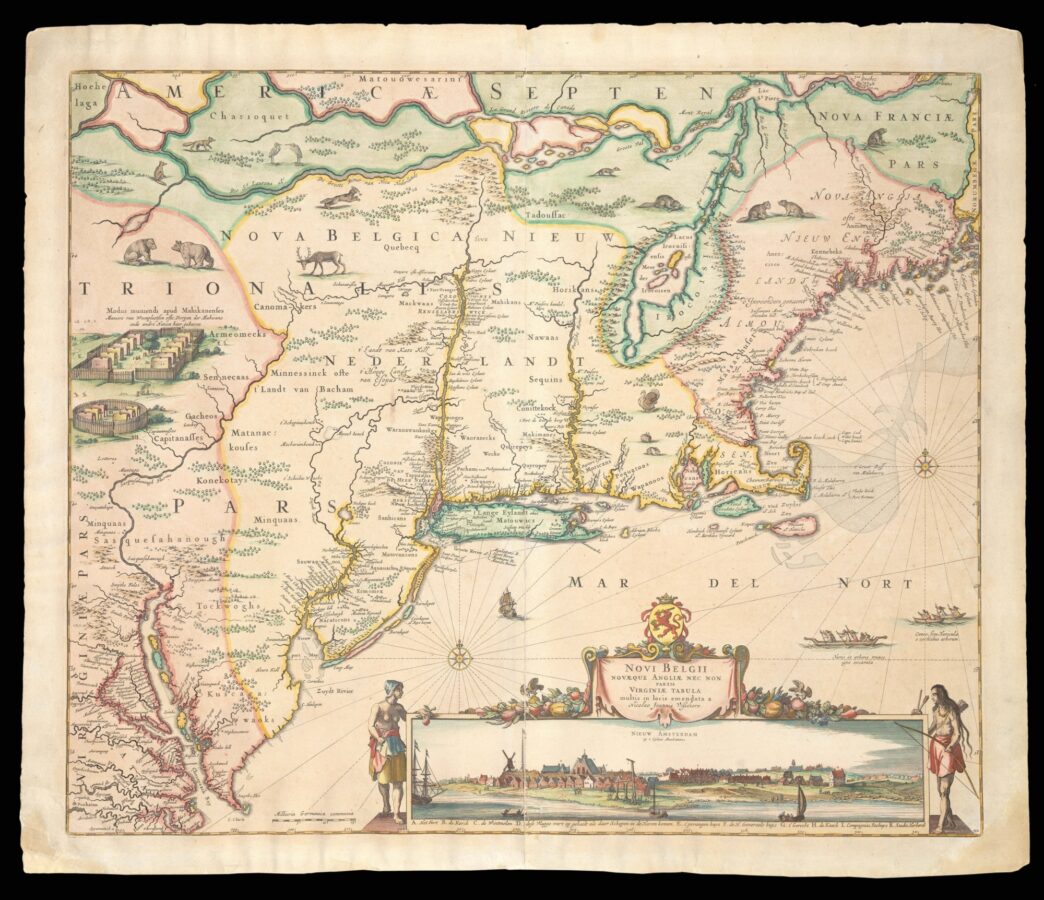 The Dutch and English colonies in Northeast America, with an iconic view of ​‘New Amsterdam’

An extremely rare example of the second state of New York with original colour.

In 1621, the Dutch West India Company set about a systematic attempt to colonise the north eastern region of what is now the United States, aiming to win themselves a monopoly over the North American fur trade. Over the subsequent decades, the Dutch Republic came to occupy a large territory extending from the Delmarva Peninsula to Cape Cod. A number of major cities were established in this colony, New Netherland, throughout the mid-seventeenth century, including New Amsterdam, now New York.

It was in 1624 when New Netherland formally became a province of the Dutch Republic, and it is the borders established in this year that are outlined on the present map. In 1648, Adriaen van der Donck, a Dutch settler, lawyer and writer who documented a wealth of information about the American territory, produced a manuscript map which he presented to the Republic’s confederal government in 1649. In 1651, van der Donck’s map was engraved by Jan Jansson, extending from the St. Lawrence River to Chesapeake Bay, and from the Susquehanna River to the Penobscot, incorporating most of New England, New York, Pennsylvania, New Jersey, Virginia, Maryland and Delaware.

The map presents an attractive picture of vast unsettled Dutch lands teeming with game, as various American animals are illustrated across the land. Woodlands and forested areas, as well as mountains, are also represented pictorially, and in the upper-left hand corner are ideailsed illustrations of the Native camps.

This mapping of Northeastern America continued to dominate the cartography of the region for the following century, with Nicolas Johannes Visscher publishing his first state of the map in c1655. Visscher included a view of Manhattan along the lower edge, beneath the map’s title. The authorship of the view is not known. Some have claimed that it was drawn by the cartographer Augustine Herrman, although Stokes refutes this. Based on the identification of certain structures in the view, Stokes suggests a probable date for the original drawing of between 1652 and 1653. It is one of the earliest views of what would later become perhaps the world’s most iconic city skyline.

The present example of the Jansson/​Visscher map of New Netherland is extremely rare, as the map was not included in any Visscher atlases until c1684. Furthermore, its original hand-colour is even more unique, and overall, we have been able to trace only ten examples of this rare second state in institutions worldwide.