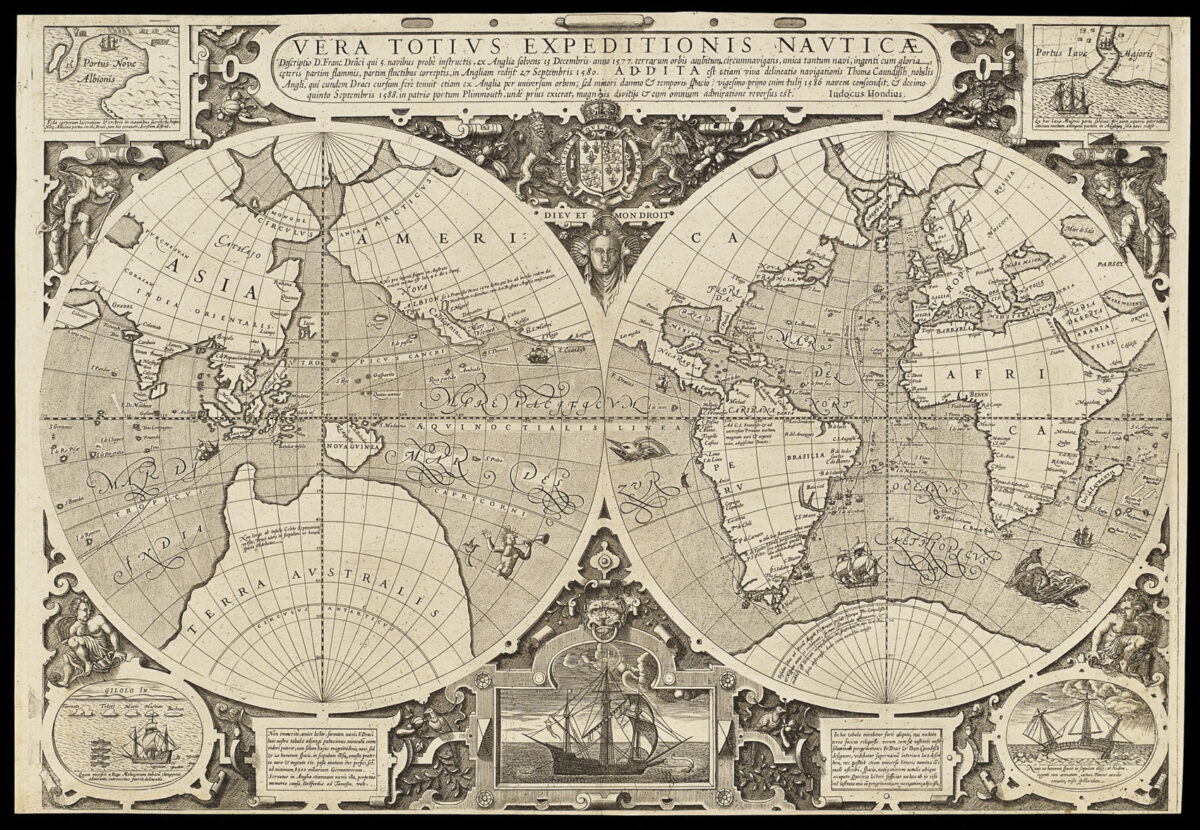 Rare separately issued world map depicting the voyages of Drake and Cavendish, by one of the greatest map engravers of his day.

This rare broadsheet map is a homage to Francis Drake and Thomas Cavendish — the first Englishmen (and only the second and fourth men) to circumnavigate the globe. The Latin text below the title gives a brief description of both men’s voyages: Drake left England on the 13th December 1577 with five ​“well equipped ships”, returning on the 27th of September 1580 ​“with great glory but with one ship only the others destroyed by fire and storms at sea”; Thomas Cavendish, who fared rather better, ​“took the same course round the world but with less loss and in a shorter time”, leaving on the 21st July 1586 and returning on the 15th September 1588. ​“He acquired great riches and the admiration of all his countrymen”.

The voyages were of huge significance at the time, as they directly challenged Spain’s hegemony of the New World, at the same time that England was confronting her power over Europe. The map highlights the voyages’ importance by stripping much of the descriptive text from the land, leaving only the information pertaining to the expeditions. The map also takes the uncommon step of splitting North America between its eastern and western hemispheres. Although unusual, it does have the effect of highlighting the voyages’ ports of call in South America, the western coast of North America and the Spice Islands. The map’s cartographic importance lies in its depiction of the great Southern Continent, with Tierra del Fuego clearly distinct from Terra Australis. Shilder states that, ​“Hondius was the first to see the true implication of Drake’s voyage”.

Below the title is the royal coat-of-arms of Elizabeth I, with a vignette of the Golden Hind, Drake’s flag ship, below. The text to the left of the vignette states that the ship now resides at Dartford. To the corners are four further illustrations of the ship: Drake’s landing at ​“Nova Albion” in California where he was crowned king by the natives, upper left; sailing round the southern coast of Java — the first person to do so — upper right; Drake’s welcome by the King of the Moluccas, lower left; and the Hind cast upon rocks near the Celebes. Although, as Fite and Freeman point out these ​“are probably the only [contemporary] representations of the famous ship in existence”, today one is rather spoilt for choice as there are not one but two full size replicas of the Hind, one upon the Thames, and the other at Brixham in Devon.

The map was the work of Jodicus Hondius (1563–1612) one of the leading Dutch cartographers and engravers of his day. Between approximately 1584 to 1593 he lived and worked in London. Whilst there, he took a particular interest in Drake’s voyages and the man himself, with several engravings of the explorer attributed to him. Hondius’s residence in London also bears witness to the close ties between the English and the Dutch at the time. Both were young seafaring nations who were keen to wrench the riches of the New World and the Spices of the Moluccas from the grasp of the Iberian powers.

The exact dating of the map is uncertain. It is highly unlikely to have been published earlier than 1589 — a year after Cavendish returned. Some have stated that it was produced sometime in the early 1590s, whilst Hondius was still in London. Shirley counters that the map is too highly finished to be attributed such a date; this, together with the fact that some copies are mounted as broadsides with Dutch text, makes a date of post 1594 — when Hondius had returned to Amsterdam — more appropriate. One might equally argue that both theories are true. As Hondius must have owned the copper plate, publication in both London and Amsterdam is most probable.

Extremely rare. Shirley states there are some seven or eight known examples of the map. He gives the location of four of these: two in the Royal Geographic Society; one in the British Library; and one in the Maritime Museum Rotterdam. Of the other three or four he states that they are in American and Parisian collections. The OCLC records several in the American institutions, however, the majority seem to be facsimiles. The exceptions would seem to be the Library of Congress, and the University of Texas.