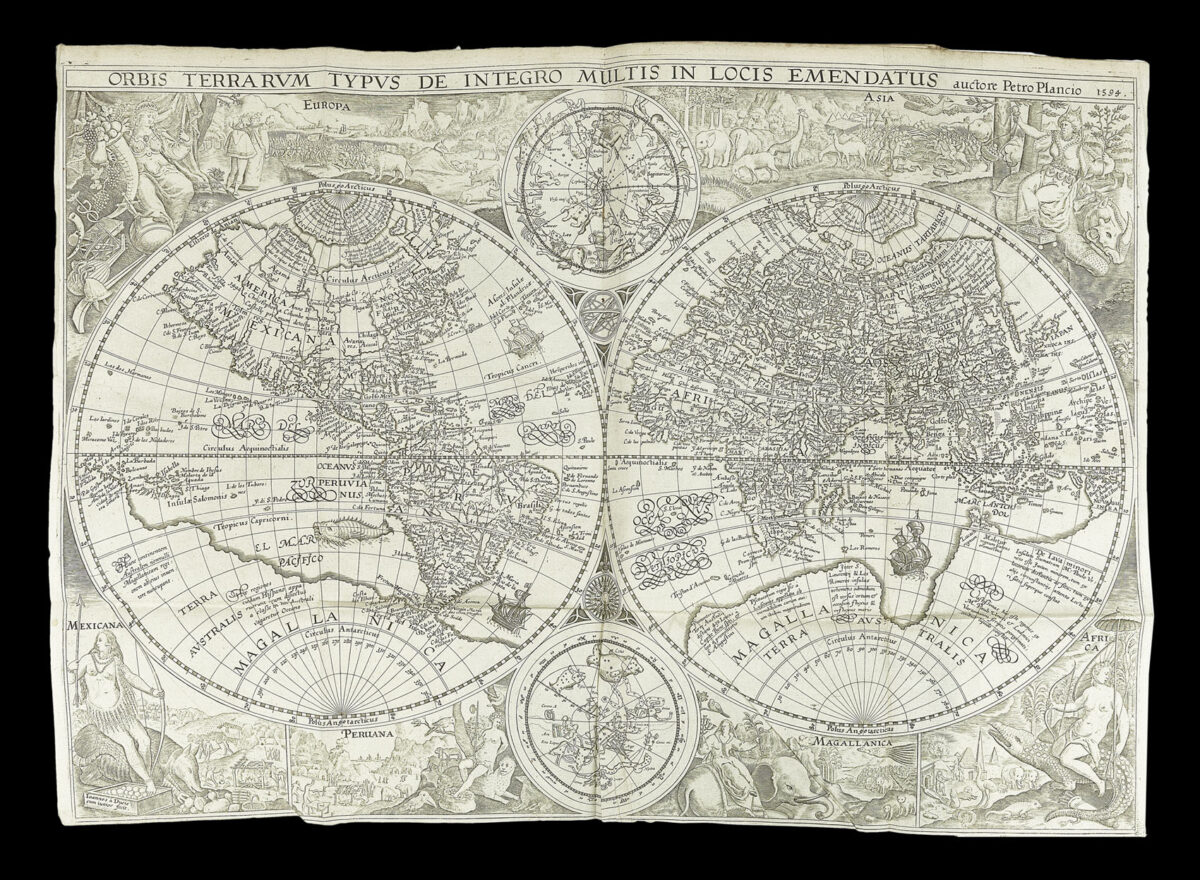 A double hemispheric world map. The spandrels are filled with four female personifications of the four known continents; America represented by three separate figures: Mexicana (presumably Central America), Peruana (South America) and Magallanica (an early name for North America). The women are accompanied by native animals. The American section shows the recently discovered animals of the New World: an armadillo, toucan, monkey and parrot. Although marked as both America and Mexicana on the map itself, the personification of North America is called Mexicana and South America appears as Peruana. The woman to the lower left riding an elephant, Magallanica, represents the mythical southern continent terra Australis, also called Magallanica. Magallanica was thought to be a tropical continent, hence the elephant and bird of paradise accompanying the woman; the map illustrates the contemporary belief that it joined with the archipelago Tierra del Fuego at the bottom of South America and spread over the southern pole. Although the Strait of Magellan, the passage between the Atlantic and Pacific Oceans, had been discovered in 1520, it was not until much later that navigators knew that the islands in Tierra del Fuego were not part of Terra Australis.

The first book is especially valuable for its eyewitness account of India, as one of the few Renaissance works on the East to be illustrated from life. Linschoten’s description of Goa is ​“one of the most original and reliable narratives prepared during the sixteenth century on life at the hub of Portugal’s Eastern empire and still is regarded as one of the best sources for Goa’s history at the peak of its glory”. The maps in the first book of the ​‘Itinerario’ were engraved by Henricus van Langren, mainly using Portuguese maps owned by Cornelis Claesz, the original publisher of the ​‘Itinerario’. They were mostly drawn by de Lasso, and originally acquired by the Houtman brothers between 1592–93, during their secret mission to Portugal at the suggestion of Petrus Plancius, the first official hydrographer of the VOC.