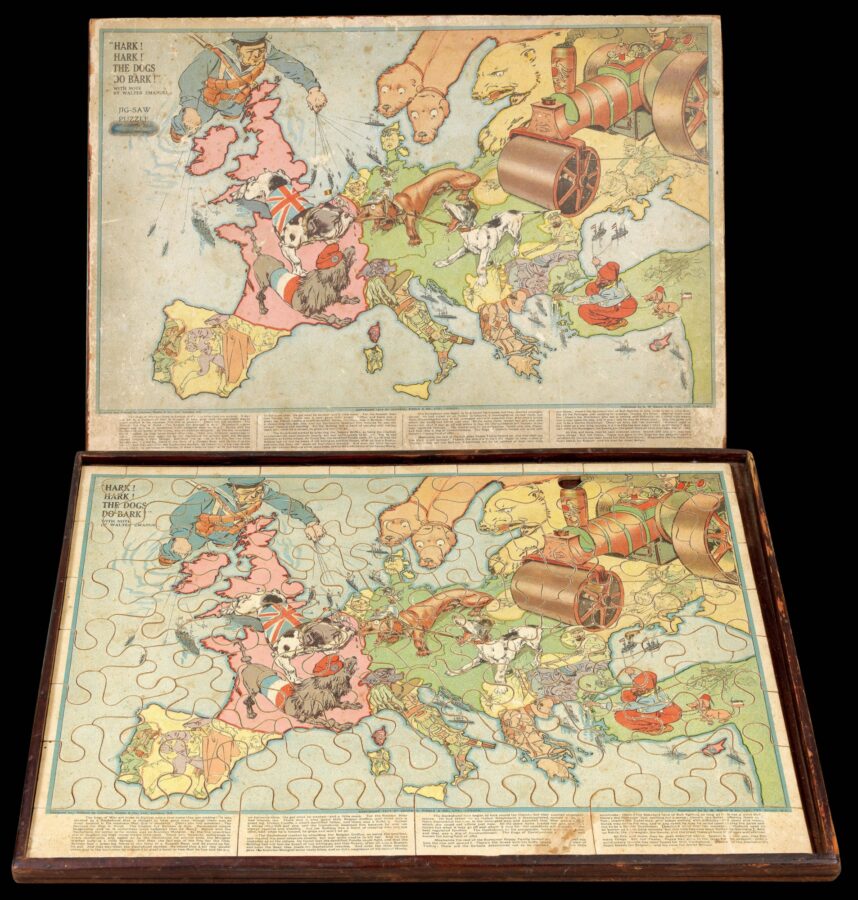 “The Dogs of War are loose in Europe”

“Hark! Hark! the Dogs do Bark.” with note by Walter Emanuel.

An humorous serio-comic map of Europe in jigsaw form, showing a satirical depiction of the beginning of the First World War.

The principal combatants are portrayed in canine form: a British bulldog, French poodle, German dachshund and an Austro-Hungarian mongrel. The Royal Navy is controlled by John Bull in the costume of a Jack Tar. To the left, Russia is portrayed as a steamroller driven by the Tsar, who has already trapped the tail of the Austrian mongrel, and threatens to crush all before him. The mongrel is also being stung by a Serbian hornet and is leashed to the German dachshund, who is having his nose bitten by the British bulldog. Below the fighting dogs lies Italy as a soldier with gun in hand, deciding which side to join. To the right, Greece stares menacingly with dagger drawn at the Ottoman Empire, who holds the gateway to the Black Sea in one hand and German ships in the other. A German dachshund puppy sits behind him on a leash sporting a fez, a reference to the 1914 Ottoman-German Alliance. There is an extensive note at the bottom, outlining the events leading up to the beginning of the war, and concluding defiantly ​“Peace has gone to the Dogs for the present — until a satisfactory muzzle has been found for that Dachshund.” The note is by Walter Emanuel (1869–1915), a regular writer for the satirical magazine Punch.

The artist responsible for the piece is unknown. Emanuel was known for his anthropomorphic books about dogs produced in collaboration with the artist Cecil Aldin, including ​‘The Dogs of War’ (1906). Although the title is similar to the present work, this was in fact the biography of a Norfolk spaniel.