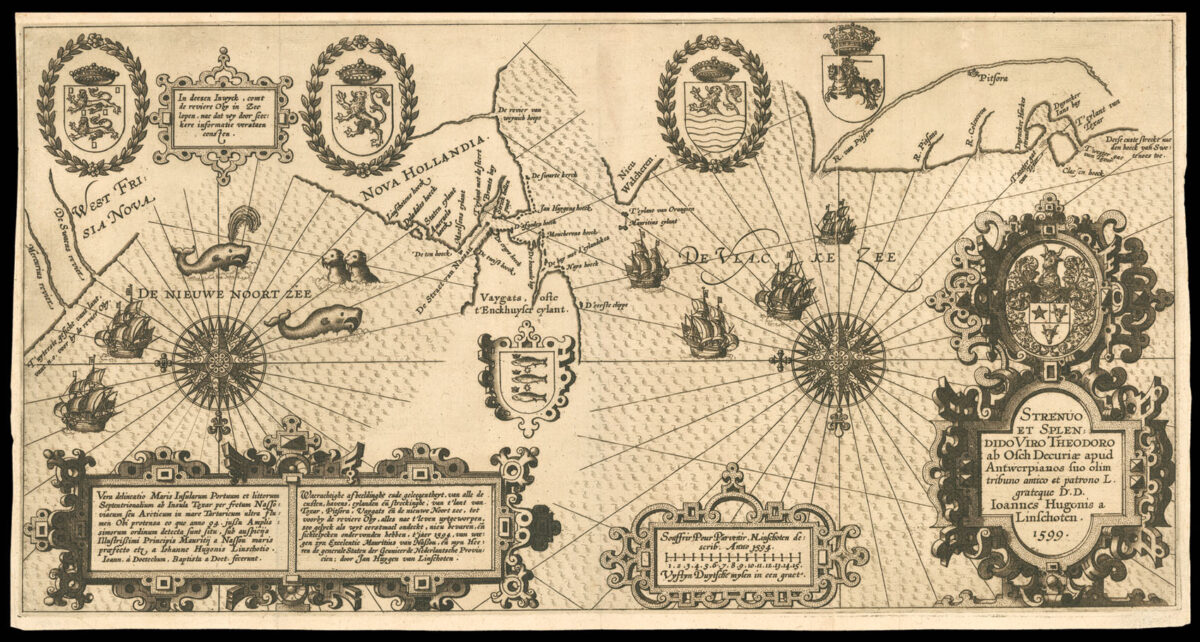 The discovery of the Northeast Passage

An important early map of the search for the Northeast Passage. The map was drawn by Jan Huyghen van Linschoten’s to illustrate his account of Willem Barentsz’s first two voyages, on which Linschoten was a crew member. It is one of the earliest maps of the area to be made by someone with direct experience of the terrain; Linschoten’s presence even makes itself felt in the toponymy, with a headland on ​“Nova Hollandia” named ​“Linschotens hoeck”, which would have been named for him when he was the first to spot it. It is orientated to the south and centred on Vaygach Island, with the Barents Sea on the right and the Kara Sea on the left. A pair of spouting whales and playful seals appear in the water.

Jan Huyghen van Linschoten (1563–1611), adventurer and cartographer, secured passage to India in 1583 as secretary to Dominican Vicente da Fonseca, the newly appointed Portuguese Archbishop of Goa. As a result of his position, Linschoten had access to secret information, including the portolan charts of the Portuguese route to the East Indies that had been well guarded for over a century. With an impressive disregard for the trust placed in him, Linschoten began to copy these maps meticulously, and published them when he returned to the Netherlands after the death of the archbishop in 1589.

His interest in sailing routes to the Indies continued, however, as shown by his participation in the voyages of Barentsz. During the late sixteenth century, the leading merchants of the Dutch Republic became very interested in opening trade routes with East Asia. However, they were concerned that the established route to Asia, by way of the Cape of Good Hope and the Indian Ocean, was under the control of their enemies, the Portuguese. Moreover, the established route was long and arduous, and any navigable polar route to Asia would be much more desirable. Willem Barentsz (c.1550–1597) set out to find this route. He made three voyages to the North Polar regions in search of a northwest passage to the Pacific. Linschoten accompanied Barentsz on the first two voyages: the first reached the west coast of Novaya Zemlya where they were the first Europeans to see a polar bear, and the second was forced to turn back after the Kara Sea froze over. Fortunately for him, Linschoten did not take part in the third fateful voyage when Barentsz’s crew were forced to spend a winter on the ice.