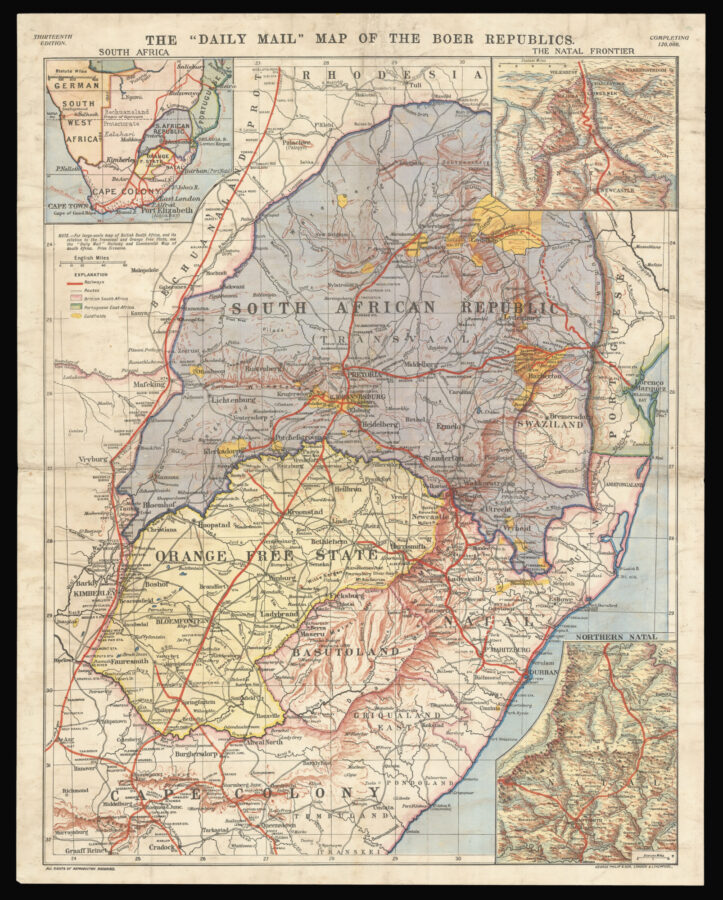 The ​“Daily Mail” map of the Boer Republics

This map, produced and published by the Daily Mail, presents the lands across which the Boer War was waged from 1899 to 1902. Although no mention is made of the conflict, the map focuses on the three states between whom the war was fought, each distinguished by colour: the South African Republic in purple, the Orange Free State in yellow and British South Africa in pink. In October 1899, President Kruger of the South African Republic had ordered the British to remove all troops from the borders. When the British government refused, the Boers declared war and mounted strikes in the Natal regions, which are shown in greater detail on the two inset maps featured in the upper and lower right corners. Areas of conflict such as Newcastle and Ladysmith, where battles and sieges occurred during the following year, are featured prominently on these maps. A larger-scale map of sub-equatorial Africa also appears in the upper left corner, putting into perspective the vast scale of British colonial rule. The goldfields, represented in a bold yellow, allude to the motivating factor behind the ​‘Scramble for Africa’ that led the European powers to compete for territory across the continent. One of the impacts had by these Europeans is shown by the thick red lines that run across all the maps, representing the expanding railway system developed during the latter half of the nineteenth century.

At the same time as the Second Boer war was being waged abroad, the news media at home in Britain was undergoing a revolution. The popularity of the Daily Mail had grown on a remarkable scale since its launch in 1896, and during the period of conflict in Africa, it saw its circulation increase to an unprecedented 1 million issues a day. With 25 reporters in the field, it proved a key source of information for Britons eager to stay informed on what was considered one of the nation’s greatest ever wars. Alongside their maps of the Boer Republics, of which this is the thirteenth edition, the Daily Mail created a successful charity campaign to support the families of those soldiers on active duty. Readers were encouraged to purchase fold-out posters emblazoned with a patriotic drawing of ​‘A Gentleman in Khaki’ heroically brandishing a bayonet, and the words of ​“The Absent-Minded Beggar”, a poem written by the ardent colonialist, Rudyard Kipling. Advertised on this map is also the ’ ​”Daily Mail” Railway and Commercial Map of South Africa’, which could be purchased for a sixpence. Despite its contemporary popularity, this map is now a rare find on the market.