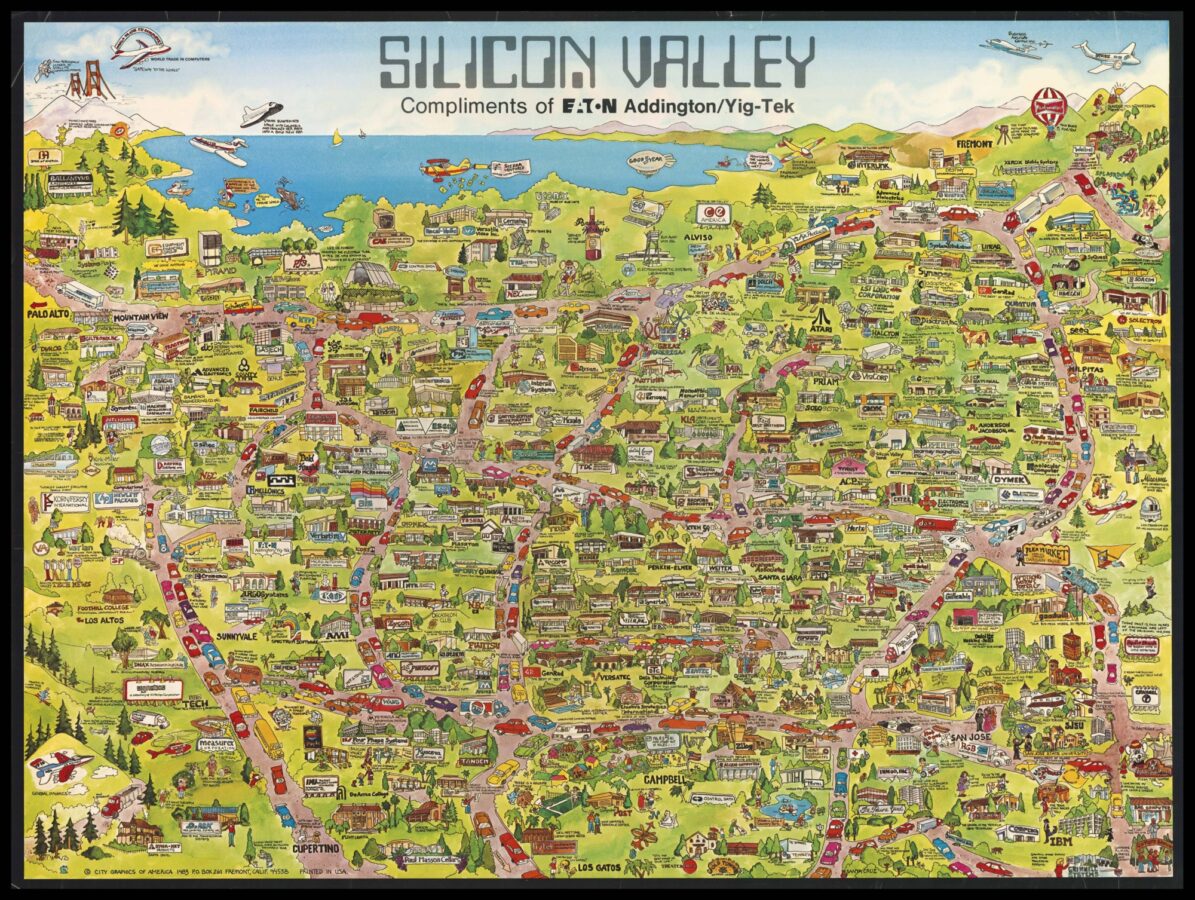 The cradle of the computer industry

A charming map of Silicon Valley, providing a fascinating snapshot into the early days of the tech boom in California. The map is filled with the logos and buildings of software and computer companies. Some of the companies shown have survived, and are now household names: IBM, Toshiba, and Hewlett Packard, which is accompanied by one disk saying to another ​“You must be a floppy disk!”. At the lower edge is the distinctive original rainbow logo of what is arguably now the most famous software company in the world, Apple. Just above the Apple building, one computer attempts to chat up another with the line ​“You must be a smart terminal”! Underneath Fujitsu, a man tries to restrain his dog, assuring the other dog that ​“His byte is worse than his bark”. The map also shows some of the victims of the failure of the market. Atari, at the upper right, would fold the year after the map was made following the recession in the video game industry in North America. VisiCorp, in the centre, suffered ongoing legal battles, and is now owned by Paladin. For the companies in the map, however, the risks were worth it to be at the cutting edge of technology: a little caveman at the lower edge is labelled ​“B.C., Before Computers!”.

The map is also an affectionate record of life in Silicon Valley outside of the tech bubble, filled with facts, local legends and attractions. The importance of the two major universities, Stanford and Santa Clara, in innovations and education is emphasised: Stanford was where the first heart transplant took place in 1968 and the University of Santa Clara was the oldest Catholic university on the west coast. There are several prominent vineyards, including one that ​“serves the White House”. Gary Dahl, the man who became a millionaire by selling 1.5 million ​‘Pet Rocks’ for four dollars each, is shown with one on a lead below Measurex. And the local Chuck E. Cheese (their headquarters is at the top of the map) is labelled as a great place to have a birthday.

The map was produced by a small graphic design company, City Graphics of America. City Graphics would produce fun pictorial maps and ask businesses to buy a place on the map. They would then simplify the urban landscape to make room for the names of the businesses and comic illustrations.

We have only been able to trace one institutional copy in the Computer History Museum, California, and no other copies offered for sale. The California copy is subtitled ​“Courtesy of ELXSI” rather than ​“Courtesy of EATON Addington Yig-Tek”, suggesting that companies paid to have different versions of the map with their names attached. In this printing of the map the zip code appears as 94538; earlier examples appear with the zip code as 94537.