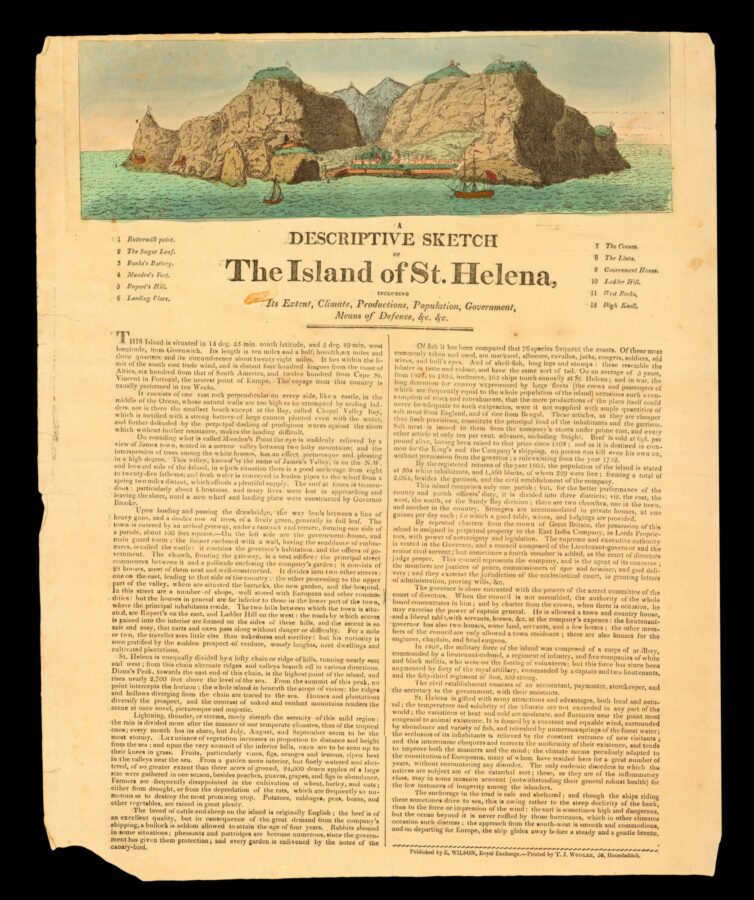 A descriptive sketch of the Island of St Helena: including its extent, climate, productions, population, government, means of defence, &c. &c.

To the upper part of the broadside an engraved view shows the port of Jamestown nestled on the north side of the island. A key below lists 12 places of interest including: Buttermilk point; The Sugar Loaf; Banks’s Battery; Munden’s Fort; Rupert’s Hill; Landing Place; The Cranes; The Lines; Government House; Ladder Hill; West Rock; and High Knoll.

The text below goes into great detail regarding the island’s geography, climate, its agricultural produce — an abundance of fruit, though wheat is difficult to grow due to the numerous rats on the island; its governance which is controlled by the East India Company; its population, which in 1805 consisted of ​“504 white inhabitants, and 1,560 blacks, of whom 329 were free”; and the island’s defence which had recently been increased by the deployment of 500 men from the 53rd regiment of foot, most likely for the arrival of Napoleon himself.

Napoleon is not named in the text suggesting that the print was published a little after his surrender to British forces on 15th July, and before his arrival on the island on 15th October 1815.

The broadside bears the impirnt of Effingham Wilson, a well known publisher of radical texts, who moved to the Royal Exchange address in 1812. It also bears the imprint of another radical Thomas Jonathan Wooler, the publisher of the Black Dwarf and who Viscount Castlereagh would later call ​“the bugleman of the Radicals”.