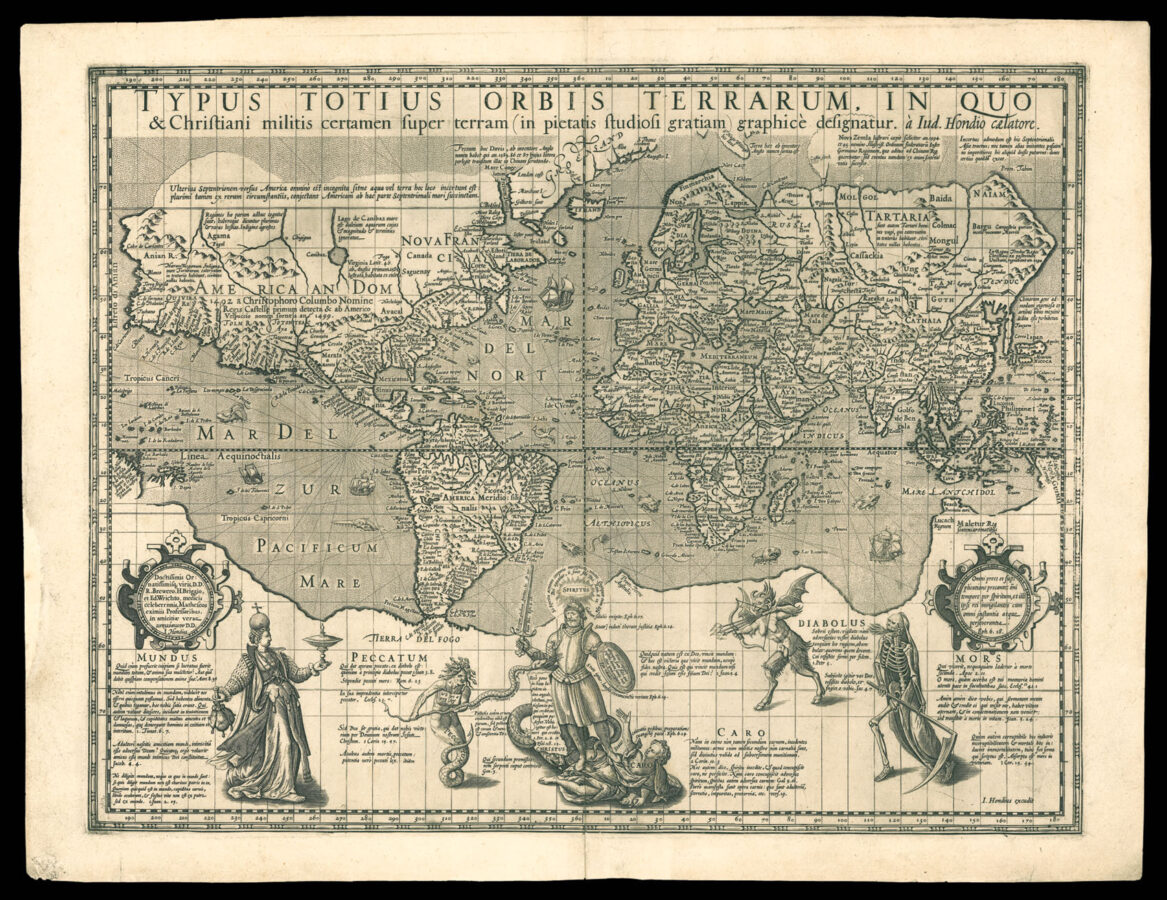 The ​“Christian Knight” map of the world is the first map on Mercator’s projection to be produced after the great geographer’s death. Mercator’s projection is one of the great intellectual inventions of man, solving the ancient classical problem how to map the spherical earth onto a flat sheet of paper, while preserving the bearings of the compass as straight lines. The projection was first used on a huge wall map made by Mercator, only three examples of which survive (BNP, Paris; Basle; and Rotterdam).
Mercator’s projection severely distorts and exaggerates the size of regions far from the equator, as the scale increases from the equator to the poles. Greenland takes as much area on the map as Africa, while in fact Africa is fifteen times greater. Antarctica appears the biggest continent, although it is actually the fifth in size. But the fact that lines of true bearing or course are straight lines outweighs these distortions.
The map is legendary also for its allegories with deep philosophical levels, with the Christian Knight and King fighting the Rulers of Darkness. The map is famous for the depiction of Roanoke, the first English colony in America. John Milton owned an example of this map that inspired him for his ​‘Paradise Lost’.
Representing the three-dimensional spherical earth on a two- dimensional flat map can be done in infinitely many different ways, but is impossible without introducing distortions. In 1569 the great geographer and cartographer Gerard Mercator came up with the brilliant idea of the cylindrical map projection, which became the standard map projection ever since. Despite the distortion, it has the essential property that directions of the compass are preserved as straight lines on the map, making it ideal for navigation.
Mercator himself could not solve the mathematical calculations for his projection. It turned out that this required the ​“Integral of the secant function of trigonometry”, which became one of the ​“outstanding open problems” of the sixteenth and seventeenth century, a famous problem also addressed by Isaac Newton but not solved until 1668 by James Gregory. But a numerical solution (by what we would today call Riemann sums) was developed by mathematician Edward Wright in London as early as 1596, specifically for the practical navigational purpose of constructing a perfect Mercator map.
Wright finally published his findings in 1599 in his famous work ​‘Certaine Errors in Navigation’, but his draft manuscript of 1596 had already been used by his friend Jodocus Hondius for the ​“Christian Knight” map of the world. Hondius however employed Wright’s calculations without asking permission. Although Hondius sent apologetic letters to his friend, Wright condemned Hondius’s deceit and greed in the preface to ​‘Certaine Errors’. He wryly commented: ​“But the way how this [Mercator projection] should be done, I learned neither of Mercator, nor of any man els. And in that point I wish I had beene as wise as he in keeping it more charily to myself “.
In addition to being a revolutionary map for its advanced projection, it is one of the best-known and mysterious of all maps, decorated with elaborate artwork and allegories with deep philosophical and ideological levels. The scenes at the foot of the map show the Christian Knight fighting the rulers of darkness: Vanity, Sin, Carnal Weakness, the Devil and Death. Hondius derived the scene from a very rare print, also present here, by Hieronymous Wierix after an original drawing by Maerten de Vos. Peter Barber, in ​“The Christian Knight, the Most Christian King and the rulers of darkness” (‘The Map Collector’ 48, 1989, 2–8) makes a convincing case that portrait is that of Henry IV of France and that the purpose behind the maps production was to rally protestants in England and throughout Europe to the side of Henry IV of France at the moment of crisis in his struggle against Spain and the Catholic powers of Europe.
The map is also famous for its up-to-date mapping, including Walter Raleigh’s lost colony of Roanoke, and showing the results of the circumnavigations by Drake and Cavendish.
Only six other examples are recorded today: Ann Arbor, William
L. Clements Library (Maps 8‑C-19); London, The British Library (Maps
188.k.1 [5]); London, The Royal Geographical Society (264 H 14 [4]); Nürnberg, Germanisches Nationalmuseum (Qu. 4 H 2229)1; Wells- next-the Sea, Holkham Hall (Innys Collection) UK; Wien, Österreichische Akademie der Wissenschaften (Woldan Collection [K‑V(Bl):WE 49]). 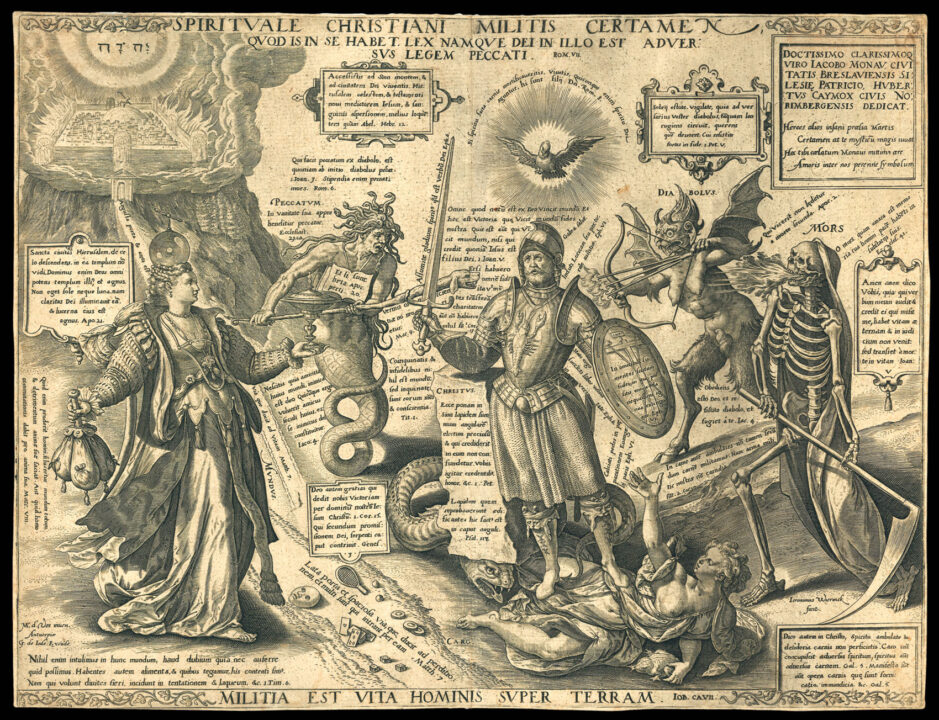