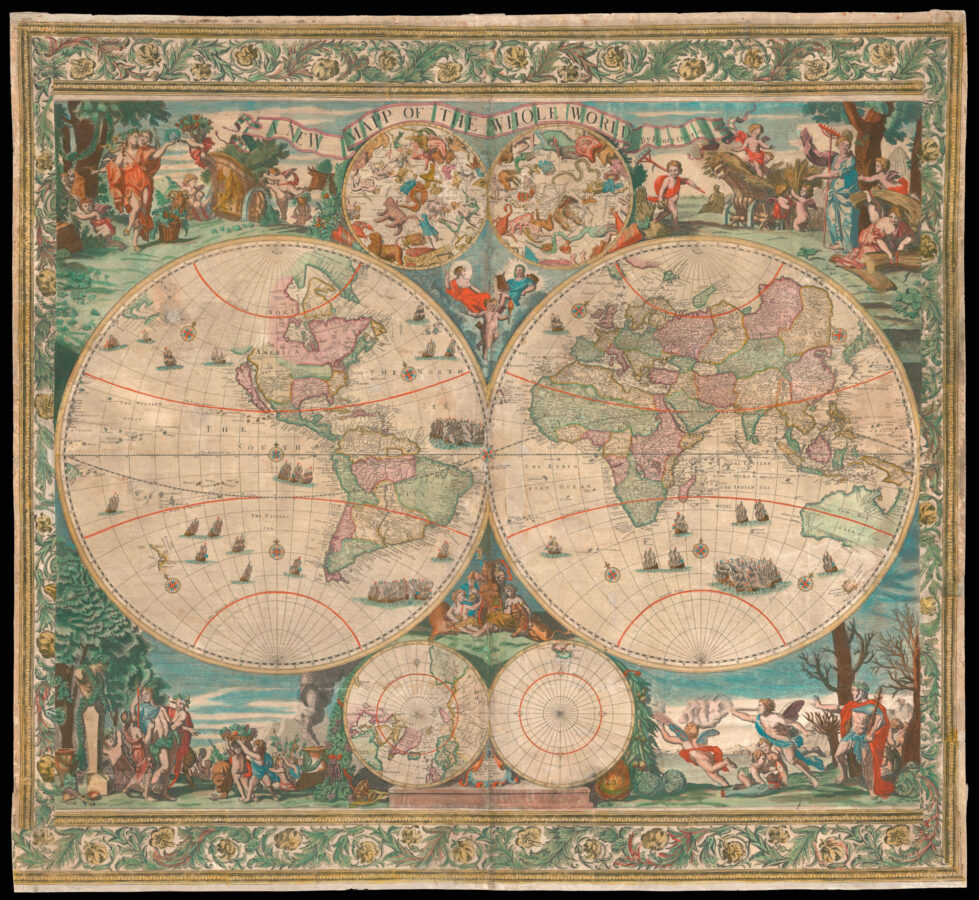 A New Mapp of the Whole World.

Henry Overton (1676–1751) was a publisher and mapseller who followed in the footsteps of his father, John Overton, when he took over his shop and stock in 1707. Over the course of his career he published a large number of maps, as well as numerous views, portraits and sporting prints. Overton’s maps were largely focused on the British Isles, and he also produced revised and updated editions of John Speed’s country atlas. One of his most visually striking and rarest works, however, is ​‘A New Mapp of the World by Henry Overton’.

The map describes the world in two hemispheres, with two smaller pairs of hemispheres above and below, showing the heavens and the polar regions respectively. This design reflects the world maps published by Gerard Valk at the end of the seventeenth century, but Overton’s geographical configuration is notably less sophisticated, corresponding more closely to the maps of the 1660s. There are significant and anachronistic omissions and errors: the Great Lakes form an open-ended inland sea; New Guinea fails to appear; the Straits of Anian are shown to the north-west of California. Such are the inaccuracies on the map that Shirley has suggested that ​“it is possible that an earlier unrecorded four-sheet map has been re-issued perhaps within a new frame-under Overton’s imprint”.

Another interesting cartographic feature is that the Pacific is labelled ​“The Chinesian Ocean”. The equator, ecliptic, tropics, Arctic and Antarctic circles are all indicated, and there are 11 compass roses across the map. The polar projections below the main image offer another perspective of the northern and southern hemispheres, although the latter lacks any land mass around the south pole. Above, the celestial map depicts the Ptolemaic constellations as mythical figures and sigils.

The decorative features that surround the three pairs of hemispheres demonstrate that this map was intended to be just as ornamental as it is informative, if not more! Boldly coloured vignettes show allegorical and mythological scenes in an idyllic pastoral setting. Putti gather sheaths of corn and offer grapes to a tipsy Bacchus, while another pair of divine figures recline on the clouds above. Surrounding the entire image are elaborate floral borders in the sumptuous baroque style typical of the Hanoverian period.

The only other recorded example of Overton’s world map is in the keeping of the British Library. The imprint on the BL copy is torn and illegible, and as a result, the map has previously been dated to c1700. The imprint on the present example, however, clearly shows that it was published in 1738 and sold from Overton’s premises in Newgate.