The Chaworth Roll is a genealogical roll that traces the pedigree of the kings of England from Egbert (829–839) to Edward II (1307–1327), with a later an extension to Henry IV (1399–1413). Written in Anglo-Norman French, and comprising nine parchment membranes at some 6.5 metres in length, it also incorporates the second earliest recorded road map of the British Isles, a fine example of early English vernacular art, and a stylised map of the Anglo-Saxon Heptarchy.

Such rolls were chiefly didactic in purpose, and often made to educate children. Indeed, it is likely that the Chaworth roll was commissioned as one of four scrolls made for the children of Sir Thomas Chaworth (1290–1343). However, as easily understood documents presenting a popular narration of history, they also serve as secular and pictorial justifications for the authority of the royal line. British historical convention dictates that the crown’s pedigree begins with Egbert as he is traditionally credited with bringing peace to, and uniting, the seven disparate Anglo-Saxon kingdoms of Kent, Essex, East Anglia, Northumbria, Mercia, Wessex, and Sussex. Because of this, medieval genealogical rolls often begin with a description of these disparate kingdoms in order to illustrate the historical legitimacy of the power of the crown. What marks the Chaworth roll as distinctive, however, is the inclusion of additional ​“pictorial prefaces” showing both the Royal
Roads of England, and the ​“Wheel of Fortune”. It can be argued that the Royal Roads map is included to depict the legal authority of the crown, the wheel of fortune illustrates the role of the fates in monarchical power, and the second ​“map” of the Anglo-Saxon Heptarchy represents the historical legitimacy of the royal line. Taken together these three prefaces can be seen as statements of the power of the crown and the right to rule by dint of geography, fate, and history. This moves the role of the roll from that of an educational tool to an instrument of power, politics, and propaganda.

The roll begins with three large roundels representing, in turn, the Royal Roads of Britain, a Wheel of Fortune, and the seven Anglo-Saxon kingdoms, known as the Heptarchy. The Heptarchy diagram is followed by a passage explaining its content. The royal pedigree then begins with King Egbert, and continues to Edward II and his four children, before an additional membrane continues the genealogy from Edward III to Henry IV’s children (c1399-1413).

The backbone of the genealogy is the representation of the Kings of England and their children in medallions interconnected with green bands. Large medallions containing fictive portraits of the kings are arranged along a central axis, with smaller medallions containing images of each monarch’s children. Kings themselves are depicted twice, first among their siblings as their fathers’ sons, and again in larger roundels as crowned monarchs. Only the depiction of Edward l’s children deviates from this circle-and-line pattern: these portraits are represented in a quasi-architectural arcade of niches. A single artist, dubbed here the Chaworth Master, executed all of the drawings on the first eight membranes of the roll, except for six portrait roundels and eight of the children of Edward I portrayed in niches on the eighth membrane.

All of the portrait medallions contain full-length figures seated on benches. The kings are crowned, and hold swords, scepters, or both. Most of the kings face forward, confronting the viewer directly, while their children usually turn to face one another in pairs, gesturing towards one another conversationally. These pen-and-ink portraits are subtly washed with colour, the drapery of their clothes tinted with pale green and red.Backgrounds are painted in solid washes of either red or blue or, occasionally, left as bare parchment. The compass-drawn roundels and the bands that connect them are washed with a bold green.

Passages written in Anglo-Norman French accompany the circle-and-line pedigree, summarizing the main features of each monarch’s tenure, including the duration of the reign and the place of the king’s burial. A single scribe is responsible for the text on the first seven membranes of the roll, including the inscriptions that identify each portrait, in a clear Gothic book-hand. Two additional scribal hands added texts to the penultimate membrane.


The Chaworth Roll has been well researched and discussed as noteworthy for both its content and artistic merit, both of which have been well described in an essay by Professor Alixe Bovey, Head of Research at the Courtauld Institute of Art. However, the Chaworth Roll has not been previously appreciated as a work of medieval cartography. New medieval maps rarely come to light, and fewer still are offered for sale. When they do, they are usually small scraps and partial maps of estates or settlements, parochial in nature. The Chaworth Roll is, therefore, remarkable in its use of highly stylised cartography as data visualisation and propaganda.

A FULL CATALOGUE DESCRIPTION AND PROFESSOR BOVEY’S ESSAY IS AVAILABLE ON REQUEST. 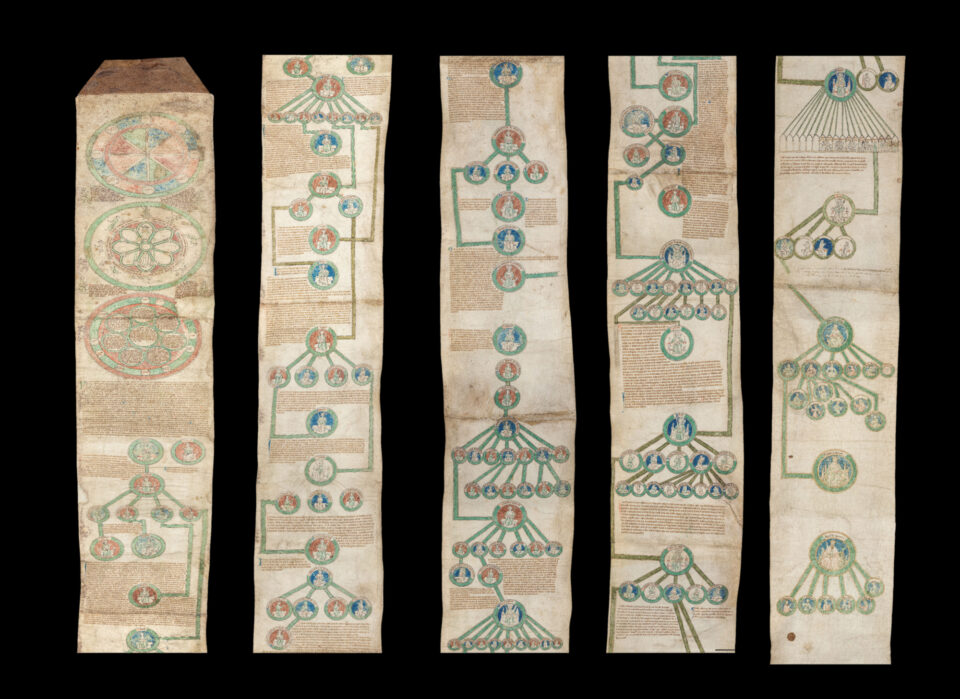 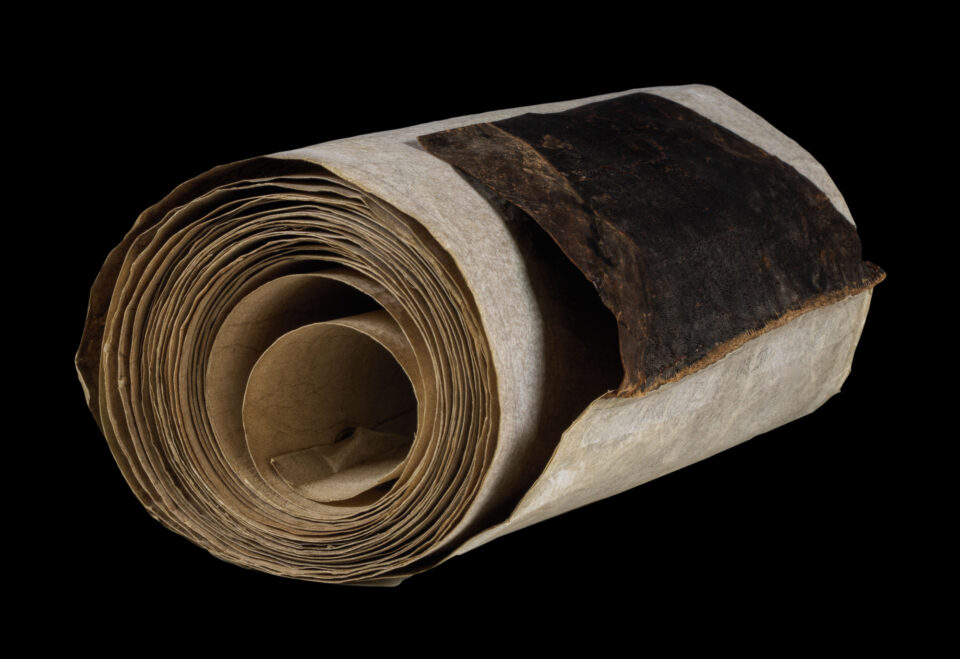