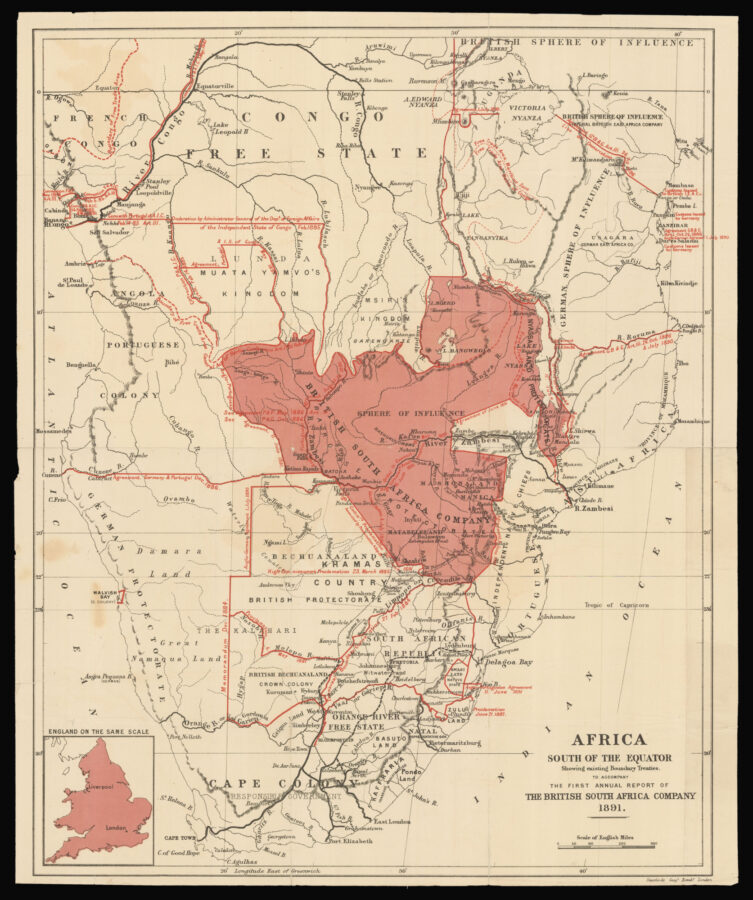 The British South Africa Company amid the scramble

This map of sub-equatorial Africa is one of the earliest maps created by the British South Africa Company (BSAC), presented as part of its first annual report in 1891. It shows the European colonial territories during the early years of the ​‘Scramble for Africa’, which would play out over the following two decades. The boundaries between these areas are shown boldly in red, and text beside each one identifies the agreement by which the border was created. These range from 1884 to 1891, but the majority are attributed to the General Act of the Berlin Conference in 1885. During this conference, the European powers had decided to divide up Africa, and had agreed on the partitions shown here. These were not fated to remain so stable, however, as the divisions were challenged by conflicts with natives and between the European forces themselves.

This map highlights the sphere of influence held by the British South Africa Company, which had been established by Cecil Rhodes to exploit the expected mineral wealth of Africa from ​‘Cape to Cairo’ in 1889. Following reports made in 1866 by a young geologist, Carl Mauch, that miles of goldfields were lying untapped in Mashonaland, the directors of BSAC became determined to make the most of this hidden potential. When the anticipated gold failed to materialise, the company found itself in financial difficulties, and many of their enterprises, such as railway expansion, ground to a halt. It nonetheless remained in charge of the region until 1924, when administrative power and control of the land was given over to colonial Governors. The area as a whole is not named here, but was known as Zambesia until the mid-1890s, when it was re-named Rhodesia after the founder of BSAC. Although clearly more concerned with colonialist politics than geographical data, the map nonetheless displays the names of significant cities, ports, rivers and lakes. The inset map of England in the lower left corner offers a comparative perspective on the vast scale of Africa, and the British possessions there.

This map was published at Stanford’s Geographical Establishment in London, founded and run by Edward Stanford. At this point in time, Stanford had already become the sole agent for Ordnance Survey Maps in England and Wales, and two years after the publication of this map, he was to receive his royal warrant as Cartographer to the Queen. As well as the Ordnance Survey, he was an agent for the Admiralty, the Geological Survey, the India Office and the Society for the Diffusion of Useful Knowledge. Stanford continued to produce maps for the British South Africa Company, which gradually became larger and more detailed surveys of the company’s territories. This early map, however, is extremely rare: although the first BSAC Annual Report, of which it is a part, is held in New York Public Library and the British National Archives, we have not been able to trace another example of the individual map.