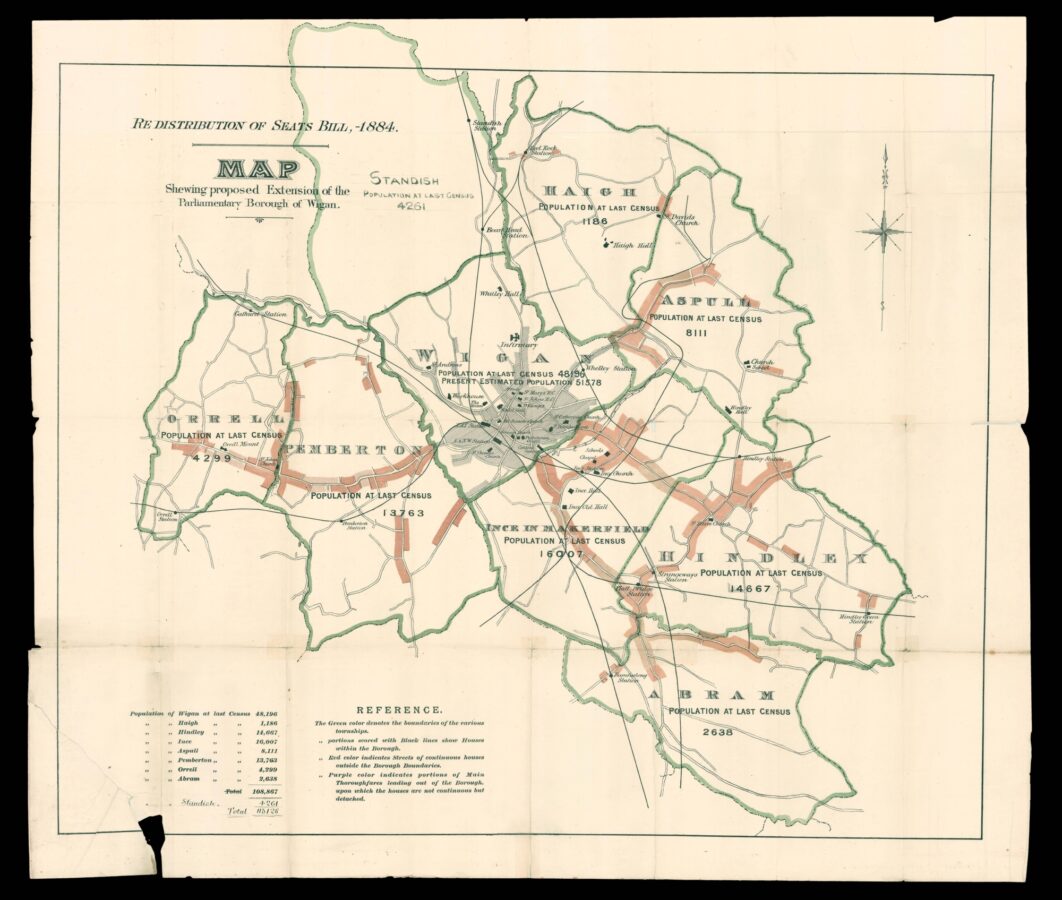 The borough of Wigan

A map of the borough of Wigan, now part of Greater Manchester. The townships of the borough are outlined in green, and marked with their name and population. The name and population of Standish has been added by hand, and the figure for the total population of Wigan has been amended accordingly. The accompanying pamphlet contains extracts from the local press concerning the effects of the Redistribution of Seats Act on Wigan.

The Representation of the People Bill was introduced to the House of Commons by William Gladstone in 1884. The Bill aimed to extend the franchise by making the voting qualifications for the country electorate the same as in urban areas. Although it was passed by the Liberal-dominated Commons, it was opposed by the Conservative-dominated Lords. Lord Salisbury, the Conservative leader, was concerned that the increase in rural voters would have disastrous consequences for his party. The Lords’ rejection of the Bill provoked outrage both in the Commons and amongst the electorate, and resulted in the Arlington Street Compact between the Conservatives and Liberals. Salisbury allowed the Bill to pass with the proviso that it should do so in conjunction with a bill to redistribute parliamentary seats, as the 1885 Redistribution of Seats Act. This meant both that the majority of two-member constituencies were reduced and that some boroughs were disenfranchised altogether and absorbed by others.

The map and pamphlet were produced to protest the removal of one of Wigan’s two Members of Parliament. Under the terms of the Act, existing boroughs with a population between 15,000 and 50,000 had the number of members they sent to Parliament reduced from two to one. The pamphlet argues that when the 1881 census was taken, on which the Act depended, some 2,000 of the inhabitants were away seeking work during a mining strike; if they had been there, the population would have been over 50,000 and thus the two members would have been retained. Other extracts cite the importance of Wigan to the surrounding country, and the fact that the boundaries used to determine the population did not take into account the communities which were locally regarded as being part of the town. Several imply that the perceived ill-treatment of the borough is motivated by its Conservative tendencies under a Liberal government; others that newer boroughs are being helped at their expense. The map shows the area which in their opinion should be considered the true boundaries of the borough, and that the population of this area would be well above the minimum requirement for a two-member constituency.

The map and pamphlet were produced by Thomas Wall, a printer in Wigan who also published the Wigan Observer, a tri-weekly newspaper which appears in the pamphlet.