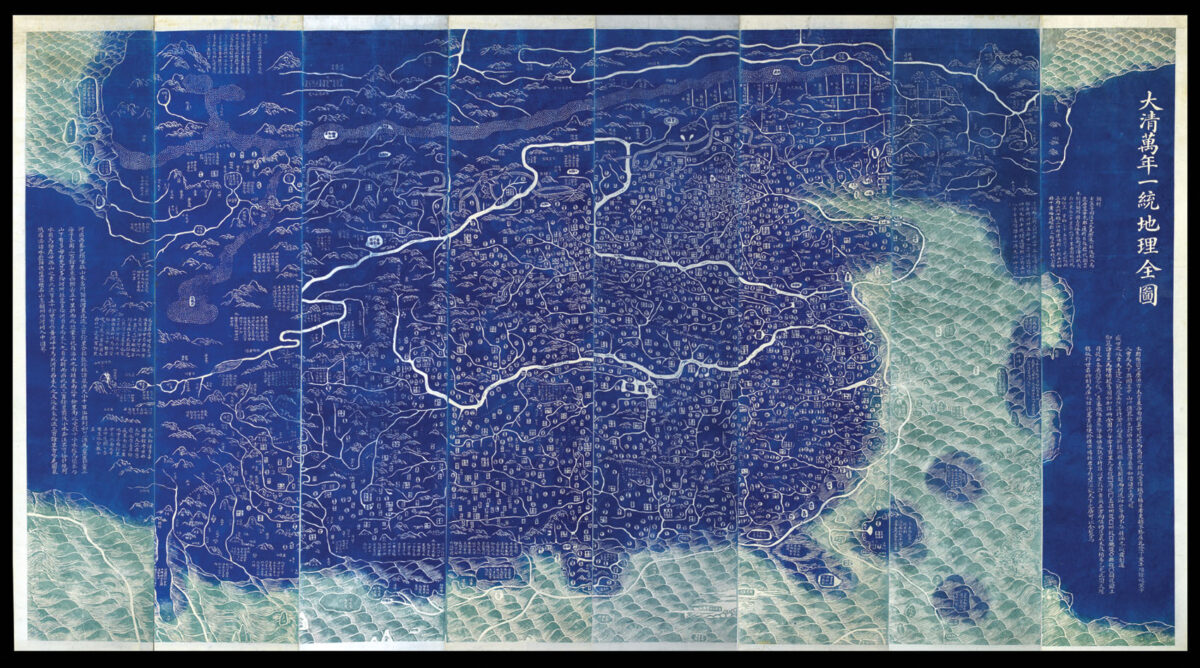 The ​“Blue Map” of the World

An extraordinarily rare cartographic document that is based on research originally presented to the Qianlong emperor by Huang Qianren (fl. 1760- 70) in 1767. The title of the map is as much a political programme of the Qing as it is a geographical record. It shows China at the height of the Qing empire, celebrating the ​“unified status of all of Chinese borders” (Pegg).

”[This] ​‘complete’ map minimizes the European notion of a map of the world, its centralized and marginalizing construct confirming the Qing/​Chinese notion of the Central Kingdom” (Pegg).

The map was designed to act not only as a grand political statement of the Kingdom’s place in the world, but also as an administrative tool. Its surface is dotted with provincial capitals (sheng), a square with a small rectangle on top; prefectures (fu), a square; independent district magistrates (zhilizhou), a square with a triangle on top; departments (zhou), a vertical rectangle; sub-prefectures (ting), a diamond; districts (xian), a circle; frontier passes (guan), a small building; local headmen or western tribute states (tusi), a triangle; with the name appearing within each pictogram. The borders of each province are denoted by dotted lines.
As well as administrative areas, the map depicts topographical and geographical information. Much attention is given to the waterways: the source of the Yellow River is correctly located in the Bayan-har mountain and is accompanied by an expansive explanatory note; the Minjiang River is given as the source of the Yangtze. Mountain ridges and the Great Wall are depicted in elevation, and desert areas are stippled. Several neighbouring countries are marked including Russia, India, Siam, Vietnam, Japan, and, most notably, Korea, who, as the chief vassal state, receives a great deal of commentary.To the upper left of the map are both the Mediterranean or ​“Small Western Ocean”, and Atlantic or ​“Great Western Ocean”, with Holland and England depicted as islands in the Atlantic.

One of the more striking aspects of the map is that the ​“intentionally vague geopolitical lines of the [empire’s] frontiers and beyond clearly indicate the Qing’s perception of the world around them … [when] … all foreign entities simply inhabited the fringes of the empire” (Pegg). This together with the empire’s size reaffirms the status of the kingdom as the geographical, political, and cultural centre of the world.

The map which the present example is based upon was first produced in 1767 for the Qianlong Emperor to celebrate the unification of the Qing empire. No example of the original survives. However, a painted copy of the map was produced in 1800 by Huang Zhengsun, and now resides in the Beijing National Library.

The map was then revised and enlarged in around 1811, resulting in the present work. This version was printed in two colours: blue and white, and black and white. There are examples of this version in the Maclean Collection in Chicago, the Library of Congress, and the Beijing National Library.