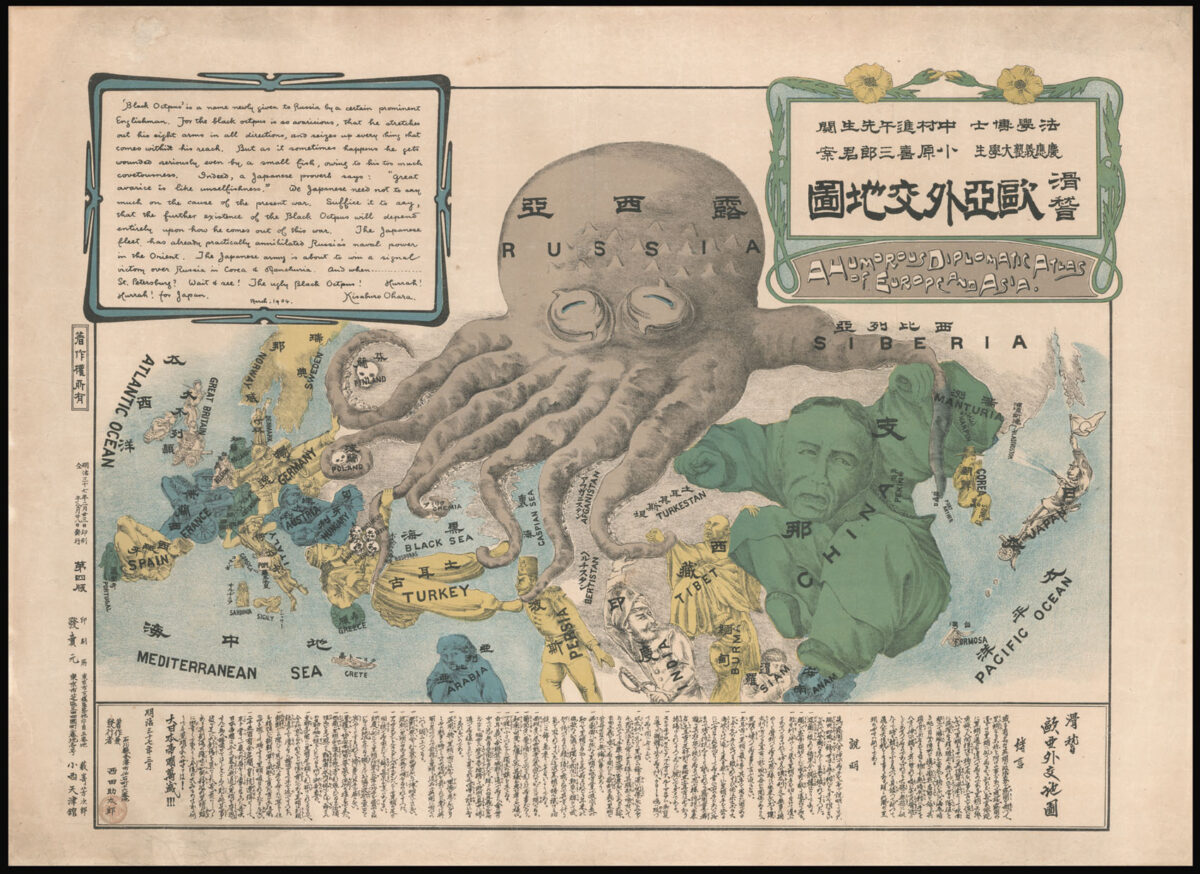 A Humorous Diplomatic Atlas of Europe and Asia.

A fine example of the rare 1904 Kisaburō Ohara satirical ​‘Octopus Map’ of Europe and Asia.

Composed at the outbreak of the Russo-Japanese War (1904 – 1905), Ohara here follows the conventions established by J.J. van Brederode ( Humoristische-Oorlogskaart, 1870) and Fred Rose (Serio-Comic War Map, 1877). These two maps established the convention, of satirizing Russian expansionism as a menacing Kraken-like ​‘Black Octopus.’ Whereas Brederode and Rose confine their images to Russia, Ohara has here expanded the idea to encompass all of Eurasia. Russia’s eight grasping tentacles extend across Europe and Asia; on many countries they already have a firm grip. Finland, Poland, Crimea, and the Balkan nations are represented as skulls, while tentacles grasp Turkey around the foot and waist, Persia about the neck, and Tibet by the arm. The Trans-Siberian Railway and the South Manchuria Railway, represented by the rightmost tentacle, had by this time extended Russian influence into Manchuria as far as the valuable ice-free Russian stronghold of Port Arthur. As this map was issued in March of 1904, the struggle between Russian and Japan over control of Port Arthur was ongoing. Port Arthur was surrendered to the Japanese, who defeated the Russian Fleet in December of 1905, several months after this map was printed. Ohara sums up the situation in his English language descriptions of the map, printed in the upper left,

​“Black Octopus is a name newly given to Russia by a certain prominent Englishman. For the black octopus is so avaricious, that he stretches out his eight arms in all directions, and seizes up every thing that comes within his reach. But as it sometimes happens he gets wounded seriously even by a small fish, owing to his too much covetousness. Indeed, a Japanese proverb says: ​‘Great avarice is like unselfishness.’ We Japanese need not to say much on the cause of the present war. Suffice it to say that the further existence of the Black Octopus will depend entirely upon how he comes out of this war. The Japanese fleet has already practically annihilated Russia’s naval powers in the Orient. The Japanese army is about to win a signal victory over Russia in Corea and Manchuria. And when … St. Petersburg? Wait & see! The ugly Black Octopus! Hurrah! Hurrah! for Japan.“

It has been argued by New York collector P. J. Mode, and others, that this map was probably intended for an English as much as a Japanese audience. He reminds us that the Russo-Japanese war was primarily a naval engagement. The map served as a warning to the British – stay out of the war. By April of 2004, on month before Ohara printed this map, the Japanese had already defeated the Russian Navy. Only foreign influence, potentially in the form of the powerful British navy, could have prevented the Japanese from taking Port Arthur.

On the other hand, the map also clearly expresses Japanese Imperial intentions. The English suggest boldly suggests that the Japanese may well advance as far as St. Petersburg. In terms of the geographical representation of central Asia, it is noteworthy that China’s borders are not that of Qing China, buy rather are severely limited, excluding Chinese claims to Tibet and Turkestan.

This map was drawn by Kisaburō Ohara while a student at Keiō Gijuku University. It was published by Suketarō Nishida. The map is rare by any standard with only two institutional collection examples identified by the OCLC. Although there has been no known study of the various editions of this map, at least 5 are known, this being the 5th. Cartographically all states are identical.