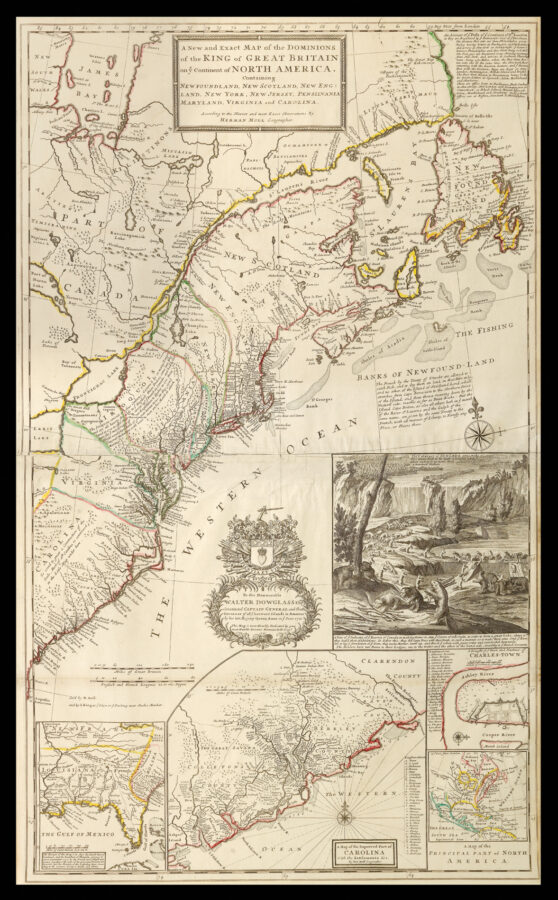 A beautiful example of the ​‘Beaver Map’, Herman Moll’s map of the British colonies. It was the first large-scale map to show English developments in North America, and the first to show postal routes, and so is considered the first American postal map.

The Beaver Map marks an important point in the dispute between France and Britain over their American territories. Moll uses it to make a clear statement of British intent: ​“The map was the primary exponent of the British position during the period immediately following the Treaty of Utrecht in 1713” (Pritchard & Taliaferro). Britain controls all the land south of the St Lawrence River and eastern Great Lakes. The insets include an important early map of South Carolina by Thomas Nairne, a map of English, French and Indian settlements in the Carolinas, and a view of Charleston Harbour. All the insets stress British interests in America: Charleston was an important British base, offering free access to the sea and support for inland expansion, and was the southernmost point of British settlement on the American mainland at the time. Moll was known for the detail of the notations on his maps, and this is no exception. Inscriptions detail everything from local Native American tribes to the condition of the terrain (one notes that a Cherokee leader was in England in 1730). In keeping with Moll’s primary aim of asserting British dominance, there is much information on the claims to various settlements.

Moll’s map is justly famous for the charming vignette of the Niagara Falls, with beavers working in the foreground. The original view of the Falls was first published in Utrecht in 1697, as part of Louis Hennepin’s ​‘Nouvelle decouverte d’un tres grand Pays Situe dans l’Amerique’. The beavers were added in 1713 by Nicholas de Fer, cartographer to Louis XIV, and published in his ​“Carte de La Mer du Sud & de La Mer du Nord.” The beavers had a dual significance. The beaver pelt industry was a major source of income for settlers, and was used to promote emigration to North America. Beavers also symbolised industry and diligence, and the fruitful results of these virtues. The colony of beavers stood as a cipher for the success of the British colonies in America.

There is a picturesque dedication to the Hon. Walter Dowglass, the captain general and governor of the Leeward Islands.