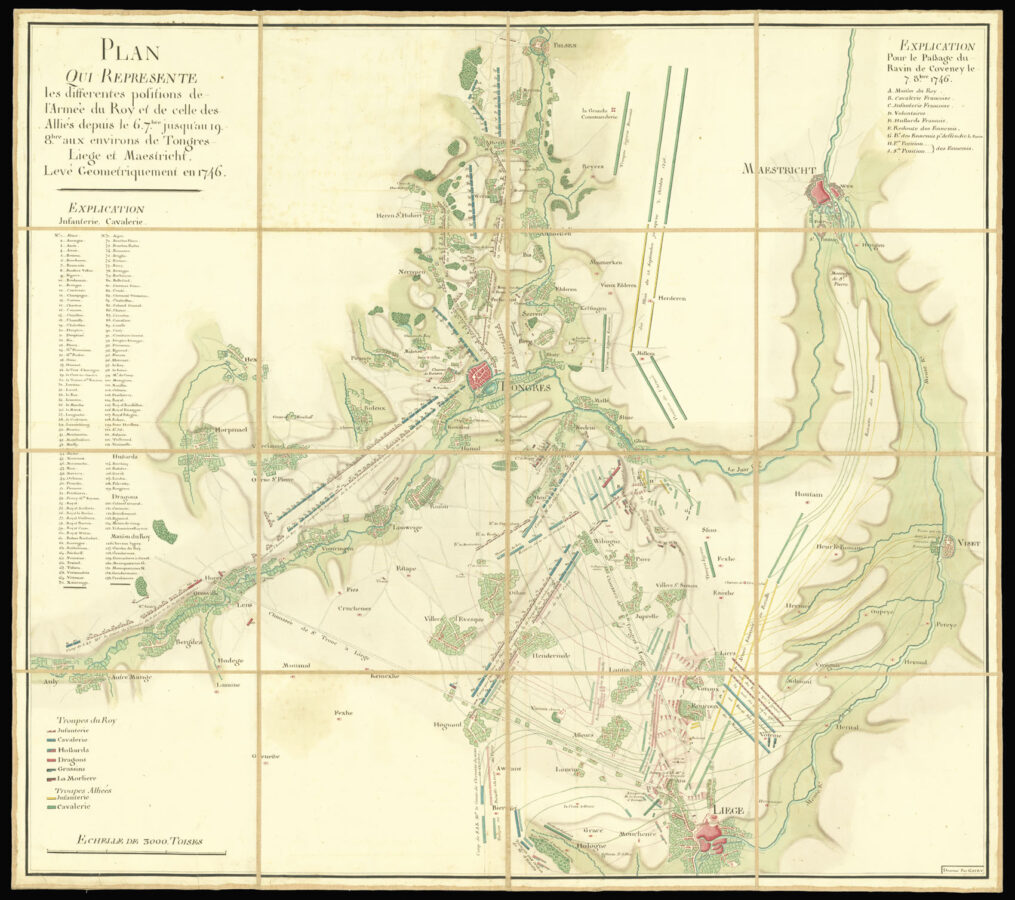 Large plan of the French and Allied armies movements in the lead up and during the Battle of Rocoux of 1746.

The plan extends from north to south from Bilsen to Liege, and west to east from Auly to Viset, and depicts rivers, forests, villages, towns, churches, and roads; elevation is shown by shading. To the left of the plan is a key to the French army listing, infantry, cavalry, dragoons, hussars, and the King’s Household cavalry. To the lower left is a key to the French and Allied armies: French infantry are marked white and red, cavalry blue, hussars blue and red, dragoons red, Grassins dark and light blue, and Morlieres dark blue and red; Allied troops, infantry yellow and cavalry green.

The plan shows the build up to the Battle of Rocoux on 11 October 1746.

The French army was commanded by Marshall Saxe and the Allied army by Prince Charles of Lorraine and Austria and the British General Sir John Ligonier. Saxe had nearly completed his campaign to take Flanders and was threatening to invade the Netherlands. The allies took up a position next to Liège with the Dutch under Waldeck on the left from Liège to Rocoux, the British and Hanoverians in the center and the Austrians on the right almost to the River Jaar.

The French main attack went against the Dutch portion on the left of the allied line between Liege and Rocoux. Heavily outnumbering the Dutch, the French defeated them on the third assault. The Dutch were forced to withdraw behind the British and Hannoverian lines. In the face of a general French advance the allied line began to give way. The Austrians on the allied right were not engaged and made no attempt to take the initiative and advance against the French left flank. Lingonier’s cavalry and some British, Hanoverian and Dutch infantry formed a rear guard that held off the French as the army withdrew. The French were victorious, although the allied army escaped from destruction. Liège fell soon after.

This was the second great victory of three for Saxe, after Fontenoy and prior to Lauffeld. The French were victorious, immediately capturing Liège and breaking Austrian control over the Austrian Netherlands for the remainder of the war.