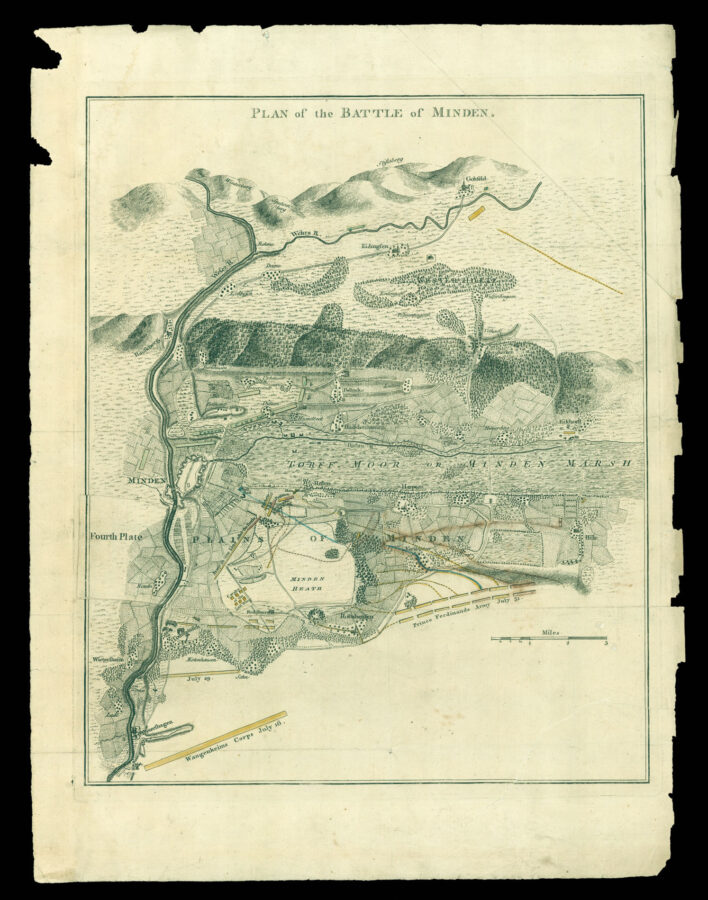 The Battle of Minden

Plan of the Battle of Minden.

A plan showing the Battle of Minden, an important engagement in the Seven Years War. An Anglo-German force under Ferdinand, Duke of Brunswick faced the French under the Marquis de Contades, the Marshal of France. The French army took Minden in July, and Ferdinand was determined to lure them out to fight. As they marched to the battleground, many of the English soldiers picked red roses from the nearby fields and wore them into battle. The French came to meet the allied forces on 1 August, and were attacked by Ferdinand before they had finished crossing the River Weser. Due to miscommunication, two of the English infantry brigades attacked the body of the French army without any support. In a panic, the British artillery commander, Captain William Phillips, forced his troops forward to help, a highly unusual move. As they approached the French, the British infantry then remained in line rather than forming the traditional square, holding off three successive waves of cavalry and destroying the formation of the French. This attack of infantry on cavalry ​“is the first recorded incident of this kind in military history”. It was a striking victory for the Anglo-German forces, although both sides sustained heavy losses, and was part of the ​‘Year of Victories’ which saw Britain win multiple battles against the French. The result of the battle was well received in Britain, and six British regiments incorporated the red rose or another reference to Minden into their tradition.

The use of overlays on maps, particularly battle plans, is recorded on manuscript maps in Britain as early as the sixteenth century. Their use on printed maps, however, was pioneered by Major General William Roy (1726–1790), a military cartographer. The use of overlays was born from a need to show multiple events on one sheet, particularly suited to recording military campaigns, and provoked a rash of mapmakers using the same technique. Roy produced a plan of the Battle of Minden (published in the Hague and London), and the present example is probably a derivative: a plan showing the latest victory in Europe using the latest cartographic techniques.

Although largely forgotten now, the Battle of Minden has inspired a curious tradition: an anonymous donor sends six red roses every year, one for each of the ​“Minden Regiments”, to the British Consulate in Chicago.