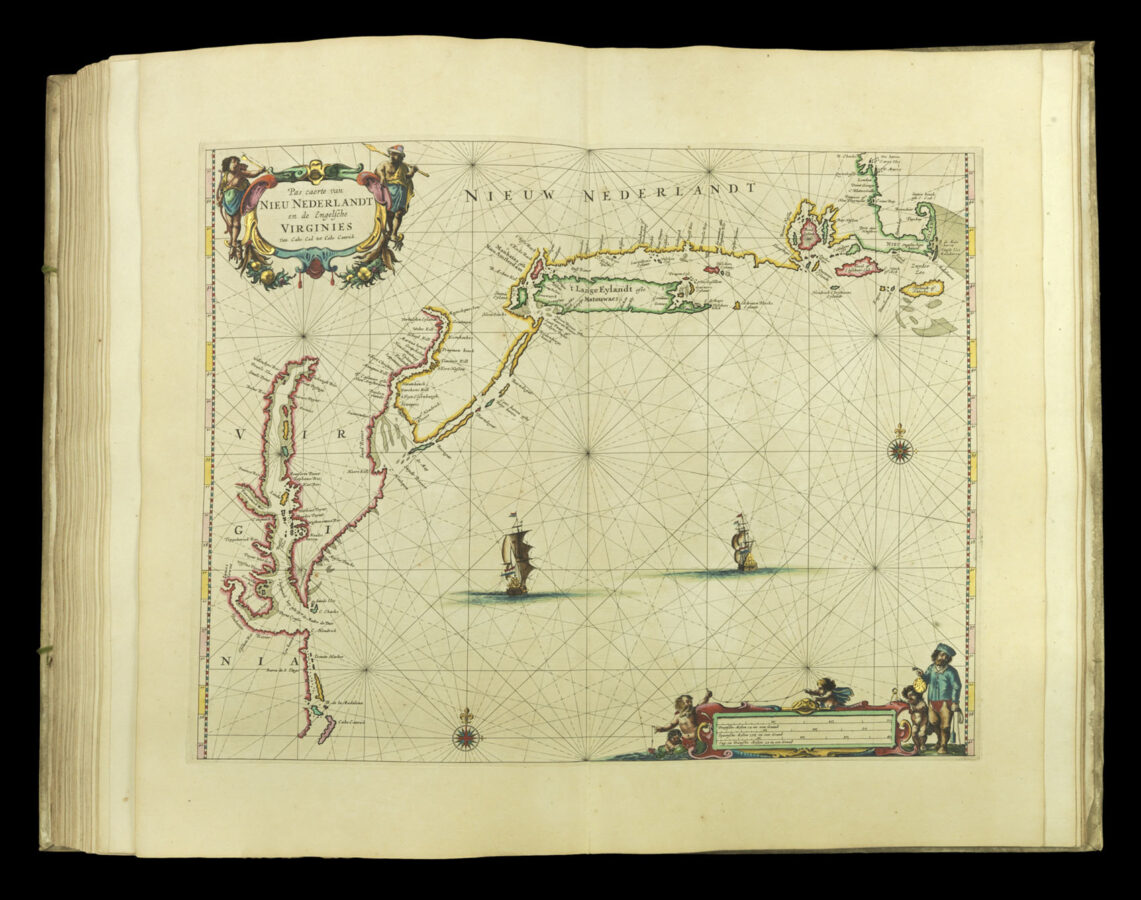 The Atlantic coast of North America

From ​‘Dee Zee Atlas ofte Water-Weereld’, Goos’ chart of the Atlantic coast of North America, focused on the Dutch territories marked Nieuw Nederlandt. New York (then called New Amsterdam) is shown in detail, marked at the end of Manhattan (Manhates). The depiction of the Chesapeake is one of the most accurate of the period, and Jamestown appears on the banks of the ​‘Pouhatan Rivier’, named after the chief of the Powhatan Confederacy before settlers changed it to the James River. The map’s colonial message is reinforced by the Dutch ships sailing towards the shore.

Whether this chart was intended more for pilots or academics was likely a question left deliberately ambiguous. The title page to some example of Goos’ sea atlas state that it is ​“very useful for sailors and pilots, as well as for gentlemen and merchants,” while on other examples, it is reversed: ​“for all gentlemen and merchants, as well for sailors and pilots.“

A trace of Spanish influence is found in the Chesapeake, which is labeled ​‘Cheseapeack oste bar de Madre de Dios’. Jamestown has been Anglicized ​‘to Iames Towne’ from the earlier Dutch charts’ ​‘Iems Toun’. Long Island now marks ​‘Hamton’, and the settlement of New Amsterdam is recorded at the southern end of Manhattan. Brooklyn (‘Breuckelen’), settled thirty years before Goos’ map, also appears.

Pieter Goos (1616–75) was one of the most important of the booksellers in Amsterdam during the second half of the 17th-century. His first pilot book was the Zee-Spiegel, 1650, covering largely European waters. The Zee Atlas covered the whole world. Goos’s atlases and pilots were designed for the armchair traveler rather than as navigational aids: Goos’s prospective clients were ​“Heeren en Kooplieden” (gentleman and merchants) before ​“Schippers en Stuurlieden” (pilots and seamen). This land-based market improved the atlas’ survival rate over others of the period.