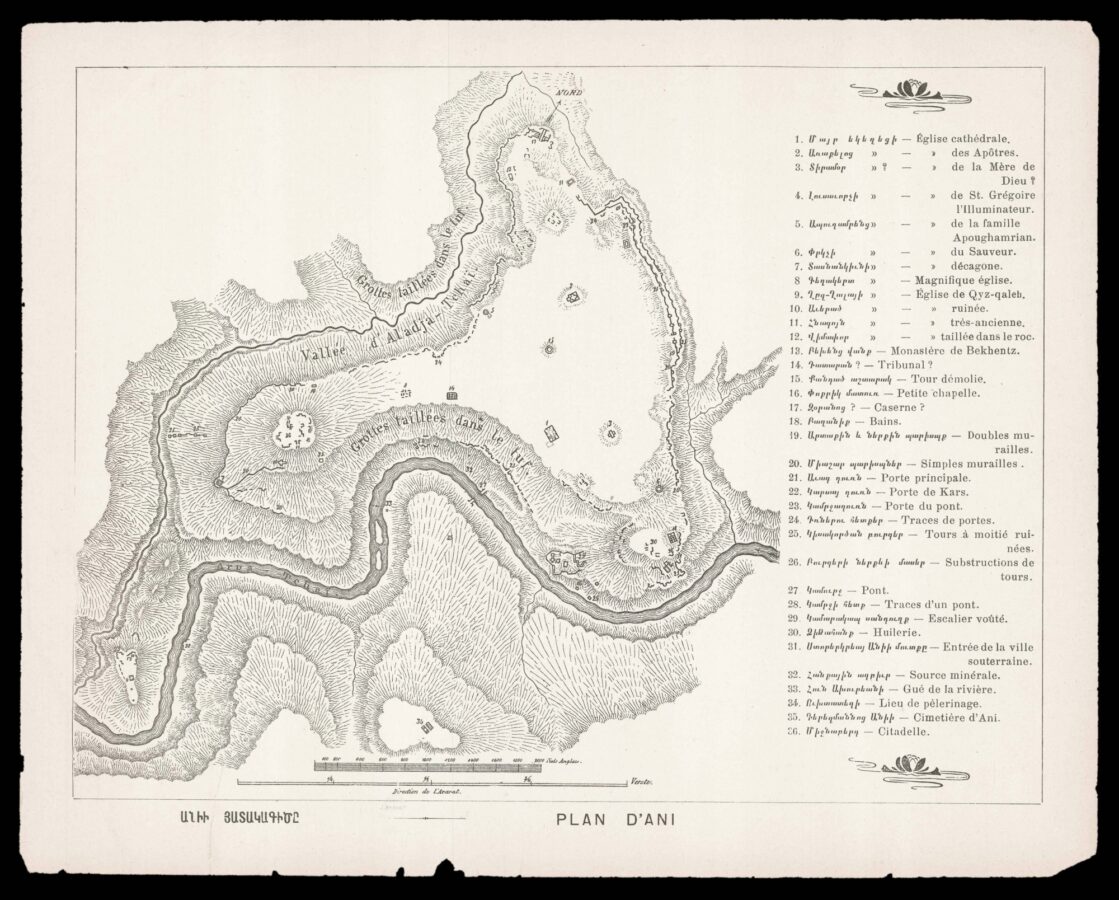 The ancient capital of Armenia

A rare plan of Ani, the ancient capital of Armenia.

Located in the Armenian highlands, on a hilltop across the Akhurian river, Ani was the capital of the Bagratid kingdom between 961 and 1045. It was known as the City of 1001 Churches by virtue of its many religious buildings, which, along with its palaces, fortifications and bridges, were amongst the most advanced structures of the time, both technically and artistically.

An important trading centre, Ani’s early splendour was among the reasons for its decline. The site attracted invasions by the Byzantines, the Seljuks (Turko-Persian Sunni Muslims), and the Shaddadids (Muslim-Kurdish) among others. It was part of the Kingdom of Georgia from 1199, which eventually lost it to the Timurid Empire in the 1380s. In the meantime, the Mongols had sacked the city in 1237 and an earthquake had destroyed most of it in 1319. In 1579, Ani became part of the Ottoman Empire, however only in the form of a small town, which remained populated until the middle of the seventeenth century. By 1735 the area became abandoned when the last monks left the monastery at the church of Eglise de Qyz-qaleh.

Ani became a national heritage symbol of Armenian culture and religion. It was rediscovered in the nineteenth century by European travellers who published their accounts, and by the end of the century, when in Russian hands, the St Petersburg Academy of Sciences started the archaeological excavations as well as emergency repairs. Today Ani is an UNESCO World Heritage Site and lays within Turkey 400 metres from the closed border with Armenia.

The present plan was likely published at the Venetian island monastery of San Lazzaro degli Armeni, home of the congregation of the Mekhitarists since 1717. The publishing house printed both on the island and through a select number of presses in Venice, and it focused on divulging the Armenian culture in Europe. The texts and periodicals covered all subjects, including history, religion and literature, with a two-volume dictionary of classical Armenian its most significant publication. Works published also included translations from European languages, thus the use of French on the present plan is perhaps indicative of its place of publishing.

The plan was drawn under the lead of Marie-Félicité Brosset (1802–1880), a French orientalist who specialised in Georgian and Armenian studies and mainly worked in Russia, and took part to the first scientific surveys and excavations at Ani in late 1848. It was first published in his ​‘Atlas du voyage en Transcaucasie’, St Petersburg, 1851, and later in his ​‘Les ruines d’Ani, St Petersburg, 1860–1861, albeit with a different key, title and border. It is probable that it reached the Mekhitarists sometime in the mid-1850s and they published it separately in a reduced scale, adding the Armenian translation and retaining the measurements in Russian versts.