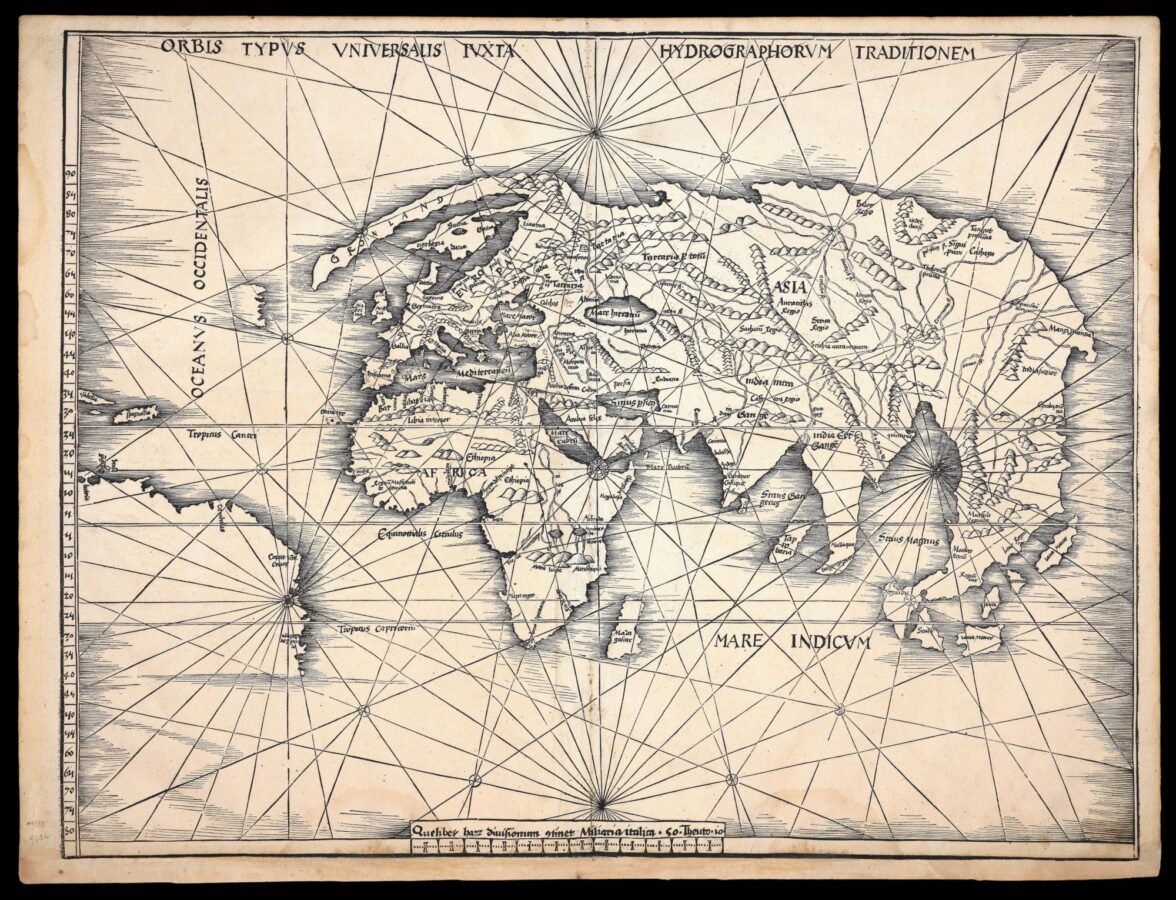 The so-called Admiral’s Map; the first of two maps in Waldseemuller’s atlas that relate New World discoveries, and is referred to in the index as the ​‘Hydrographia sive Charta marina…’, and in the ​‘Ad Lectorem’ as the ​‘Charta Marina’, where it is clearly stated that the geographical facts have been made known ​“through the most authentic voyages of a former Admiral of the most serene King of Portugal, Ferdinand, and those of other explorers” (The Admiral’s Map What Was It? And Who the Admiral? Samuel Mc Coskry Stanton, Isis, Vol. 22, No. 2. (Feb., 1935), pp. 511–515).

The map was created for inclusion in the Strassburg edition of Ptolemy’s ​‘Geographia’, signaling the beginning of the section of twenty modern maps which were added to the twenty-seven Ptolemaic originals. This world map gives a more accurate outline of eastern Asia than Ptolemy. It contains Greenland, which is attached to Europe, but only a tiny section of North America, meant to represent either Newfoundland or Labrador. The coastline of South America is left unfinished, and only five place names are given.

Martin Waldseemüller (1470–1521) was a German scholar and cartographer. He studied under Gregor Reisch at the University of Freiburg, and then moved to Basel in the late 1490s, where he met the printer Johannes Amerbach. In 1506 he moved to Saint-Dié in Lorraine, where Duke René II had established a humanist academy, the Gymnasium Vosagense. There he read about Amerigo Vespucci’s voyage to the Americas, and Portuguese accounts of circumnavigating Africa. Together they proved that the Indian Ocean was not landlocked. He and his colleagues decided to create a map which compared Vespucci’s geographical information with Ptolemy’s, along with an explanation of why they had deviated from Ptolemy’s precepts.

That work, ​‘Cosmographia introductio’, was published in 1507. It contains the first printed instance of the name ​‘America’ being applied to the discoveries over the Atlantic: ​“The fourth part of the earth, we have decided to call Amerige, the land of Amerigo we might even say, or America because it was discovered by Amerigo”. The book was accompanied by a set of small woodcut map gores, the first known printed gores for a terrestrial globe ever made, which showed a landmass meant to represent South America labelled as ​‘America’. The globe gores were a companion to the ​‘Universalis cosmographia’, the great world map in twelve sheets by Waldseemüller. It was unusually large for a woodcut map, and drawn using an adaptation of the second method of projection advocated by Ptolemy. It shows the Americas as one contiguous continent, and was the first map to give this name to the new discoveries.

Waldseemüller himself was reluctant to identify America as a continent, and would never use the name America in any of his later work. When he finally published his edition of Ptolemy in Strasbourg in 1513, he labelled South America ​“Terra Incognita”. However, nearly every significant mapmaker for the next quarter of a century relied on his work, popularising his geography and terminology. 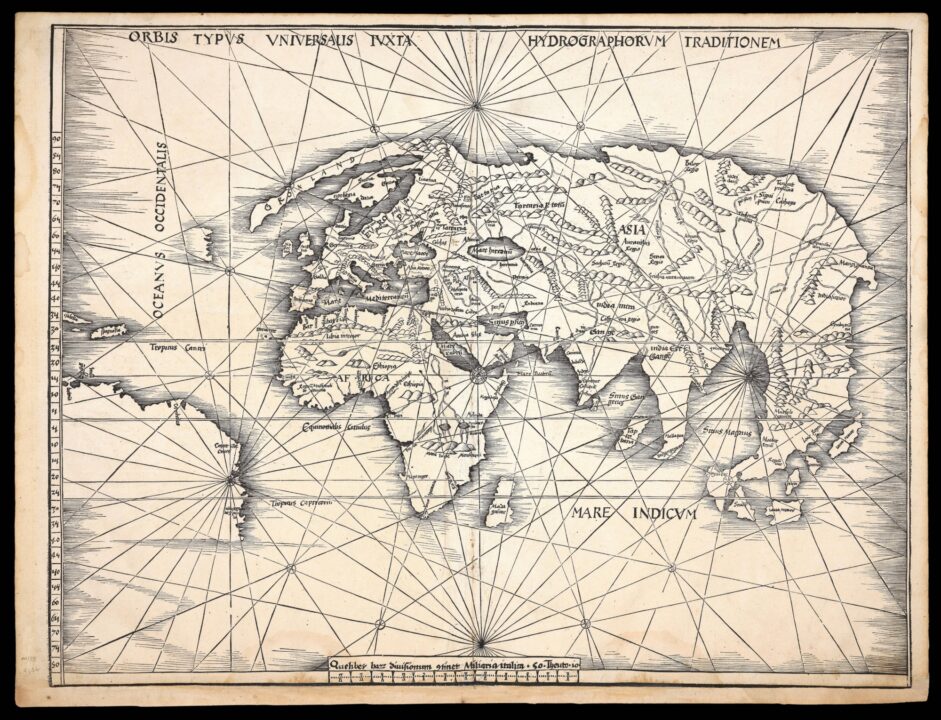