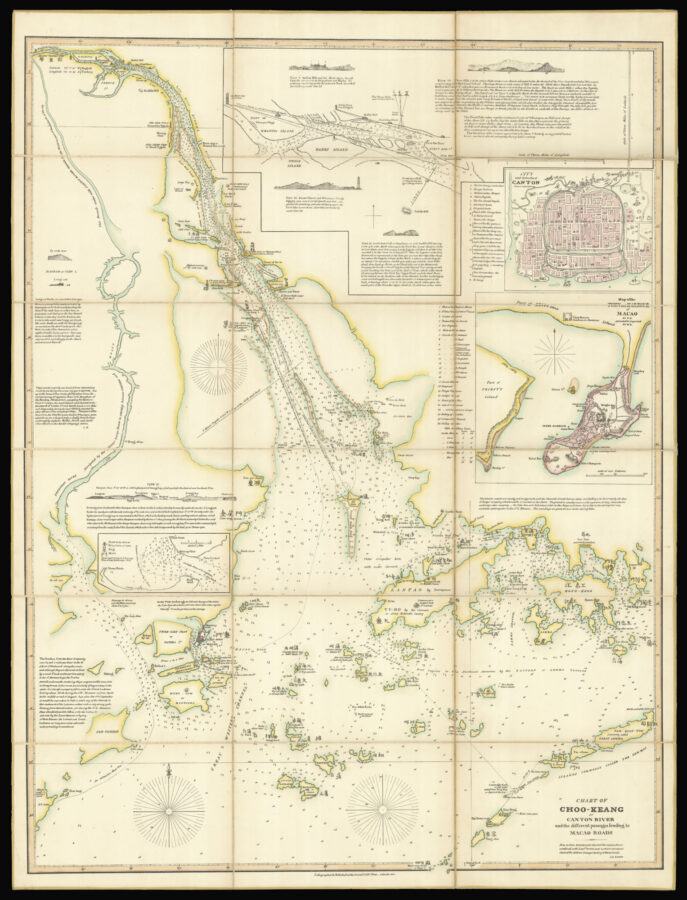 Tassin’s rare chart of the Pearl delta and Hong Kong

The chart stretches north to south from Canton (Guangzhou) to Canzhou Island, and west to east from Dashi Bay to Hong Kong.

As Tassin states in the title he has based his work on two earlier charts:

1. HORSBURGH, James: This Chart of Choo Keang or Canton River, first published in 1831.
2. ROSS, Daniel and MAUGHAN, Philip: Chart of the Different Passages Leading to the Macao Roads. Published in 1810.

These were the two most up-to-date charts of the Pearl River published to date, by the leading hydrographer’s of their day; James Horsburgh (1762–1836) hydrographer to the East India Company, and Captain Daniel Ross (1780–1849), regarded as ​“the Father of the Indian Surveys”, founded the Bombay Geographical Society and led a survey of the coasts of China between 1806 and 1820.

The majority of the chart is based on Horburgh’s work, with much of the Pearl River and entrance taken from the chart. The inset ​‘Plan of the Bay of Kin Sing Moon’, dated 1833, is also taken from Horsburgh’s chart — as it appears on later editions of his work. The area surrounding Hong Kong, however, is from the work of Captain Ross.

Two new additons that do not appear in either Ross or Horsburgh’s work, are the inset plans of Macao and Canton (Guangzhou). The plan of Macao is based on Nicholas Bellin’s 1764 work ​‘corrected and improved by W. B.’. The initials refer to, William Bramstom whose plan of the city was published by James Wyld in 1840. The plan of Canton is based on a wood block that first appeared in 1834, in The Chinese Repository (1832–1851). Published in Canton, it had the distinction of being the first major journal of Sinology. It was based on a well-regarded Chinese map ​“executed,” in the words of the journal’s editor, ​“by a native hand—we dare not say artist.” A key to both plans provides extensive information on both cities.

Jean Baptiste Athanase Tassin (1800–1868) was a leading lithographer, cartographer, and publisher. He worked in his native France, but also in Calcutta and San Francisco during his wide-ranging career. His cartographic career began in Calcutta, when in around 1830 he set up, with the help of Henry Thoby Prinsep, the Oriental Lithographic Press. The press would come to dominate map production in the city for the next ten years. In 1842 Tassin left Calcutta for France, with a fortune of £16,000. He spent most of the 1840s in the France preparing maps for the French military. In the 1850s he moved to San Francisco, producing a map of California in 1851. He would eventually return to France, where he died in 1868.