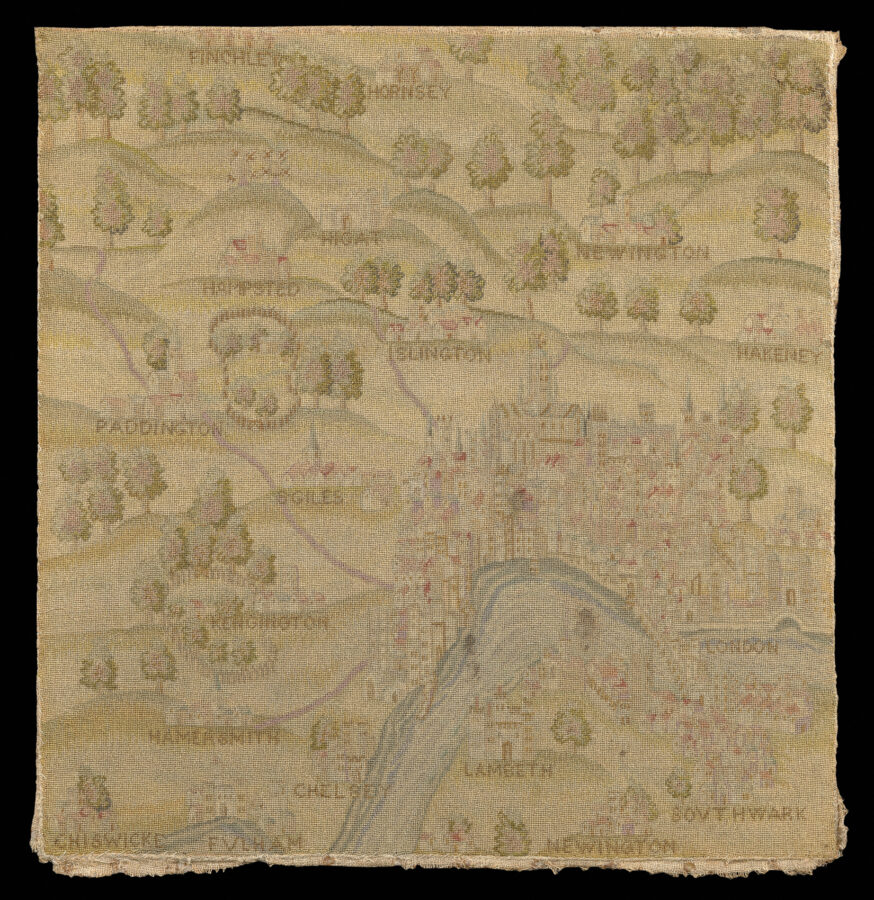 An embroidery fragment depicting London, based upon the Sheldon Tapestries.

This tapestry map of London and its suburbs was hand-embroidered in the early twentieth century, almost 350 years after the design was originally stitched on the important Sheldon Tapestries. In the late 1580s, Ralph Sheldon commissioned an extravagant set of tapestries to decorate his country house, among which were included four embroidered maps of Gloucestershire, Oxfordshire, Warwickshire and Worcestershire, where the family held land. The tapestries were based on the county surveys recently completed by Christopher Saxton, and between them cover a swathe of southern England from the Bristol Channel to London, which appears on the map of Oxfordshire. Scaled up to fit the vast tapestries, the maps were embellished with trees, buildings and more detailed natural features. Not only were they beautiful pieces of art, but would also have been fascinating
novelties at a time where paper maps were rare enough, and a woven map even more so. After passing through numerous hands during the following centuries, the tapestries were eventually exhibited at an exhibition at the Victoria and Albert Museum in 1914, and are now held at the Bodleian Library in Oxford.

Throughout the intervening period, tapestry maps had emerged as a more familiar phenomenon. The eighteenth century Enlightenment had made the study of geography a respectable pursuit, while the growth of the middle class meant that more people had an interest and the means to educate their children. Geographical education for girls often took the form of embroidered maps, which gave them the opportunity to improve both their knowledge and their needlework. It also served as a pass-time for upper-class women, with the Victorian emphasis on philanthropy giving rise to a number of
altruistic embroidery ventures (Cluckie). This practice persisted into the twentieth century, when the present map was embroidered. The fragment is a reproduction of part of Sheldon’s Oxfordshire map, extending from Paddington in the West to Hackney in the East, Finchley in the North to Newington in the South. Although faded, it is possible to discern many of the capital’s landmarks, including the old London Bridge and St Paul’s Cathedral.

After its embroidery in the 1920s, the fragment was later used as part of the rehabilitation process for WW2 soldiers suffering from physical and emotional trauma. The term ​‘art therapy’ is said to have been coined by a British soldier in 1942 (Hogan) and in the aftermath of the Second World War, the US Department of Veterans Affairs made art therapists accessible to their returning troops. Maps embroidered on fabric were used as templates, or ​‘samplers’, from which recovering soldiers were encouraged to draw their own versions. It was believed that this therapeutic activity would help soldiers re-adjust to their lives in England, devoid of the conflict they had experienced abroad. The history of this embroidered map makes it an incredibly rare and interesting piece.