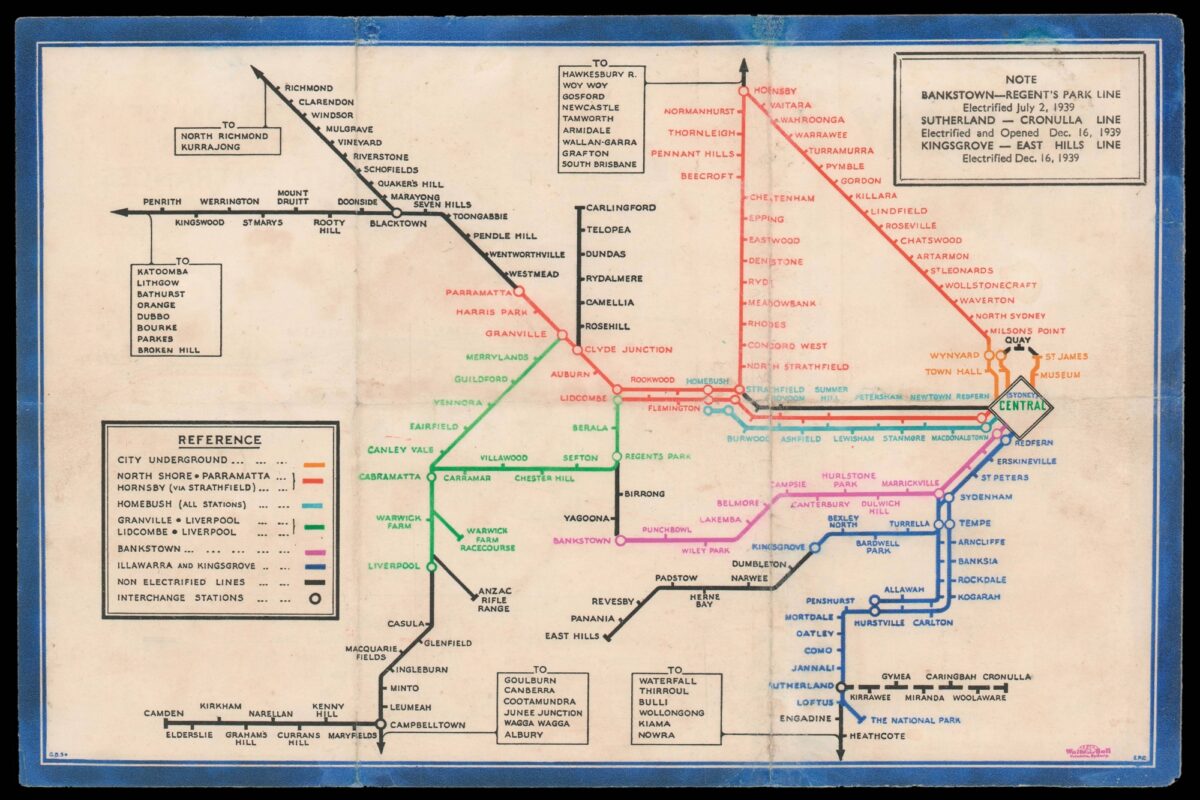 First and only issue, of this early, users guide to the Sydney City Underground Railway. The main map owes a great deal to Harry Beck’s iconic map of the London Underground of 1933, in spite of the fact that there were only four underground stations active at the time. The layout of the brochure also shamelessly borrows London Transport’s general format and unmistakable roundel logo.

​“Brochure No. 1, 1939”, consists of two maps: the larger showing the network of six lines, underground and over, electrified and not; and the other, a much smaller map, showing the ​“Locations of Stations and Entrances” for the City Underground Railway, between Central Sydney and Circular Quay, where the line is shown as still being under construction.

The map follows the design of then 29 year-old engineer Harry Beck closely. Abandoning the restrictions of a geographically correct layout, the map actually constitutes a diagram of the network, showing relationships rather than distances to scale. By using only verticals, horizontals and diagonals, and adopting a clear colour scheme, Beck created a design classic, both easy to use and aesthetically appealing. After the positive public response to the limited trial run issued in 1932, the design was formally adopted for the London Underground in 1933, becoming an essential part of London Transport’s campaign to project itself as a modern, rational and efficient system. The design was copied, by other cities, as here, and remains in use to this day, having become essential to the comprehensibility of complex transport networks all over the world.

The Royal Commission on Communication between Sydney and North Sydney in 1908 and the Royal Commission on City Improvements in 1909, ​“presented the first co-ordinated government strategy for a Sydney transport system, with a Sydney Harbour crossing and an extended railway network at its core. The recommendation for the construction of an underground railway loop through the city was the first time such a plan had been mooted.

In 1911, John Job Crew Bradfield, an engineer in the New South Wales Department of Public Works, put forward plans to the Public Works Committee for a high level bridge and railway connection across the Harbour and an underground rail loop for the city. The Committee approved of Bradfield’s plan and in 1914 he was appointed Chief Engineer, Metropolitan Railway Construction. The following year the government successfully passed the City and Suburban Electric Railway Bill, although the increasing commitment to and associated expense of World War I meant that work ceased in 1916 and legislation for the bridge was not passed until 1922… Although Bradfield had advocated for an elevated railway station at Circular Quay as an integral component of his city loop, costs and the outbreak of World War II meant the completion of his dream was postponed. The tunnels were used during the war however as public air raid shelters at St James (parts of which remain in the disused tunnels at the station) and as secure control centres for the armed forces at the Circular Quay end. Although preliminary planning had begun in 1936, it was not until a new supervisory committee was formed in 1948 that plans were finalised. The station would now include a roadway overhead for a new expressway connection to the Harbour Bridge. The original concept for a solid-wall design station building was also modified to a more open plan with views through at ground level and track level to and from the Harbour. Work began on the viaduct to carry the tracks and the roadway in 1946. The station was finally opened on 20 January 1956, with the first regular service around the completed city loop running two days later” (Mark Dunn, ​‘City Underground’ by Mark Dunn, 2017).
. 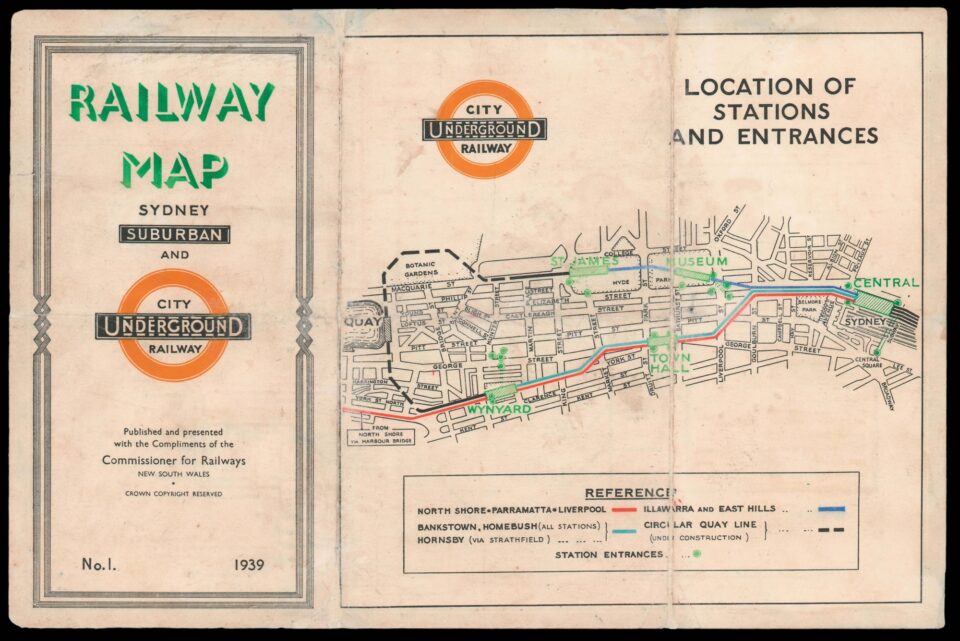