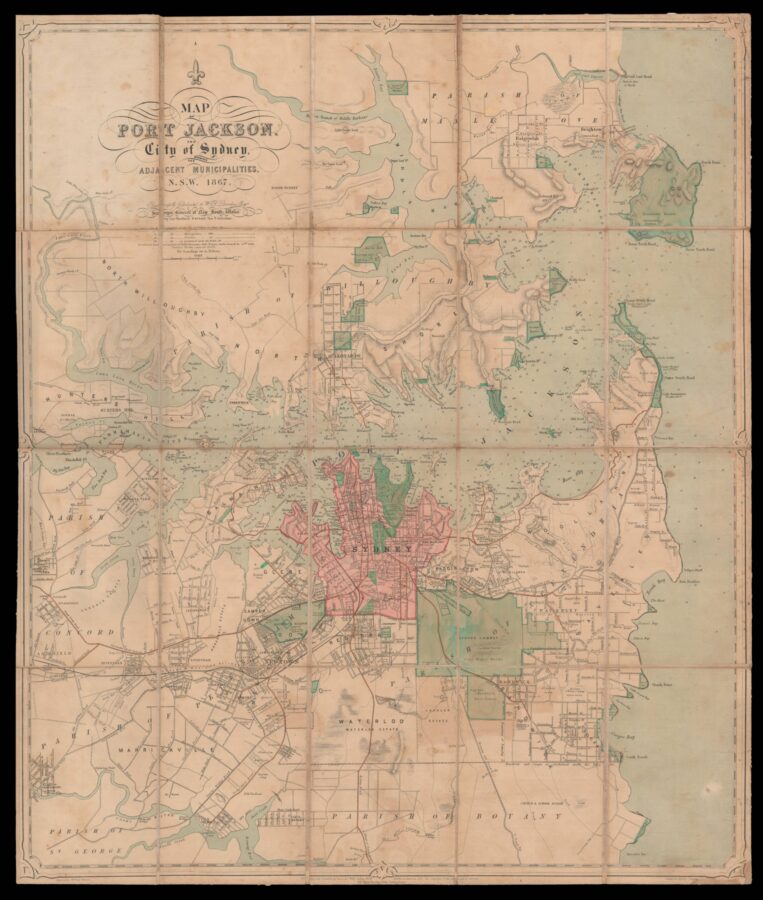 Map of Port Jackson, and City of Sydney shewing the Adjacent Municipalities. N.S.W. 1867

Second state, updated, with the addition of Ferry routes, and other details. First published in 1865. Available coloured and uncoloured, in loose sheets, ​‘Book Form’ [as here], and also available on rollers and varnished, for the office.
A very detailed map, centred on Sydney’s central business district and extending as far as ten miles in three directions: as far north as Curl Curl Head, as far south as northern Botany Bay, and as far west as Ashfield. Willis, who has compiled the map from his own surveys, and others at the New South Wales Surveyor General’s Office, names all streets, important buildings: Government House, Customs House, Exchange, St. Andrew’s Cathedral, St. Mary’s Cathedral, Fort Phillip, the Land & Surveyor General’s Office, Prince of Wales Theatre, Royal Hotel, N.S.W. Bank, General Post Office, The Markets and the Australian Museum; neighbourhoods and land reserves.
Including ​‘Opinions of the Press’ on the front paste-down: ​“A very useful map… it shows at a glance the entire harbor from the Heads to Hunter’s Hill on the Parramatta River, the whole of Middle Harbour, Lane Cover River, and the bays to the southward as far as Five Dock and Figtree Bay. It also illustrates the position of the city with regard to the port, and the various suburbs so clearly, that by its aid a stranger could readily find his way from one place to another, without enquiry” – Sydney Morning Herald.
Willis (fl 1848–1896), painter, draftsman and surveyor, arrived in Sydney, from Devon, in the late 1840s. By 1848, he was apprenticed to Conrad Martens, then and now, one of the colony’s talented artists. In 1853, he had become a surveyor and draftsman for the Surveyor General’s Office of New South Wales. This is his earliest published map: others being: ​‘The County of Bathurst’, 1869; ​‘The Harbour of Port Jackson, New South Wales’, c1870; a ​‘Map of New South Wales’, 1871; and the ​‘Cereal Map of New South Wales’, 1871. He is probably best known for his panoramic view ​‘The Harbour of Port Jackson & city of Sydney drawn from nature…’, 1870. He was a founding member of the NSW Academy of Art, and in 1871 was elected one of its directors.
Rare: only four institutional examples of this state are recorded, all in Australian institutions.

1. With the ink stamp of Berkelouw Booksellers, Sydney, on the front paste-down;
2. From the library of Geoffrey Chapman Ingleton (1908–1998), writer, illustrator, and renowned collector of maps and charts of Australia, with his library mark (no. 10392) on verso. Having served in the Royal Australian Navy from 1922–1936, Ingleton worked as a draftsman for the Australian Hydrographic Office, from 1940–1973. His collection was sold at auction in 1991 and 1992.