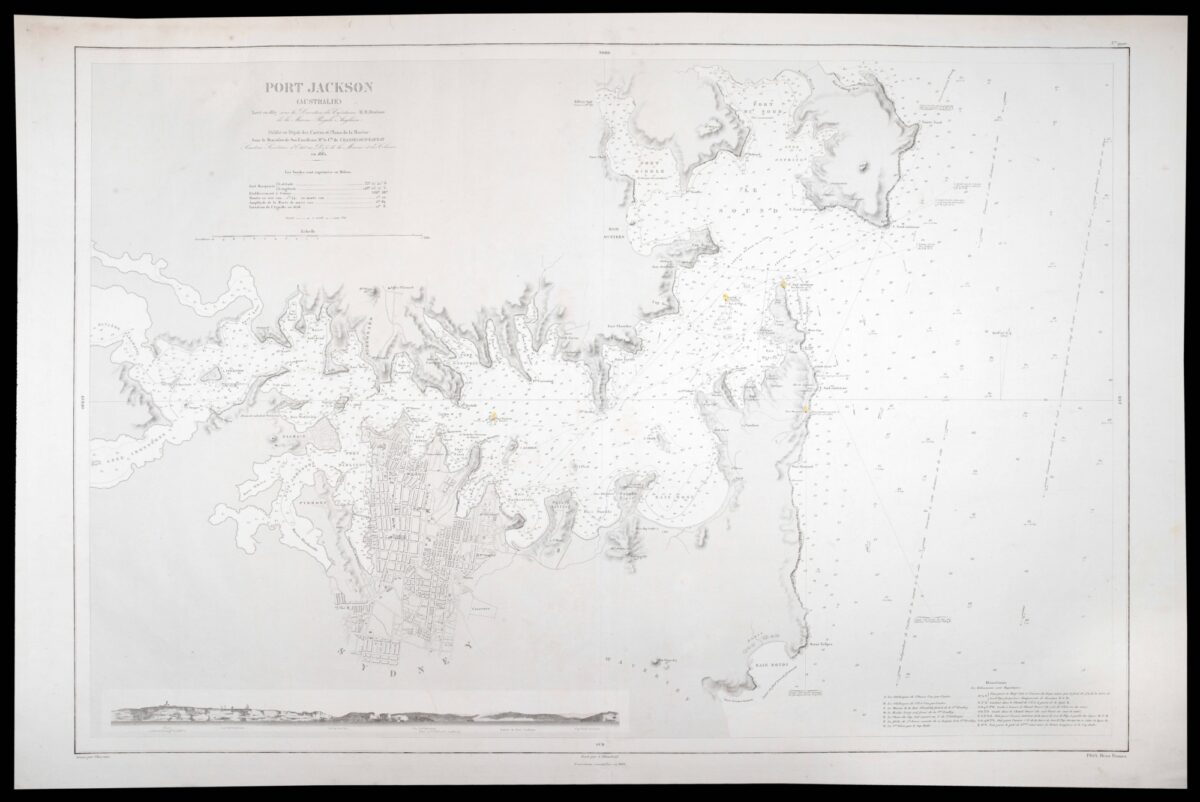 Sydney Harbour during the Gold Rush

Large scale and detailed chart of Port Jackson, showing the city of Sydney, and all of Sydney Harbour, from about one and a half miles out to sea, as far south as Bondi Beach, as far north as Cabbage Tree Bay, and west to beyond Cockatoo Island, to Parramatta and Ironstone. A coastal view runs along the bottom edge of the map, showing the entrance to the harbor from just beyond the Heads. The directions of the currents, and soundings are given throughout. Published by the Depot de la Marine, based on a British Admiralty survey of 1857, with corrections, probably after Willis’ map of 1867.

The earliest chart, of Sydney Harbour was published in 1791, based on a survey carried out within a few weeks of first European settlement in January of 1788. The survey by Lieutenants John Hunter and William Bradley, which extended from the Harbour entrance to ​‘The Flats’, now Homebush Bay, took only 9 days to complete.
The second survey was completed by John Septimus Roe, the assistant surveyor to hydrographer Phillip Parker King from 1818 to 1822. King had been commissioned to survey the Australian coast based on the findings of Mathew Flinders in his circumnavigation. Although King and Roe conducted most of their survey in the western and north-western coast of Australia, they used Sydney as one of his bases. Roe surveyed Sydney Harbour himself, as far west as The Flats and beyond in 1822, but also borrowed from the discoveries of Hunter and Bradley, and also from Freycinet’s survey of 1802.

​“With the discovery of gold in the 1850s and the need to protect the gold shipments, the Royal Navy began to take a greater interest in New South Wales and in 1859 established a new Australian Station, a naval command, separate from the East Indies Station, responsible for waters around Australia. It was initially under the command of a Commodore but upgraded in 1884 to be commanded by a Rear Admiral. This greater naval involvement may explain the more detailed hydrographic surveys which began from about this time. The 1857 British Admiralty survey was carried out by Hutchison et al (1859).

​“It was under the direction of a Captain Henry Mangles Denham F.R.S. who had been tasked with surveying parts of the south-west Pacific in HMS Herald. The chart of this survey, engraved in 1859, had the high soundings density one would expect with a modern hydrographic survey and it clearly marks a significant departure from earlier mapping efforts of Sydney Harbour. The area covered was from 1.5 miles seawards of the harbour entrance, west to Five Dock Bay. However, sounding densities were relatively sparse west of Cockatoo Island, where a new dry dock, Fitzroy Dry Dock, was opened in late 1857. A long baseline, 2780 feet long was laid out at Rose Bay, from which a triangulation scheme was set up to cover all the harbour as far west as Cockatoo Island. Check baselines were set up at Manly Beach, north of the harbour entrance, Darling Point and South Head. The survey and initial chart production took approximately two months” (Phil Mulhearn ​‘The 18th and 19th Century Charting of Sydney Harbour / Port Jackson, 2014).