An Actual Survey of the County of Sussex Divided, into Rapes, Hundreds and Deanryes, In which the Exact Longitude and Latitude of all the Remarkable Places are Determin’d from Observation. Also An Accurate Delineation By Admeasurement of The Sea-coast, Roads, and the Rivers so far as Navigable etc. By Rich Budgen 1724.

One of the outstanding county surveys of the early eighteenth century, an important and influential period in English regional cartography, despite the criticism of the noted antiquarian Richard Gough, who censured the map as ​“either correct nor well executed”. This however was in 1780 and Yeakell and Gardner had just announced their ​“Proposals” for their ​“Great Survey” under the patronage of the influential Duke of Richmond which may well have influenced Gough’s view. In spite of its shortcomings the map was a landmark in Sussex history, the first in the county to be oriented to true north and to indicate magnetic variation, the first to have parallels and meridians drawn across the map, the first to rely solely on the statute mile of 1760 yards, after Ogilby’s survey of 1675, and the first to show the towns ichnographically. It was engraved on six sheets of different sizes, three full sheets being used for the map with three half-sheets being used for the decorative detail. The latter comprises the title cartouche, the dedication cartouche, prospects of Lewes and Chichester with their ichnography, and the coats-of-arms of sixteen of the local nobility. There are 148 subscribers’ arms which in most cases are keyed by map reference to their residences. The map was designed specifically for the landed gentry and their commercial interests and this was reflected in the ​“Explanation” where the diagrammatic detail included market towns, villages and farms, manor houses and gentlemen’s seats, castles, ruins and camps, woodland, commons, marshland and heaths, forges, furnaces and stone quarries, rocks, mineral waters and sands and the boundaries of the county, rapes, deaneries and hundreds. Of particular interest were signs indicating those parts abundant with timber and an indication of the navigable distance of a river whilst mileages are indicated along both roads and rivers.

The actual survey took longer to reach completion than originally anticipated. A broadside pasted to the bottom corner of an unfinished proof of the eastern sheet in the British Library dated Jan 10th 1722 informs us that ​“Whereas it was proposed to deliver the map to subscribers by Christmas 1721, but the Spring and beginning of the Summer proving very wet and Roads thereby impassable for the Wheel. If the coming Spring proves tolerably fair the survey may be completed by midsummer next and some of the Plates engrav’d; of which Proofs may be printed, and sent to the Principal Towns of the County that Gentlemen may have an opportunity of examining them etc. before they are filled with various Particulars.” The survey must have progressed satisfactorily hereon as an advertisement on May 23rd 1723 in the Weekly Journal announced that ​“Mr. Budgen’s map of Sussex being now finished the subscribers who are to have their arms engraved thereon are desired to send them to Bernard Lintot, Bookseller…that the said map may be published immediately”. The 143 subscribers must have been slow to respond as the request was repeated in a further advertisement on Dec. 21st. There is only one known example of the map in this first state with 143 armorials, surprisingly with the imprint of John Senex, and it may be that this is a proof impression.

When the map re-appeared it was under the imprint of Bernard Lintot’s son, Henry. There were five more coats-of-arms, and, amongst other minor additions, the date 1724 was added to the end of the title. Even so there were still twelve blank shields whilst many of the others lacked a map reference, possibly reflecting their owner’s tardiness in forwarding a subscription. Bernard Lintot, who shared the same address as John Senex, did not advertise the map until some years later — it may be that this edition was not published until after 1730. There was a further edition published by J. Sprange in 1779 but it remains one of the scarcest and most appealing of the early county surveys. 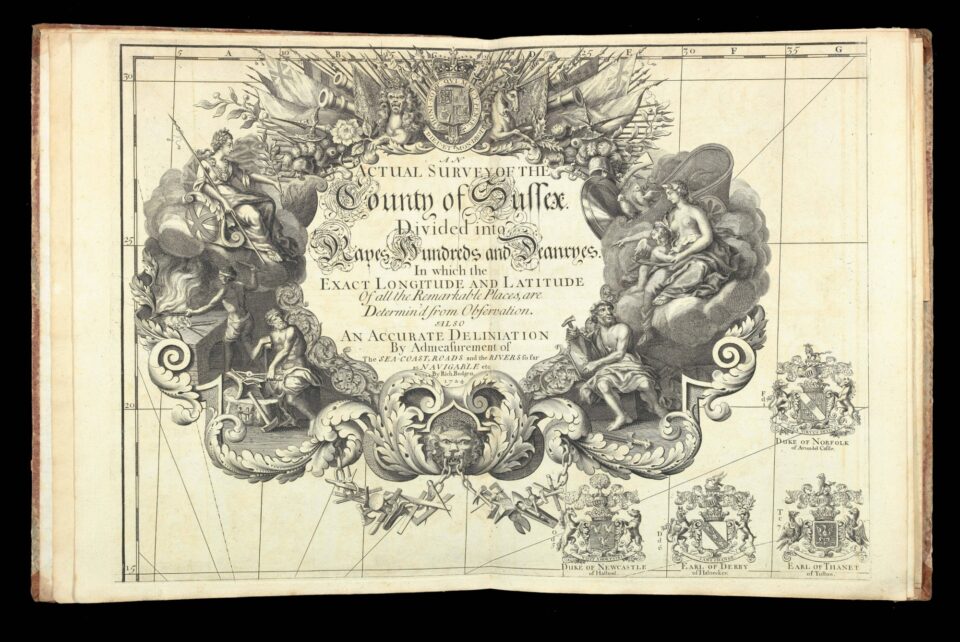 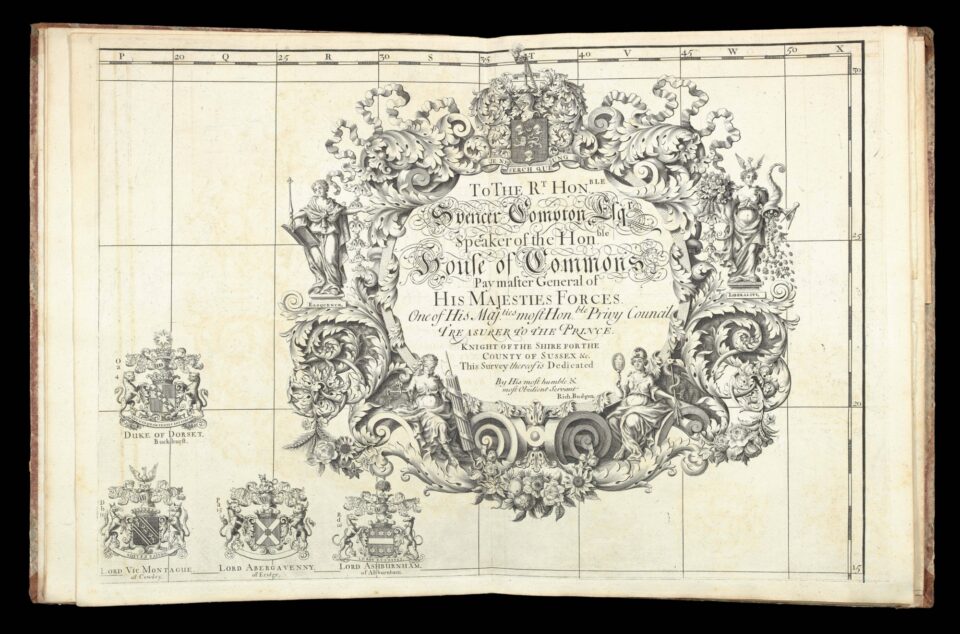 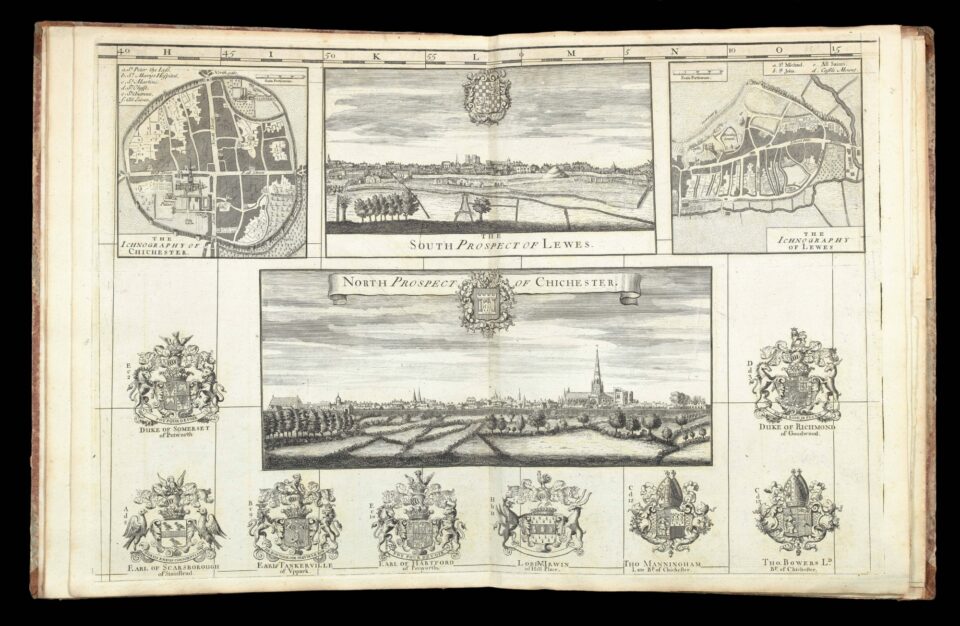