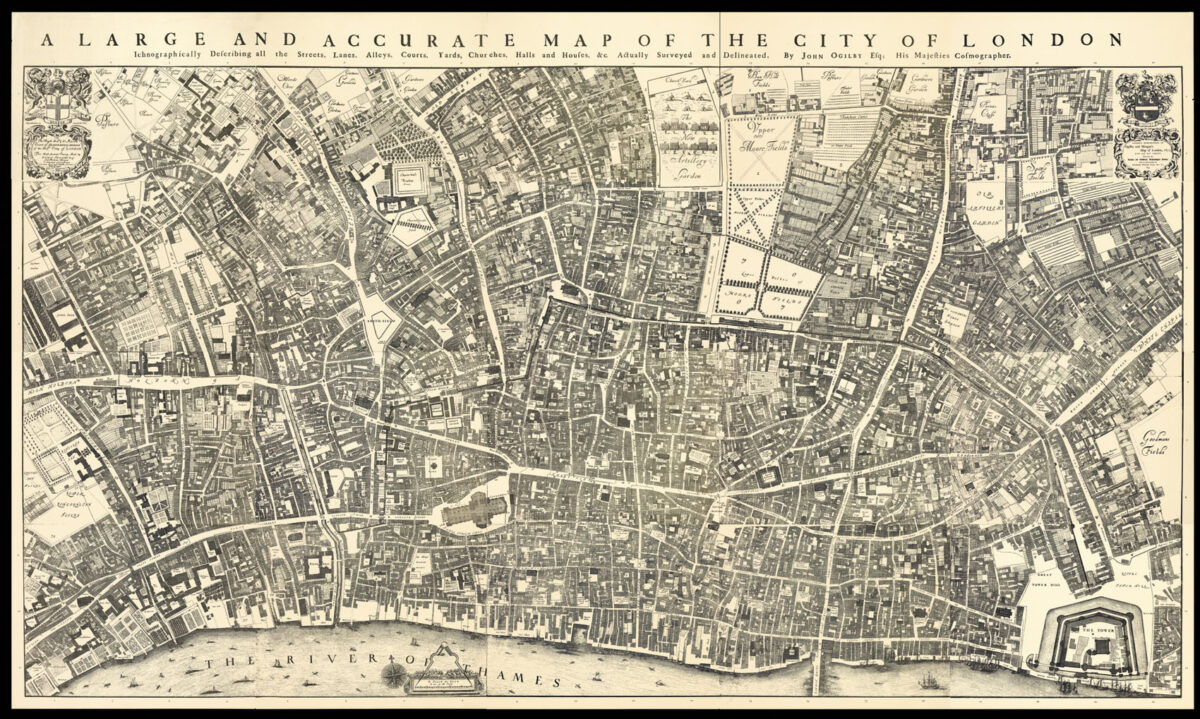 Superb facsimile of ​“The first accurate and detailed map of London”

A New and Accurate Map of the City of London distinct from Westminster and Southwark, Ichnographically Describin[g] all the Streets, Lanes, Alleys, Courts, Yards, Churches, Halls, Houses, &c. At the Scale of an Hundred Foot in an inch. Actually Survey’d and Delineated by John Ogilby Esq; and William Morgan, Gent. His Majesty’s Cosmographers.

In 1666, London was almost twice the size it had been at the moment of James I’s accession, with much of the new development to the West of the City’s boundaries. This left the City itself as a stinking, dark maze of streets, courtyards and alleys between the churches. It was this structure that the Great Fire cleared away in 1666. There was a requirement to rebuild the City in such a manner as to render another Great Fire impossible. Within a few days of the fire, three plans were presented to the king for the rebuilding of the city; those of Christopher Wren, John Evelyn and Robert Hooke, in the end, none of these plans was implemented, and the rebuilt city generally followed the pattern of the old one, much of which survives to the present day, but when the Corporation of London’s proposals came before Charles II in Council in 1667, they were returned with orders to plot the proposed streets on a map so that the King might better be able to judge their breadth and give directions accordingly.

After the Great Fire, John Ogilby claimed, probably with some exaggeration, that he lost his entire stock of books valued at £3,000, as well as his shop and house, leaving him worth just £5. As he sought to restore his fortunes, Ogilby looked in new directions, and saw opportunity in the reconstruction of London’s burnt-out centre. He secured appointment as a ​“sworn viewer”, whose duty was to establish the property boundaries as they existed before the Fire. In this, Ogilby was assisted in the project by his step-grandson, William Morgan, and by a number of professional surveyors.

The result, whilst not printed until one month after Ogilby’s death, was the present outstanding plan of London, on a scale of 100 feet to an inch.

​“This is the first accurate and detailed map of London, with all the buildings represented in plan rather than as bird’s eye views” (British Library Catalogue of the Crace Collection)

The plan was not Ogilby and Morgan’s alone: Wenceslaus Hollar was responsible for a great deal of the engraving, and Gregory King, under direction of Ogilby, appears to have engraved large portions also.

The attribution to Hollar comes in part from a letter by George Vertue to Dr Ducarel, dated 1 September 1749: ​“Kind Sir, The same day I received your letter… The Plan of London and other workmen, went by the name of Ogilby’s Plan of London; and after I published Hollar’s works, I found it to be some part done by him; but nowhere on it his name or mark, therefore it has been omitted…“

Gregory King went to London in 1672 and met Hollar who recommended him to Ogilby ​“to manage his undertakings”. King says he etched some plates for Ogilby and he claims to have been responsible for the scale and design of the 20-plate map of London which was ​“etched in copper by Mr Hollar” (King’s autobiographical notes printed in Dallaway).

Robert Hooke was also heavily involved in the production, and makes numerous references to it in his diary. Indeed, read together, Hooke’s diary entries give a vivid insight into the stages and timetable involved in preparing a large-scale survey and map:

The ​‘Term Catalogues’ for 22 November 1676 record that ​“The Survey of London nine feet long and six feet deep is to be sold by Will. Morgan his Majesty’s Cosmographer at his house in White Friers. £1.5.0 in sheets. Also to be published at a less scale a map of London Westminster & Southwark actually surveyed; and as counterfeits have been made these will be known by the names of John Ogilby & William Morgan, with a scale to warrant them”.

Robert Hooke evidently bought his copy at a discounted price and somewhat later: his diary on 14 Feb 1677 reads ​“Ogylbys map from Morgan. Gave his man 5sh”.

Hooke was not the only diarist to make mention of the map:

​“Up, and to the office, where we sat all the morning, and my Lord Bruncker did show me Hollar’s new print of the city, with a pretty representation of that part which is burnt, very fine indeed; and tells me that he was yesterday sworn the King’s servant, and that the King hath commanded him to go on with his great map of the city, which he was upon before the city was burned, like Gombout of Paris, which I am glad of” (Samuel Pepys’ Diary 22 November 1666)

In 1677 Morgan issued a printed pamphlet to accompany the map ​“London Survey’d: or, an explanation of the large map of London”, of which there is an unique example in the British Library.

The map was re-engraved later, undated, and with the new title: ​“A Large and Accurate Map of the City of London Ichnographically Describing all the Streets, Lanes, Alleys, Courts, Yards, Churches, Halls and Houses, &c. Actually Surveyed and Delineated, by John Ogilby Eq; His Majesty’s Cosmographer.“

The Ogilby and Morgan plan represents very nearly the first linear ground plan or ​‘plot’ of any British town. It was certainly the first large, multi-sheet plan of a British town to be so delineated. It depicts a London recovering from disaster, and is refreshingly frank in its assessment of the capital; prisons and working-class areas feature on the same scale as palaces and grand avenues (the same cannot be said of Morgan’s later, 1682, plan of the city: a grand heavily decorated engraving devoid of poverty and places of incarceration). The part-built and planned edifaces on the 1676 survey signify a level of hope and optimism, and the London that emerges from the ashes of the great fire, whilst familiar, has a new shape:

Fleet Street, the route from Temple Bar to St Paul’s, divides the plan horizontally, and it is bisected north to south by the New Canal, with quays, 30ft wide, on either side of the now navigable Fleet River.

Although plans such as Evelyn’s and Wren’s were impracticable, the old layout of streets is much improved. Thames street is straighter and wider, Ludgate from St Bride’s to St Paul’s is mow 40ft across, even lanes and alleys are at least 14ft wide: enough for two drays to pass.

The Duke’s Theatre, attributed to Wren, is shown on the waterfront.

The Tudor palace of Bridewell, now a prison, hospital and school, looms large over the New Canal, while further north is Fleet Prison where debtors – among them the playwright Wycherley – are held. Many sizeable gaps are yet to be filled and one, marked ​“The King’s Wardrobe was here,” is a reminder of the pre-fire storehouse for royal robes, now removed to The Savoy.

The most impressive building is the new Royal Exchange, larger than before and with more shops, completed in 1671, the same year in which the Guildhall is sufficiently repaired to host the Lord Mayor’s Banquet again.

Of the 84 churches destroyed by the fire, 30 are now restored or well under construction, with Wren deciding which shall be saved, and which lost, and which parishes united.

New markets, such as Honey Lane, were designed in order to remove traders from Cheapside, and into large spaces to prevent them clogging up the roads: the Wool Church Market in the southeast for vegetables, and Newgate market between Newgate and Paternoster Row, are two examples visble on the map.