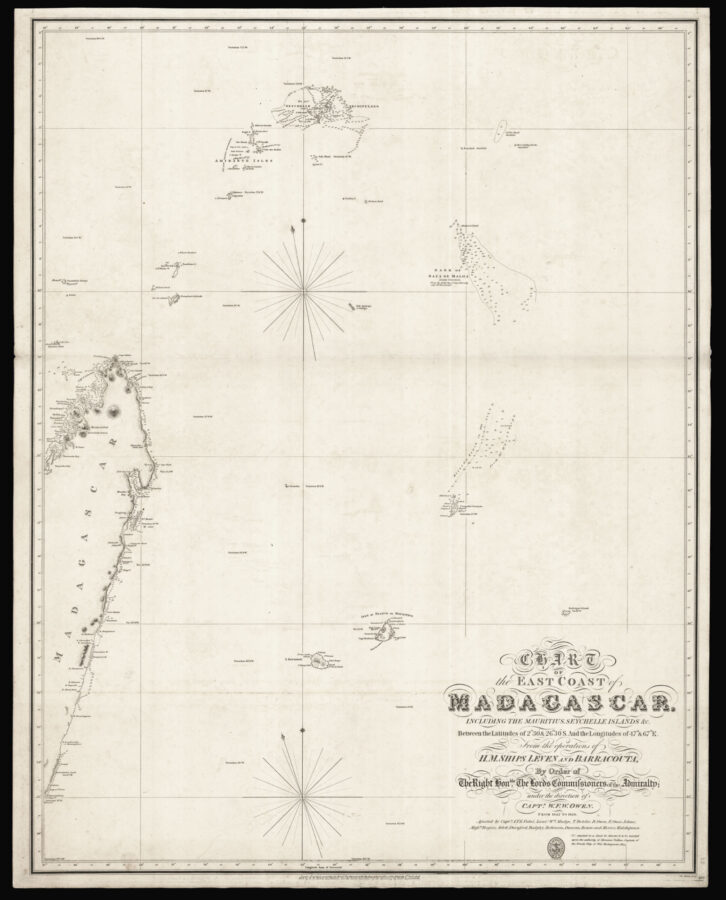 Chart of the East Coast of Madagascar including the Mauritius, Seychelle Islands &c. Between the Latitudes of 2°30 & 26°30’S. And the Longitudes of 47° & 67°E. From the operations of H.M.Ships Leven and Barracouta, By order of the Right Honble. The Lords Commissioners of the Admiralty; under the directions of Captn. W.F.W. Owen. From 1822 to 1826. Assisted by Captnb. A.T.E. Vidal, Lieuts. Wm. Mudge, T. Boteler, R. Owen, E. Owen Johnes, Messrs, Rogier, Arlett, Durnford, Badgley, Robinson,. Duncan, Bowen and Mercer. Midshipmen.

This first edition of Captain Owen’s chart of the east coast of Madagascar presents the results of his five-year expedition to Africa. In 1821, William Fitzwilliam Owen was commissioned to undertake this voyage as captain of the Royal Navy ships Leven and Barracouta, and to survey the east coast from the Cape of Good Hope to Cape Guardafui. Included in this was the task of ​“examining and observing the true position of the numerous islands and shoals between Madagascar and the main and north and north-eastward of Madagascar, and also such parts of the coast of Madagascar as you may conceive not to have been accurately ascertained”. Over the following five years, Owen and his crews mapped 30,000 miles of coastline, covering vast stretches of the African mainland as well as the surrounding islands. During the expedition, the captain kept a diary, which he later published as a two-volume account of his journeys in 1833. This work records the day-to-day activities aboard a hydrographic surveying vessel and contains anecdotes about his experiences with the Madagascan natives. One involves several of his men deserting the Leven after being led astray by an indigenous tribesman. Owen is resolved, however, to the fact that ​“it is always better to part with those who are discontented, when it can be done safely”. Two of his midshipmen were later to be murdered by another native, and Owen also notes the devastating effect of dysentery on both his ships.

Some of the more cheerful chapters recall a Christmas spent at the French settlement of St. Mary’s, shown here in the middle of the East Coast, and records that three children were born on the Leven. Owen even took custody over one of these infants after both its father and mother died, perhaps because he himself had been orphaned at a young age. After the 1807 Abolition of the Slave Trade Act, Britain had dedicated itself to enforcing the elimination of slavery across its empire. During the early 1820s, officers from the Royal Navy were charged with making treaties to ensure this happened, and Owen was engaged in negotiations with King Radama of Madagascar for this purpose. In 1825, the Leven arrested and seized the French slave ship Soleil at St. Augustin’s Bay, and found 152 slaves on board, six of whom had died. Although a surviving certificate sent from the Collector of Customs at the Mauritius Vice Admiralty to Captain Owen confirms that he would be entitled to ten pounds per slave, there is no evidence that Owen ever claimed this bounty. Upon publication, Owen’s action-packed narrative proved popular among Britons eager to hear about his adventures, and it subsequently ran to several editions. Likewise, his charts were also a success, and continued to be used by both the British navy and by private purchasers for the following century, with later versions updated with more detailed inset maps.

We are unaware of any examples of the first edition appearing on the market in the last 50 years.