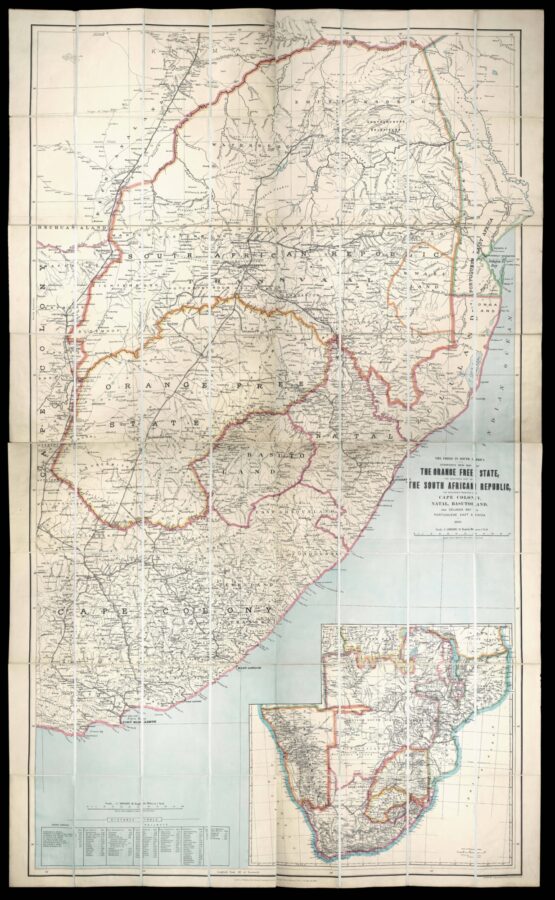 First issued in 1899, sometimes issued as two separate maps: of the Orange Free State; and the Southern Part of the South African Republic. With an inset of the southern tip of South Africa lower right and a table of distances lower left.

The South African War, also called the Boer War, the Second Boer War, or the Anglo-Boer War, was fought between Great Britain and the two Boer (Afrikaner) republics—the South African Republic (Transvaal) and the Orange Free State— between October 1899 and May 1902, resulting in British victory.

Edward Stanford (1827–1904), map maker and publisher, began his career in earnest when in 1853 he purchased his employer Trelawney Saunders’ business, selling maps and charts in a stationer’s shop at 6 Charing Cross. Stanford became sole proprietor and expanded his shop to 7 and 8 Charing Cross whilst acquiring premises on Trinity Place for a printing works. ​“This bold move solidified Stanfords as the largest, and indeed only map maker and seller in London at a time when British colonialism, the rise of the railways and the continuing popularity of the Grand Tour, meant demand for readily accessible, high quality cartography was building at remarkable pace.” (Stanford’s online). The company moved to their iconic London address in Longacre in 1873.