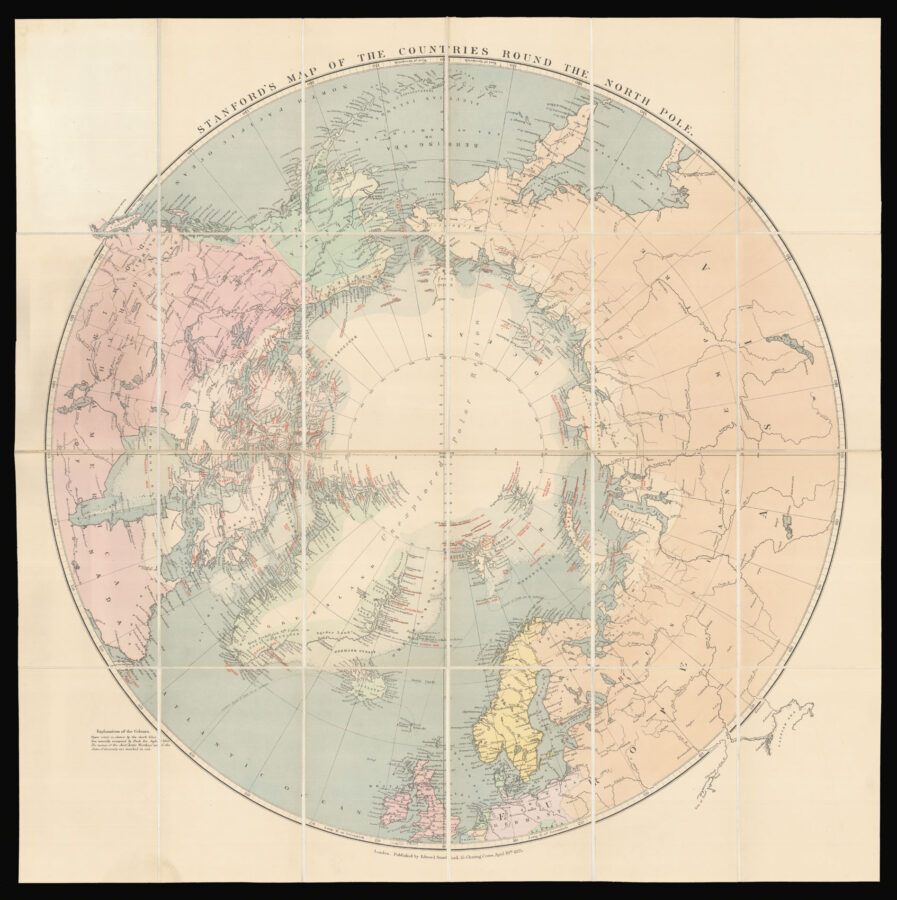 Stanford’s map of the Arctic

Map of the Countries round the North Pole.

The present map of the Arctic regions was first issued in 1818 by Aaron Arrowsmith, most likely in response to William Parry’s discoveries in the region. Aaron Arrowsmith’s son John would continue to update and reissue the map up until 1859 — no later editions are recorded, most probably due to the fact that in 1861 Arrowsmith went into semi-retirement. Following Arrowsmith’s death, in 1874, Edward Stanford acquired the plate and continued to issue the map until the 1930s.

The present example dates from 1875, and represents the earliest issue of the map under Stanford’s name. The map depicts all the voyages of discovery in the Arctic, from John Cabot’s (1497), and Hudson (1607), to the Austro-Hungarian voyage of Weyprecht and Payer (1872–1874). All the voyages are marked with a name and date in red, although the only track highlighted is that of John Franklin. Other additions made by Stanford include the marking of the full extent of the polar ice sheet, and pack ice, together with a dotted line denoting the ​“Southern limit of Drift Ice or Icebergs”.

Edward Stanford (1827–1904) was a well known British mapmaker, publisher and Fellow of the Royal Geographical Society. As a result of his involvement in the Society as well as the India Office he gained a reputation as a publisher of explorers.

After starting his own business Stanford became known for his ​“library maps”, particularly those of Africa and Asia. Aside of launching his own maps, he enlargened his stock by buying plates of other publishers. In 1874 he did, for example, acquire the plates and stock of John Arrowsmith, heir of the Arrowsmith family firm. After his death in 1904 the business was continued by his son Edward Jr.