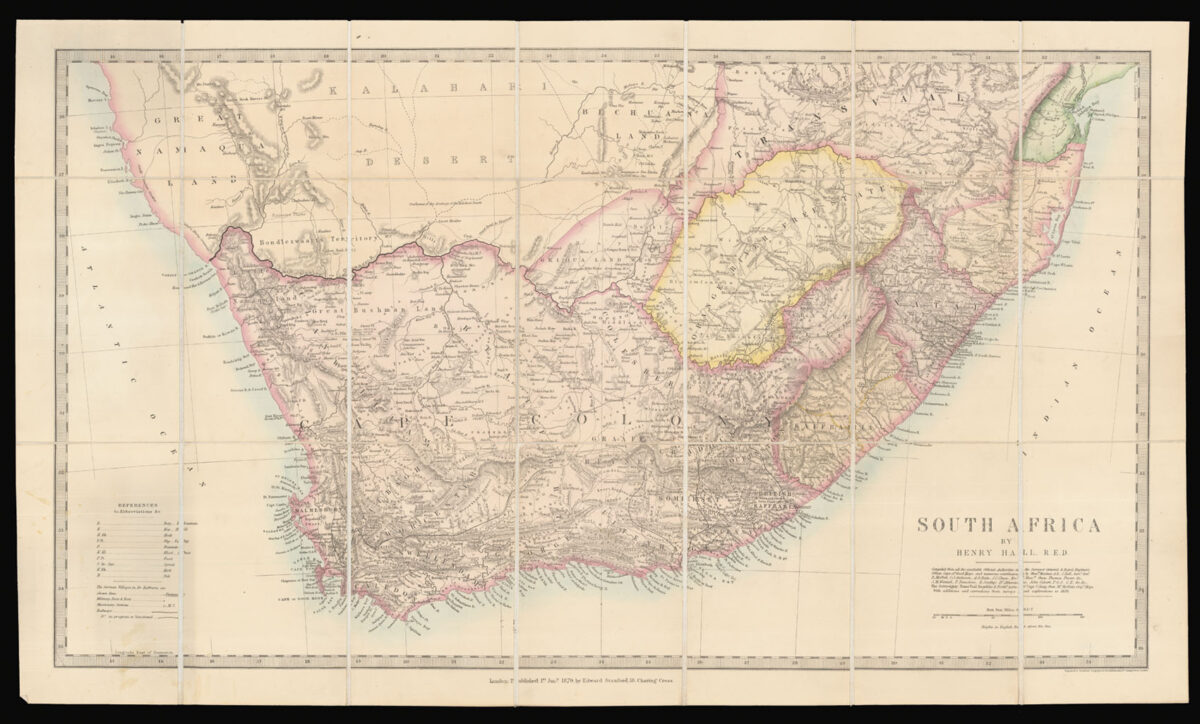 An important map of southern Africa, showing the various colonial divisions. It is dominated by the Cape Colony, the main British colony, but shows the complicated, constantly changing patchwork of free states, colonies and possessions making up the lower half of the continent. The area marked as Kaffraria, for instance, was Xhosa territory beyond the Kei River; British Kaffraria was a neighbouring region which had Xhosa inhabitants but had been a colony until 1866, when it was sublimated into the neighbouring Cape Colony. The Orange River Free State was a Dutch independent sovereign republic; neighbouring Basutoland (modern Lesotho) went from a kingdom resisting the Boers of the Free State, to a British suzerainty, to being annexed by the Cape Colony, to returning to Crown rule, in the space of 16 years.

Henry Hall (1815–1882) was a British military engineer and cartographer. After serving with the Royal Engineers in the Cape Colony during two of the Frontier Wars, he returned to live there in 1860.

When Britain took control of the Cape in 1795 they had no access to previous Dutch mapping of the area. The Surveyor-General of the Cape complained in 1836 that no proper survey had ever been made, and they were reliant on the local maps made by explorers and travellers. Local military surveys helped, but as the settlement boundaries were constantly changing — nine Frontier Wars were fought between settlers and Xhosa tribes over the nineteenth century — these were of limited use. Hall spent time compiling a database of information and maps from other reliable sources in addition to his own work, which are listed underneath the title. He produced three maps of South Africa published by Stanford: one of the entire African region south of 16°S; one of Africa south of 25° 30’S (the present example); and a map of ​‘South Eastern Africa from Algoa to Delagoa Bay’. The result surpassed earlier efforts by James Wyld and John Arrowsmith, and was, in Hall’s words, the first ​“tolerably correct” map of South Africa. Greater accuracy would not be possible without the completion of a full geodetic survey, which did not begin until 1883, a year after Hall’s death.

Interestingly for a colonial cartographer, Hall was keen that European toponymy did not supplant native place names. Local Khoikhoi names were lost with the influx of Dutch and English settlers, and Hall expressed regret that so many ​“aboriginal names” were lost, and preserved them where possible, even if that meant a ​“strange jumble” of English, Dutch and Khoikhoi on his maps (Hall).