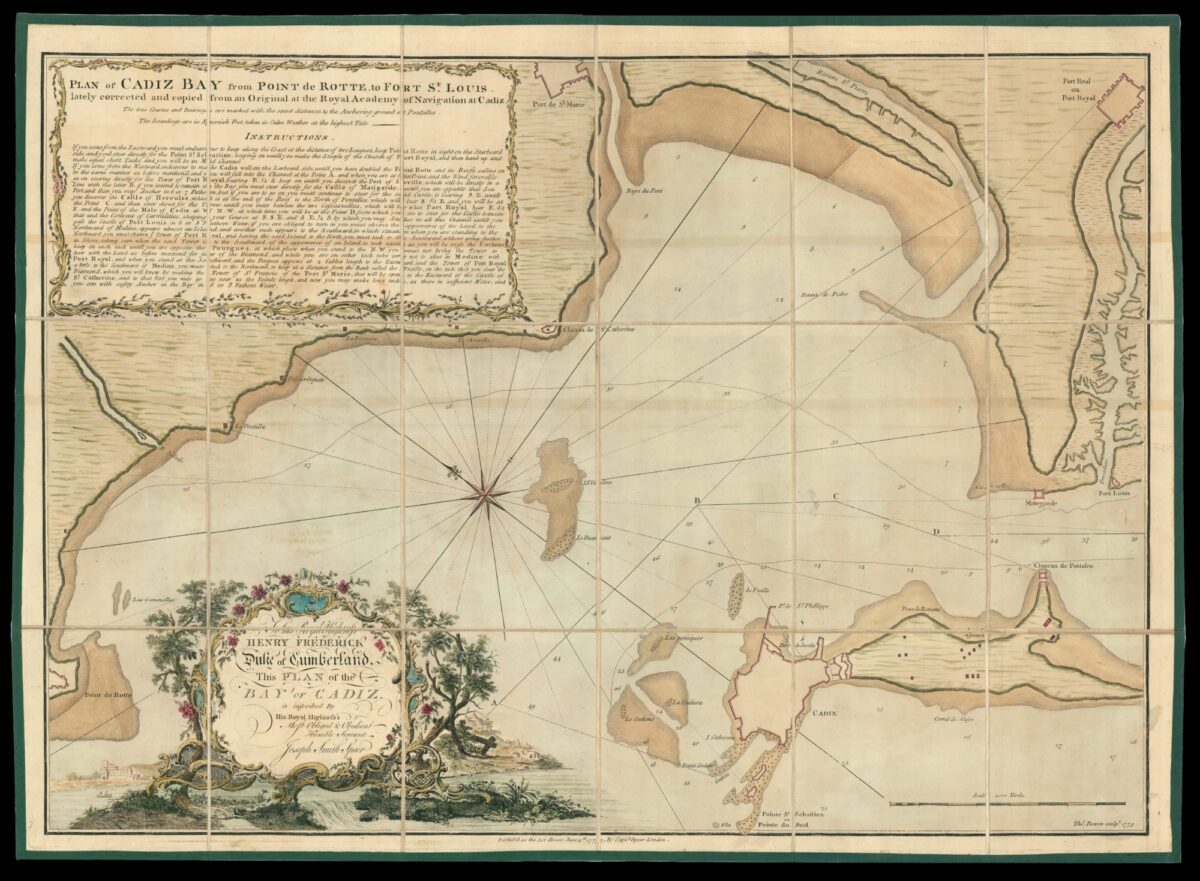 Plan of Cadiz Bay from Point de Rotte to Fort St. Louis latesly corrected and copy from an original at the Royal Academy of Navigation at Cadiz. The True Courses and Bearings are marked with the exact distances to the Anchoring ground at Pontalles. The Soundings are in Spanish Feet, taken in Calm Weather at the highest Tide

A magnificent map of the Bay of Cadiz, with the title and extensive ​“Instructions” set within an elegant cartouche. The ​“Instructions” give accurate information on how to enter the port from every direction: ​“If you come from the Eastward you must endeavor to keep along the Coast at the distance of two Leagues…”. Speer’s dedication to Henry Frederick Duke of Cumberland appears in a very elaborate vignette cartouche, showing the Spanish coastline in the background.
After Columbus’ discovery of America in 1492 Cadiz soon became the home of the Spanish treasure fleet, and a target for foreign countries seeking to strike at the heart of the Spanish Empire. Sir Francis Drake famously destroyed much of the Spanish fleet there in 1587; it was blockaded by the British in 1797–1798, and bombarded by them in 1800. Between 1800 and 1812 it was besieged by the French while it valiantly maintained its independence against those parts of Spain not under Napoleonic rule.
But by 1773, when Speer’s map was issued, Cadiz’ monopoly on the valuable Atlantic trade route had begun to wane. Beginning in 1689, Britain fought a century-long series of wars with France and its ally, Spain. Even before the French and Indian War (1754–1763) Britain and France competed to control the valuable fur trade on the North American mainland and the rich sugar production on the islands of the West Indies. North American colonies became part of an intense rivalry between Great Britain and France. Each country tried to equal or surpass the economic, political, and military power of the other through colonization, alliances, and warfare.
The Treaty of Paris of 1763 concluding the Seven Years’ War (including the French and Indian War), was signed by Britain and Hanover on one side and France and Spain on the other. France renounced to Britain the mainland of North America east of the Mississippi, its conquests in India since 1749, and the West Indian islands of Granada and the Grenadines. Britain restored to France the West Indian islands of Guadeloupe and Martinique and the West African colony of Gorée (Senegal). In return for recovering Havana and Manila, Spain ceded Florida to Britain and received Louisiana from the French. The loss of American territory combined with a decentralization of trade controls to reduce Cadiz’ monopoly over a still lucrative trade.
Speer’s choice of Prince Henry Frederick, Duke of Cumberland and Strathearn (1745–1790), sixth child and fourth son of Frederick Lewis, the Prince of Wales, as dedicatee of this map, and the four others he published of Spain, was a strange one. He had achieved the rank of Vice-Admiral in 1770, but was also the subject of great scandal in England: in July of 1770 Cumberland was tried for ​“criminal conversation” (ie adultery) with Lady Grosvenor; but even worse, in October of 1771 Cumberland married Anne Horton, a divorced commoner. As a result, Cumberland was barred from the king’s presence. His mother, who was by now terminally ill, also refused to see him and they remained unreconciled at her death. Cumberland’s failure to seek the king’s permission for his marriage led to the king’s forcing the Royal Marriages Act through parliament. Cumberland was also facing considerable financial difficulty, and throughout 1773 and 1774 he and his wife lived in exile on the Continent.
Captain Joseph Smith Speer (ca 1720–1781) had a long career in both the British army and Navy, including 21 years serving with 49th Foot Regiment on the Mosquito coast, present-day Honduras and Nicaragua. Returning to England in 1765 he wrote ​“An Account of the Mosquito Shore”, urging the British government to maintain their colony there in spite of the recent changes brought about by the Treaty of Paris, which had ceded the threateningly near port of Havana to Spain. At the same time, he also petitioned Lord Dartmouth, the then Secretary of State for the Colonies and First Lord of Trade (1772–1775) on November 6th 1765: ​“On his arrival in England he met his creditors who immediately put him in prison. Attributes his misfortune to being obliged to spend his money in doing the duty he was ordered on to the Spaniards, and which he has not charged in his accounts. He has served in the West Indies and on the ​“Musketoe” Shore for twenty-one years. Hopes when his Lordship settles the affairs of the ​“Musketoe” Shore, he will provide for him in such a manner as he considers his services to his King and Country may deserve”. The manuscripts of the earl of Dartmouth, 3 vols., HMC, 20 (1887–96).
It seems unlikely that Speer’s petition was granted, as he was obliged to self-publish his ​“West-India Pilot” in 1766, which included 13 maps of the West Indies, which he drafted from personal knowledge of the area, gleaned over his years of service. By 1767 he was again petitioning the Earl of Dartmouth to retire on half pay; and in 1771, he issued a second edition of his Pilot, this time with 26 maps. In 1775 Speer petitioned Dartmouth one last time for a pension and relief for having self-published his large 2‑sheet map of the West-Indies which had been issued to official acclaim the previous year. Speer clearly returned to service during the Revolutionary War as he is recorded as having died while in Spanish custody in Cadiz in 1781.
Rare: only two institutional examples of Speer’s map of the Bay of Cadiz are known: at the British Library and the Maritime Museum in Greenwich. Two examples have appeared at auction since 1951, both in portfolios with Speer’s four other maps of Spain.