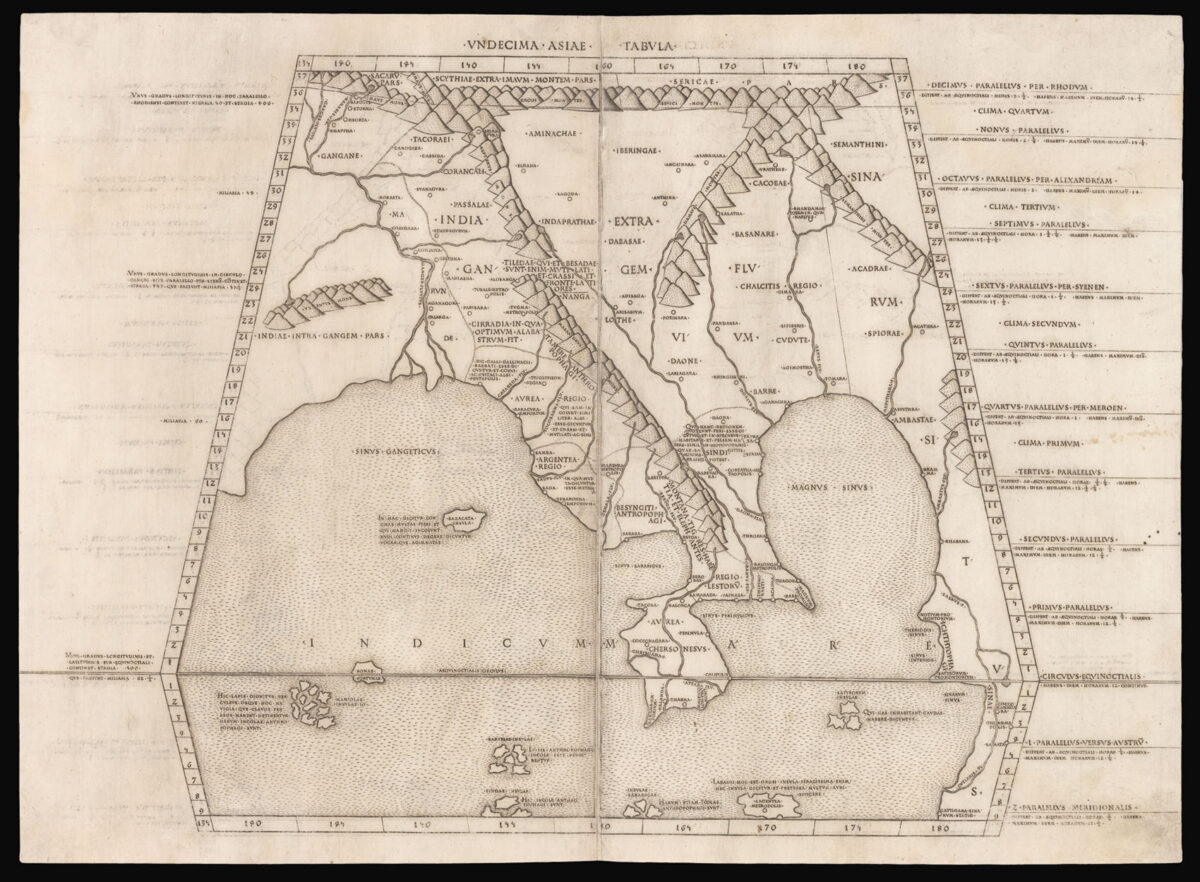 The map shows the Indian Ocean and Southeast Asia.

As observed by Suarez: ​“After crossing east of the Ganges (whose Delta is on the left), we enter Aurea region, a kingdom of gold, which is roughly located where Burma begins today. Above it lies Cirradia, from where, Ptolemy tells us, comes the finest cinnamon. Further down the coast one comes to Argentea Regio, a kingdom of silver, in which there is said to be much well-guarded metal. Besyngiti, which is also said to have much gold, is situated close by…” the Sinus Sabaricus would be the Gulf of Martaban, whose eastern shores begin the Malay Peninsula, and the Sinus Permimulicus would be the Gulf of Siam … A spine of mountains running north from there, in what is now northern Thailand and Burma, is according to Ptolemy, a ​“habitat of tigers and elephants.“

From the second Rome edition. ​“This handsome edition is a reprinting of the copper-plate maps of the 1478 Ptolemy [the first Rome edition by Conrad Sweynheym and Arnold Buckinck, whose] maps are considered the finest Ptolemaic ones produced up to the time that the great Mercator engraved his Ptolemy of 1578… It is believed that Sweynheym was the one who first thought of applying the very new art of copper-engraving to the printing of maps, and he might have taken a hand in the actual engraving of them himself” (World Encompassed). While the Bologna edition of 1477 was the first atlas to use copperplate maps, the present series is generally regarded as superior for its clear captions, accurate projections and overall design. Also, there are indications the Bologna edition was hurried through the press: the captions were not engraved but stamped into the plates. The early Italian Ptolemys, particularly the Rome editions, are ​“superb testimonials of Italian craftsmanship without the picturesque but unscientific monsters of the medieval maps or the addition of the adventitious decoration of later work, relying for their beauty solely on the delicacy of their execution and the fineness of the material employed” (Tooley).