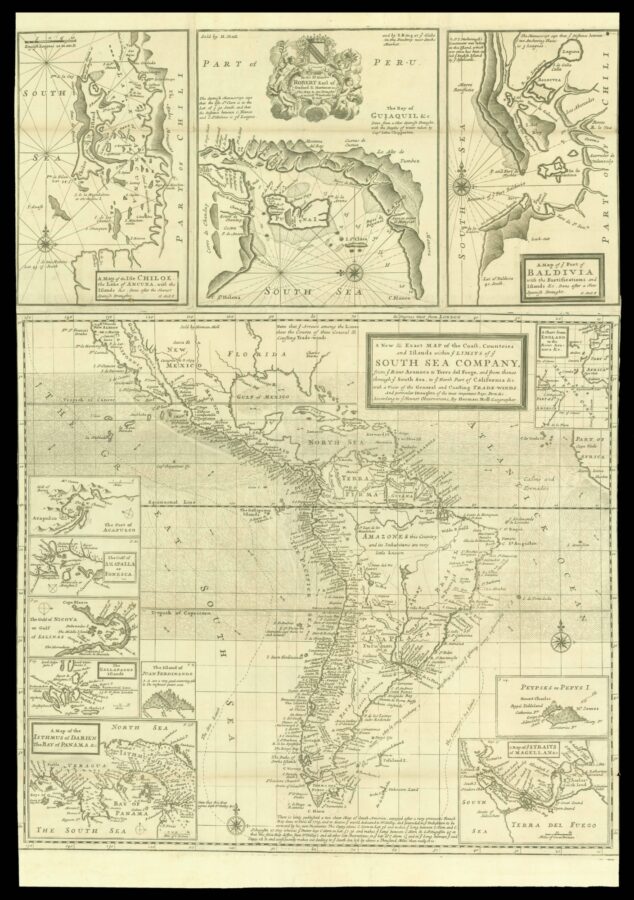 A New & Exact Map of the Coast, Countries and Islands within the Limits of ye South Sea Company from ye River Aranoca to Terra del Fuego and from thence through ye South Seas to ye North Part of California &c. With a View of the General and Coasting Trade-Winds. and perticular draughts of the most important Bays, Ports &c. According toye Newest Observations

A fine map of South America with a number of insets, including across the top of the map three maps pasted to the main sheet: ​“A Map of the Isle Chiloe”, ​“A map of ye port of Baldivia with the fortifications and islands”, and ​“The bay of Guiaquil”, then within main map these vignettes appear ​“A chart from England to the river Aranoca”, ​“Peypses or Pepys I.”, ​“A map of ye Straits of Magellan”, ​“A map of the isthmus of Darien the bay of Panama”, ​“The island of Juan Ferdinando”, ​“The Gallapagos Islands”, ​“The gulf of Nicoya or gulf of Salinas”, ​“The gulf of Amapalla or Fonesca”, and ​“The port of Acapulco”.

Moll, along with his colleagues, Daniel Defoe, William Dampier and Woodes Rogers, shared and promoted a vision of South Sea development bolstered in large part by Moll’s maps of the region. The South Sea Company, charted by Parliament in 1711, was actually conceived by John Paterson, a Scot who also created the Bank of England.

Moll was very political and often used the blank areas of his large-format maps to express his views, for example his dislike of the Dutch & French, especially their mapmakers. (See MapForum online: Issue 6, Treacle & Vinegar). Here his target is not foreigners (Moll was a German emigré!), but the failure to capitalise on Scotland’s resources. He marks the fishing grounds and states ​“if things were rightly managed, there would be no reason to go to Norway for wood or New-found-land for fish; seeing North Britain can Plentifully furnish us with both”.