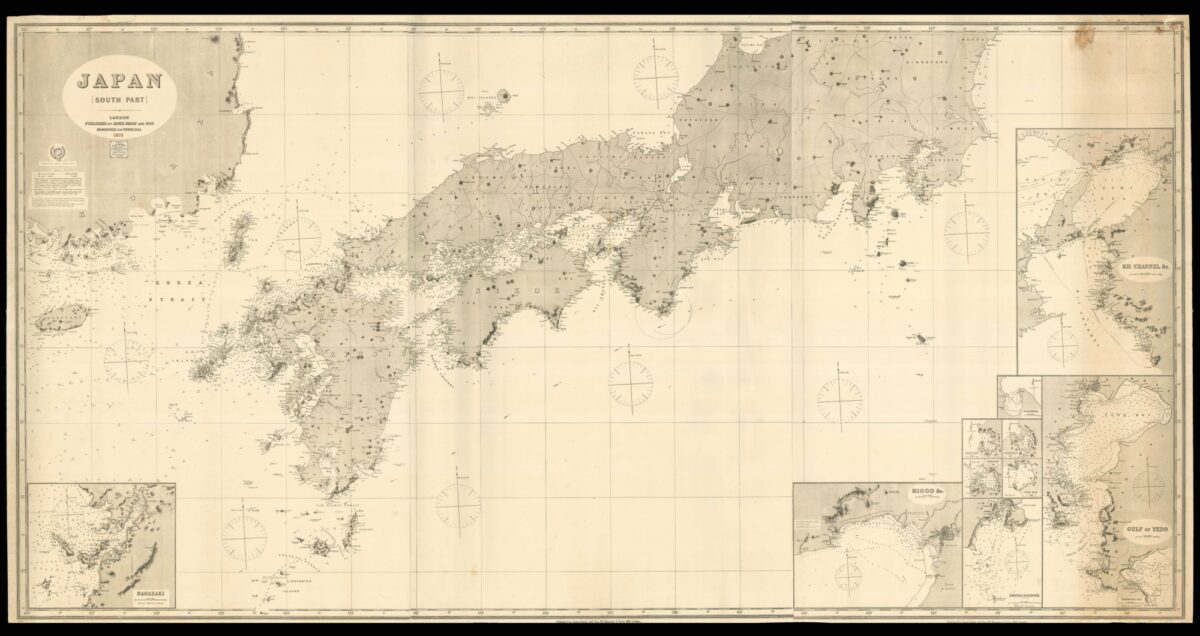 The present chart shows three of Japan’s main islands, Kyushu, Shikoku and Honshu and provides soundings for the important surrounding waterways, including the Inland Sea and the Tsugaru Straits. Several lighthouses are identified in red and yellow, and the inset charts offer more detailed depictions of the important ports and harbours found around the islands’ coasts. Drawing his information from a range of other sources meant that Imray could not always guarantee the accuracy of his charts, however, and many of the toponyms shown here are misspelled, and the soundings grow more sparse towards the eastern half of the chart.

During the nineteenth century, the British Empire was approaching its peak, with territories and subjects spanning the entire globe. As such, this period saw a huge surge in the production and purchase of nautical instruments and navigational charts. To meet this demand, British mapmakers and sellers began to publish charts backed on distinctive blue manila paper, which strengthened them for practical use aboard a ship, as well as cutting costs, as the charts could be printed on lower-quality paper and then inexpensively reinforced with the ubiquitous blue backing. These charts came to be known as ​‘Bluebacks’, and remained popular until the late nineteenth century, when the British Admiralty began issuing superior, uniform charts on high-quality paper.

One of the most prominent producers of ​‘Bluebacks’ was James Imray (1803–1870), who operated a shop in London selling books, maps, charts and instruments. Despite constantly getting into debt, by the end of his career, Imray could be called ​“the leading private chart publisher of the day”, and his firm continues to the present, trading as Imray, Laurie, Norie and Wilson, bringing together the chart-publishing rivals of the nineteenth century. All these publishers had competed with the Hydrographic Office to sell naval charts, undercutting the official Admiralty sales by issuing the cheaper ​‘bluebacks’, which were predictably successful.