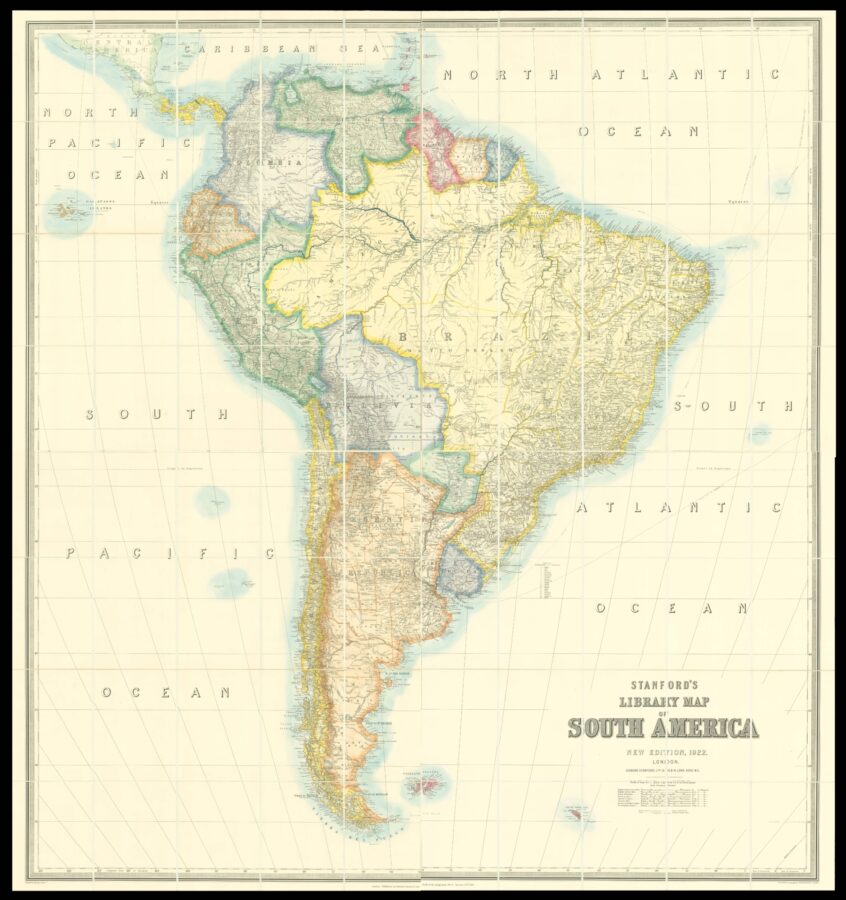 In the early 1850s Edward Stanford commissioned the explorer and geographer Alexander Keith Johnston to prepare large wall maps of the continents: Europe; Australasia; Asia; Africa; North America; and South America. The series, entitled ​“Library Map” was well received by the general public as can be seen by this glowing extract from the ​‘Austrlalian Mail’ of 1859:

​“A bad map exhausts the patience both of the student and the man of business. It is dear at any price, however low. On the other hand, it is a real pleasure to study a good, bold, well-executed map, brought up to the latest date. Mr. Stanford’s new Library Map of Australasia fulfills every requirement. It is quite a work of art. Engraved in the finest style on copper plates, upon the large scale of 64 miles to an inch, which brings the entire size of the Map to 65 inches by 58, it is worthy of a place in any nobleman’s library. It forms the second of a series of large library Maps, delineating the great terrestrial divisions of the globe. The Map of Europe was the first; the Map of Australasia is the second; Asia, Africa, North America, and South America will follow. Instead of giving Australasia as an appendage to the Asiatic continent, the publisher recognises the great and growing importance of the English colonies, by giving them a special map. He is fully justified in claiming admiration of the work. The ​“insertion of several new and important surveys and discoveries, never before published together; the introduction of new administrative boundaries; the boldness and perspicacity as well as the precision of the delineation and names; the distinctive colouring; and the comprehensive scope of the Map,” form only a few of its meritorious features. The manner in which Mr. A.K. Johnston has performed his task is deserving of the highest praise.“

The series of maps proved so popular that they would continue to be printed and updated well into the Twentieth Century.

Edward Stanford (1827–1904), began his career in maps at the stationers Trelawney and Saunders, where he was made partner in 1852 at the age of 25. A year later the partnership was dissolved with Stanford taking over the remains of the business. Edward would turn the business into one of the most important cartographic firms of the nineteenth century, its reputation based upon such maps as his Library series. The firm is still in existence today operating from his purpose built shop at 12–14 Long Acre in London.