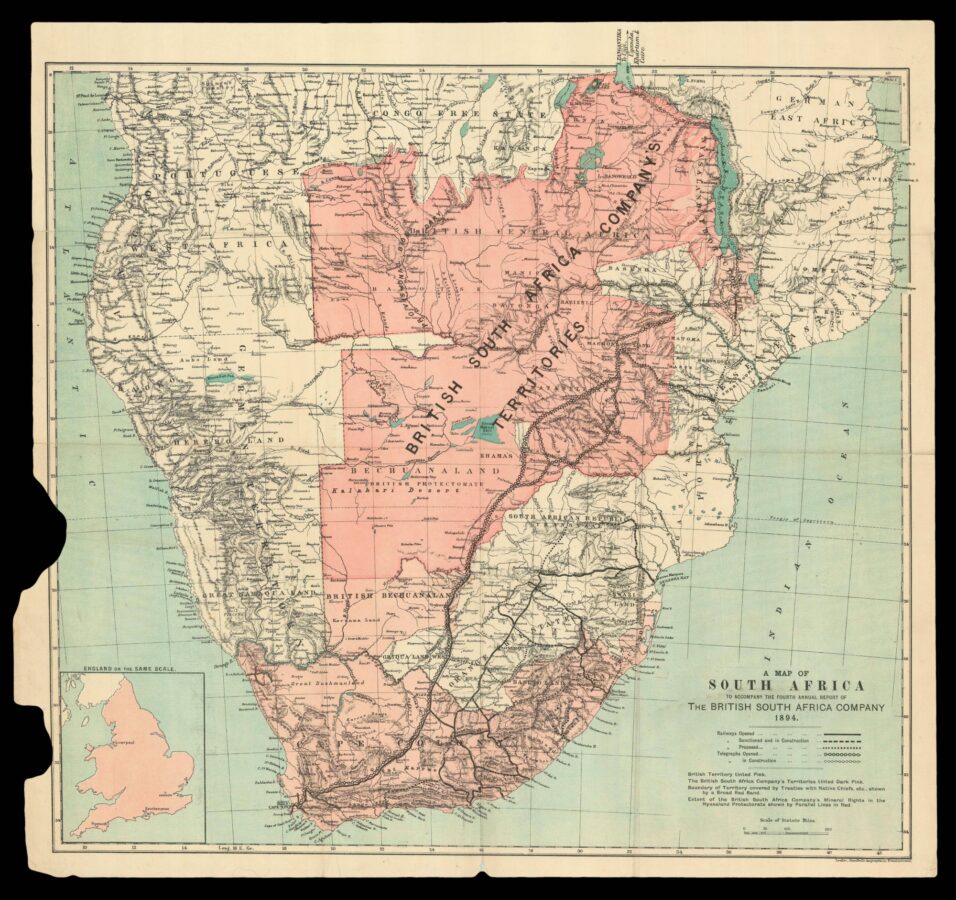 This map of South Africa is distinguished from Stanford’s standard map of the region by the bold pink colour in which the British South Africa Company’s territories are highlighted. Presented as part of its fourth annual report in 1894, this map displays the vast swathes of land controlled by the company. The small inset map of England in the lower left corner offers some perspective on the extent of colonial expansion in Africa. The British South Africa Company had been established by Cecil Rhodes in 1889 to exploit the expected mineral wealth of Africa, hoping to benefit from the miles of goldfields that were reported to lying untapped in Mashonaland. When the anticipated gold failed to materialise, the company found itself in financial difficulties, and many of their enterprises, such as railway expansion, slowly ground to a halt. Nonetheless, the company remained in charge of Rhodesia, as the region was named in 1895, until 1924, when administrative power and control of the land was given over to colonial Governors.

This map records information about the politics, industry and geography of the company’s territories. For instance, the land boundaries agreed upon between the British governors and native chiefs are distinguished by colour. A key beneath the title shows that the network of solid and dotted lines that span the map correspond to the communications systems that expanded throughout southern Africa under colonial control, namely the railway network and the telegraph grid, both operational and under construction. Rivers and roads are also represented, and the relief of the land is shown by hachures. An arrow bisecting the northern border points towards Cairo, alluding to Rhode’s dream of British expansion ​‘from Cape to Cairo’.

This was published at Stanford’s Geographical Establishment in London, founded and run by Edward Stanford. At this point in time, Stanford had already become the sole agent for Ordnance Survey Maps in England and Wales, and had received his royal warrant as Cartographer to the Queen. As well as the Ordnance Survey, he was an agent for the Admiralty, the Geological Survey, the India Office and the Society for the Diffusion of Useful Knowledge. Stanford continued to produce maps for the British South Africa Company, which gradually became larger and more detailed surveys of the company’s territories. This particular map is rare: although there are six institutional examples of Stanford’s standard map of British South Africa on which this is based, we have been unable to trace another copy of this specific example, with its focus on the company’s affairs.