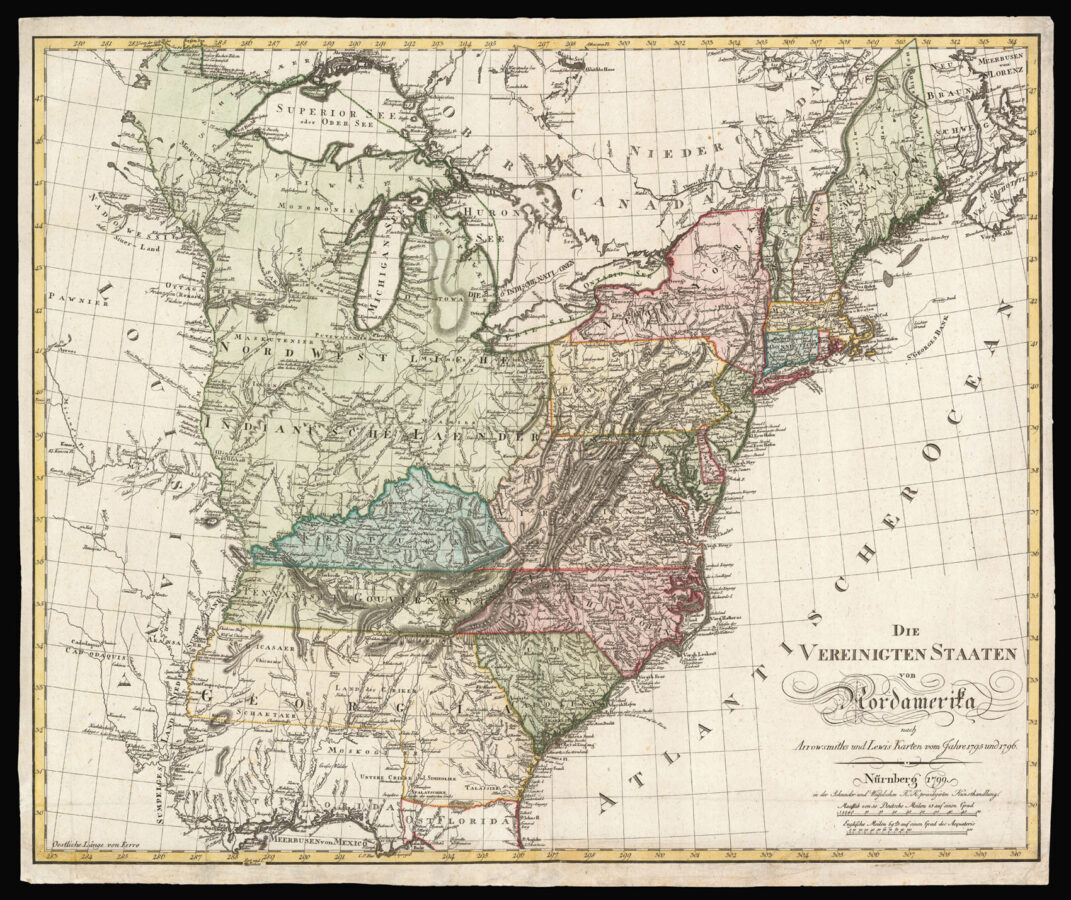 A rare, important and apparently separately-published map of the United States, based on Samuel Lewis’s 1795 and Aaron Arrowsmith’s 1796 maps of the country as well as other unnamed sources. The map was almost certainly compiled by famed German mapmaker Daniel Friedrich Sotzmann, perhaps to accompany his rare suite of ten state maps issued in the late 1790s.

The map depicts all of the then-territory of the United States, including essentially all land east of the Mississippi River, reflecting the terms of the 1783 Treaty of Paris but of course not the 1803 Louisiana Purchase. There is a great deal of detail throughout, much of it extremely interesting and much of it not present on either the Arrowsmith or Lewis maps, indicating that Sotzmann had access to other, even more up-to-date sources. Given the range of sources employed and the up-to-date geographic information, this is among the most accurate maps of the United States produced in the 18th century.

Some of the more thought-provoking features include the massive ​“Northwest Indian Lands,” a name not present on either the Lewis or Arrowsmith map; Connecticut Lands just south of Lake Erie (also absent from the two named source maps); Georgia’s extension to the Mississippi River and its truncated southern boundary reflecting the creation in 1798 of the Mississippi Territory; and the ​“Tennassee Gouvernement,” reflecting its intermediate status just before it joined the Union on June 1, 1796. The treatments of the Missouri, Arkansas, Red and other western tributaries of the Mississippi are based on Arrowsmith and quite good for the period, with many of the resident Indian peoples identified by name.

In 1804 Schneider and Weigel issued a map from the same plate, with no obvious cartographic changes but bearing the revised credit ​“von D.F. Sotzmann auf Ebelings Beschreibung / Arrowsmith und Lewis Karten entworfen.” In 1819 the map was issued yet again, this time with massive revisions west of the Appalachians credited to Nurembürg cartographer I[ohann] N[epomuk] Diewald (1774–1830). It was issued a final time in 1825 , with apparently only a change to the date.

Though Christoph Daniel Ebeling and Daniel Friedrich Sotzmann’s names were not added until the edition of 1804, I am reasonably confident this map had intended for an atlas planned to accompany Ebeling’s Erdbeschreibung und Geschichte von Amerika. Ebeling (1741–1817) was a Hamburg academic with a general interest in free states, which inspired a decades-long fascination with America and led him to conceive the Erdbeschreibung project, a magisterial study of the geography and history of the United States. To this end he carried on a voluminous correspondence with leading Americans, who supplied him among other things with the most up-to-date American maps available (These were purchased by a Boston collector, ​“repatriated” to the United States, and eventually became the nucleus of the Harvard Map Collection.)

To compile the maps Ebeling commissioned Daniel Friedrich Sotzmann, Geographer of the Berlin Academy. Unfortunately neither the narrative nor the atlas were fully realized, perhaps because of Ebeling’s advancing years and (in his view) a lack of sufficiently accurate source material. In all, seven volumes of the Erdbeschreibung were issued between 1793 and 1816, while ten state maps were completed and issued separately–Maine, New Hampshire, Vermont, Massachusetts, Connecticut, Rhode Island, New York, New Jersey, Pennsylvania, Delaware and Maryland—along with this map of the United States. All are important compilations from the best existing sources, and all are scarce to extremely rare on the market. The present map is no exception: Antique Map Price Record listing only four impressions having appeared for sale in the past 30 years (two of the 1799 and one each of the 1804 and 1819 editions).

In all, a lovely full-color example of a rare and significant map.